It’s Awkward: Learning to Empathize and Looking for Empathy

It’s Awkward: Learning to Empathize and Looking for Empathy

(or — What I learned from the red straw in Shinchon)

There is a red work of art that is almost always at the center of attention in Shinchon. Its most noteworthy feature is its humongous size, and, as for the rest of its anticlimactic features, there is really nothing much to say anything about. It looks like what I can only attempt t

o describe as the curved end of a straw with a reflective surface inside it, and that seems to be the thing that has been constantly attracting people to it for all these years. Every time I pass by its strange presence and catch myself internally casting judgemental looks at all the people standing around it (who have obviously lined up to take photos of themselves in the reflection but are trying to casually act as if they were just standing around because they’re too cool to admit their selfie-crazed nature), I try to think about the first time I saw the Chicago “bean” and how I was that person that one time as well (the “bean” in reference is a large bean-shaped artwork at the Chicago Millennium Park, made up entirely of reflective surfaces, readily making it a selfie-for-all landmark).

Since I’ve returned to Korea after having lived the last four years in the States, I’ve found myself to be constantly comparing and criticizing – aka being judgemental – almost everything. From the horrifically small amount of Caesar dressing provided in a salad to the unwritten rules of beauty that everyone seems to be abiding by, I just keep finding things that don’t sit well with me, and it creates in me a false confidence – I feel all superior and cultured for a split second, just to be followed by lots of commiserating with myself and feeling like I’m not a good person (which I know I am not, but it’s still not nice to feel that way).

In this probably-never-ending process of being in a culture other than what you are used to or what is yours, there will inevitably be moments of frustration and panic, accompanied by plenty of awkwardness. I think it’s just the way it is. What I am learning slowly, however, is that we will always find something to criticize and complain about. For instance, I find myself complaining, now that I am in Korea, about how low the minimum wage seems to be and how incredibly hot the summer is, but when I was back in the Midwest I was complaining about how long the winters were and how people kept asking me which side of Korea I was from. There will always be something to complain about, and I think you can either let it keep bothering you or have a laugh about it – it’s a conscious choice though, obviously.

The icon on the left represents what is in my opinion one of the most popular and current buzzwords/concepts, which is ‘공감’ or ‘공유,’ in Korean (gong-gam, gong-yu). It is the share icon, and I think captured within it are concepts such as empathy and understanding. Whether you’re like me and you keep experiencing these strange cultural moments, whether you’re an expat feeling as though you’re not getting better at this Korean life, whether you’re a Korean-American who keeps getting complimented on how perfect your English is, and whether you’re a Korean with an immense amount of awkwardness to exude around foreigners  – I think it’d be absolutely great to have a place we can share these things and savor these moments together.

So it really does not have to be all perfectly written and everything – just tell us about that one Korea-moment when you found yourself either extremely flustered, or just a little bit awkwarded out, or secretly chuckling inside, or experiencing an incredible epiphany. Depending on the submissions and how many we receive, I’m looking to either collect and compile them into one mega-anthology of an article or simply publish some of them at a time. Who knows? I’m feeling quite ambitious.

At the end of the day, I think we all just want to be understood, at least by some people and at least to some extent, and be able to rant or laugh about these so called Korea-moments. No one likes haters, so the best we can do is try to be better haters – the ones that don’t flat-out just hate on something because it’s different, but rather the ones that know how to think in retrospect, the ones that know what it means to be respectful, and the ones that can embrace all of the awkwardness and be cool with it, perhaps even laugh about it a little. As exhibit A, I’ve included here a crummy but hopefully remotely cute comic strip I whipped up last night, in which I’ve tried to illustrate how I struggle with taking the trash out here in Korea. Sure, it’s great to be resourceful and I’m sure it’s doing a great service to nature, but I probably will never get used to remembering which day of the week I’m allowed to take my trash out and which color plastic bag I’m allowed to use for specific kinds of trash! 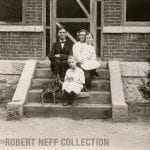 Life in Wonju a Century Ago

I must say, I still crack a chuckle when I see people lined up in front of that red straw in Shinchon. I would like to, however, end my rant for today by telling you about the one fateful night when my perception of the red monstrosity changed just a tiny bit, and for the better. As I was waiting for a friend and just lazying around the Shinchon area one night, I noticed a group of young Koreans shuffling around in front of the red. Of course, I thought, yet another group of people wanting to get a semi-artsy selfie to flaunt. The “line” at that time was not long at all, it having been rather late in the day, but there was one other group of people waiting for their turn — a smaller group of perhaps three foreigners. The Koreans, after they were done with their rounds of selfies, moved aside, and the three men went on with their photo shoot in front of the statue. They seemed to be very excited about it, and their excitement proved to be extremely contagious, because soon enough the group of Koreans were talking to them about Stevie Wonder, taking pictures with them, and just having a grand time, despite the enormously apparent language barrier. And I witnessed what I imagined to be a moment of empathy  — all thanks to a bulging red straw in the middle of Shinchon — and I thought that was pretty awesome.

*Email coordinator@10mag.com with your episode if you feel up to it, and if you happen to be feeling even more generous, comment below and let us know that you are planning to do so – we will let you know if your episode is going to be included in an article and will not forget to credit you in it!