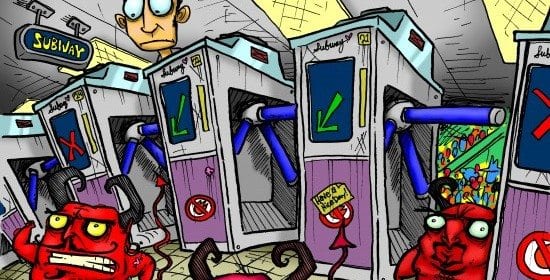 Unaffectionately called the “Hell Train,” Seoul Subway Line 2 circles the heart of the city at rush hour, crushing souls and bodies who dare to enter its doors. Line 2 links to all other lines, testing the limits of capacity and Seoulites’ psyches and physicality. For a year now, I’ve been braving the Hell Train from Hongdae to Gangnam. Jammed between commuters, I’ve had nothing but time to think outside the literal and metaphorical box—and wince. For your amusement, I present my musings.

The subway can be divided into two distinct groups: Those who have seats (Haves) and those who don’t (Have-Nots). A Have-Not who doesn’t want a seat at rush hour is a masochist, martyr, or traveling a short distance. As a Have-Not, I hold on to a hand strap and hover over Haves, looking for subtle clues that they may soon relinquish their seats. Are they leaning forward or slouching? Are their fingers fidgeting or arms crossed? Is she checking the mirror? Is he adjusting his tie? When Haves use too much body language, I wonder if they’re intentionally messing with my mind.

To nab a seat, you need an effective strategy. On my morning commute, I hover over Have students in high school uniforms and university letterman jackets. High schoolers are usually just a few stops from school, and letterman jackets essentially advertise where university students get off. If I were on Line 6, I’d hover over Have foreigners heading in the direction of expat-friendly Itaewon Station. Call it subway stereotyping.

Sometimes mere seconds separate those who sit and stand. As a result, some Have-Nots develop over-aggressive strategies in order to become Haves. They get on the subway before letting others get off. They try to snatch a newly vacated seat from under your nose. These Have-Nots are more likely to get seats by faking pregnancy or injury than to offer their seats to a pregnant woman or the disabled.

If a salesperson ever makes their pitch during rush hour, I’ll buy whatever they’re selling—mini-flashlight, mosquito tennis racket, Christmas CD in July—out of respect for the hustle.

I’m ready to rep Line 2. Why is no one selling subway t-shirts? Where are “free hugs” people when you need them?

Some say the subway lights are too bright; I say they make for good people-watching. What if each subway station had a signature song? The station master could be the DJ, and the song could play as the train slows down. Songs could be matched with stations by title (Ex. “Gangnam Style” and “Itaewon Freedom”) or genre (Ex. Independent music for Hongdae and EDM for clubby Gangnam).

Does Seoul Metropolitan Subway account for body heat? The Hell Train can get scorching hot in summer and winter. How about a coat check-in for the latter? While I’m aware that different subway cars have different temperatures, it’s like: Which sauna room should I enter at the jjimjilbang, or to which circle of hell shall I be banished?

I once fell asleep on the Hell Train and woke up to the janitress poking my shoes with her broom. The car was completely empty and silent. Everything was spotless. I’d reached the final destination.