Get Your Gayageum On 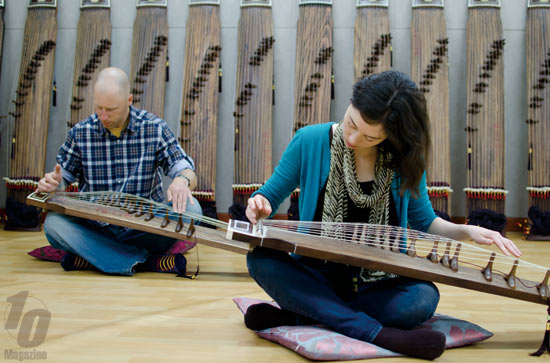 Have you ever taken the KTX? If so, you may have noticed that when the train slows down before a station a certain tune comes on, gently reminding you that the train will be stopping soon. The music is sparse, minimal and distinctly oriental. The irregular notes evoke images of water slowly dripping from a hanok’s tiled roof. Each note, surrounded by silence, vibrates beautifully and pleases not only the ear but the mind as well. It is a far cry from the cacophonous boy/girl band pop music presently dominating the Korean airwaves.
After hearing this music each time I took the KTX, I finally asked my Korean friend about it. She replied that the sound was made by a gayageum (가야금). A gayageum? I had never heard of it! She informed me that it was a traditional Korean musical instrument. My curiosity was piqued.

I started by researching the history of the instrument. The gayageum is aptly named after the ancient kingdom of Gaya, though its historical origins are widely believed to be Chinese. The gayageum shares a basic shape, form and sound with other instruments collectively grouped in the Asian zither family. In addition to the Korean gayageum, this family includes the original zheng from China, the Mongolian yatag, the Vietnamese đàn tranh, and the Japanese koto.

Historical records suggest that King Gasil of the 6th century Gaya confederacy ordered a 12-string instrument to be built after hearing of the Chinese zheng. He then commanded (as kings tend to do) a musician named Wooreuk to compose twelve new pieces for the newly built instrument. Soon after, Gaya fell on hard times, and Wooreuk, fearing for his music (and life!), requested permission to take refuge in the neighboring Silla Kingdom. It is a testament to King Jinheung of Silla that Wooreuk, his instrument and his music were not only accepted but highly prized within the royal court. King Jinheung even ordered three talented young government officials to study with Wooreuk in order to learn the gayageum’s music.

Here the story takes a strange twist. Behaving in a way that would now be deemed blasphemous by Confucian standards, the three students actually criticized their master’s music, calling it too chaotic. Kyego, Bupji, and Manduk amended the original twelve pieces to include five new compositions. Even more surprisingly, Wooreuk cried tears of delight when he heard the new music, reportedly saying, “There is joy (in this music) but it is not exaggerated, and there is sadness, yet it is not too painful. The music you play here is certainly just as it should be.” The Gaya confederacy fell in the 6th century, and Silla later in the 10th, but the music created in their kingdoms is alive and well in present-day Korea.

After discovering the gayageum’s existence, I wanted to learn more about the instrument. After a little research, I found a shop that specializes in helping foreigners understand Korean traditional culture. I went there soon after and told them how much I enjoyed the short snippet of gayageum music on the KTX. The informed staff there suggested I listen to a CD by Korean musical legend Hwang Byung-ki. They played a song for me right there in the store and I was immediately hooked. I bought the CD and listened to it extensively over the next few months. I even went to several of his concerts, including the Hwang Byung-ki tribute concert at the Seoul Arts Center.

But just listening to gayageum music was not enough. So enthralled was I that I decided to learn the instrument, despite my inability in the past to even play the recorder. I am now enrolled in a gayageum course open to foreigners at the National Center for Performing Arts (국립국악원) near the Seoul Arts Center in Seocho-gu. We meet every Saturday for 2 hours in a group of 15. The course is taught in English and Korean and for the very reasonable fee of W30,000, each student gets to learn on his or her own gayageum. The courses are fast-paced, challenging and require more than a minimum of musical talent and devotion. The courses last 3 months, and those students that make it through can don hanbok and play in a final performance in one of the lovely halls attached to the complex. The next term starts in mid-September, but classes fill up quickly. If you want to take advantage of this wonderful chance to participate in Korean culture, don’t wait to sign up.
2364 Nambu Sunhwan-ro, Seocho-dong, Seocho-gu, Seoul. http://www.gugak.go.kr/site/main/index001 02-580-3300

A String of Gayageum Schools
You don’t have to live in downtown Gangnam to learn how to play the gayageum. See the list below for more options, most of which include instruction in English.