Dating In Korea: From Stereotypes To Statistics

In 2014, OkCupid co-founder Christian Rudder released his book Dataclysm, using statistics from millions of profiles to make conclusions about the thoughts and behaviors of daters in the United States. Spoiler alert: it’s rough out there, and people are kind of awful.

No, really. Beyond witty analysis of the interests of different demographic groups, Rudder found that people were often racist in action even if not in words, that many were prudish, and that, yes, beauty kind of gets you everywhere.

The news wasn’t all bad, though. He also showed that some more sinister stereotypes did not ring true in action, and that there is some benefit to “letting your freak flag fly.”

Channeling Rudder’s initiative, 10 Magazine surveyed 740 foreign and English-speaking Korean respondents online to get their opinions on love, online dating, and the scene in general, along with asking for personal anonymous stories.

What we found in Korea was similar to Rudder’s U.S. data in that some stereotypes hold fast, but there are always some surprises. 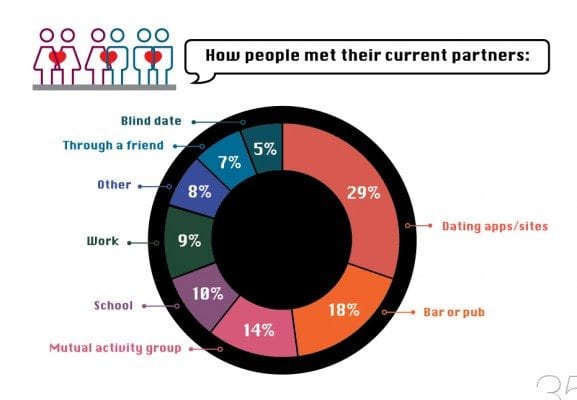 You arrive in Korea. You ask about dating. Stereotypes abound.

“Koreans are all about the romance and formality. Have you seen K-dramas?”

“Foreigners are ‘easy.’ Have you seen MTV?”

Of course, it’s never that simple.

One thing is certain in Korea’s international dating scene: birds of a feather are NOT flocking together. Only 16% of non-single respondents have a partner of the same nationality as them, and within the sample, mixed Korean-foreign couples thrive: 66% of foreign males and 47% of foreign females had a Korean significant other.

In terms of the data, some significant findings did arise in terms of views on love, sex, and marriage in Korea’s international dating scene.

For example, a common idea is that in Korea, upon turning 30, the clock is ticking for a woman to get married (or presumably, die alone). In actuality, the majority of respondents, whether Korean or foreign, had no ideal age range. For those who did, though, age 30-34 was indeed the hot spot, chosen by 35% of foreigners and 48% of Koreans.

Marriage aside, in terms of when it was okay to have sex, twice as many foreigners as Koreans specifically said it was okay for a couple to have sex right away. The opinions on this were strongest for foreign men, 37% of whom said immediately was okay, and Korean women, of whom only 11% thought right away was acceptable.

The only gender gap for women seemed to be when it came to mixed Korean-foreign couples. Couples with a foreign woman and Korean man were 10% less “natural” to respondents overall than couples with a foreign man and Korean woman. Actual statistics of existing couples presented an even more exaggerated view, as nearly 20% more foreign men had Korean partners than foreign women did.  Surprisingly, this bias against foreign women persisted even for gays and bisexuals, with almost 20 percent less female-female mixed Korean couples existing than male-male ones.

So maybe we’re all a bit biased with our choices in the beginning, but what about once a relationship starts?  How romantic are we really, in the numbers? 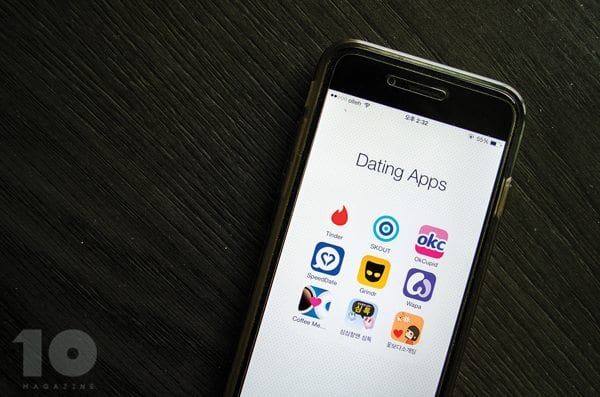 Online dating has a (deservedly) bad reputation. People lie, withhold, “Photoshop,” and often make things weird nearly immediately. But unfortunately, dating sites and apps are the most common way to meet partners—29% of non-single respondents had met their significant others this way (the next highest group—at 18%—met their partners in a bar or pub). In the Korean international scene, OKCupid seems to be the most popular, followed by Tinder, Skout, and then various other dating services.

Then what should we include to maximize our positive swipes and get more suitors?

First, it may come as no surprise that nearly everyone shies away from picture-less profiles, though Koreans were 15% less deterred. Foreign females were the most bothered by the absence of a picture of any group, with 92% saying they would have less interest.

And should you put your pet in that picture?  Foreigners and females are more into people with pets. 49% of females had more interest in profiles with pet pics. Korean males were not so pet-friendly, however: 45% said this would lower interest.

Fitting another common stereotype, twice as many Koreans (42%) viewed those with tattoos in their picture as unfavorable. This was especially true of Korean men, of whom 58% said that tattoos were a deterrent. Meanwhile, on the flipside, 29% of foreign women actually had more interest in those with tattoos.

And what of the profiles that mention sex directly, as so many seem to? 83% of females shied away from those, but only half as many males did. In fact, almost 20 percent of males said that mentioning sex directly would make them more interested in a profile. On reflection, these numbers seem deceptive, though, since more than half of respondents (both men and women) answered that dating sites and apps were mostly for “hook ups” anyway.

Lastly, while this may come as no surprise considering the wealth of English teachers in Korea, the majority of all demographic groups dislike poor grammar in dating profiles. Interestingly, females were 20% more likely to be deterred by bad grammar, whether foreign or Korean.

The bottom line: if you are woman seeking a man, cover your tattoos and hide your cat. If you are a male seeking a woman, put your shirt back on, be more prudish, perfect your grammar, and get yourself a puppy.

To Cheat, Or Not To Cheat? And How…

And are people really cheating left and right, as we like to assume? Perhaps not, but the opportunity is there, more than ever.

Earlier this year, Korea nixed its anti-adultery law, meaning that citizens could no longer be jailed for infidelity. The Wall Street Journal noted that this led to an immediate surge in condom sales, for one, and besides this, a number of online options for finding “discrete” partners began to pop up.

Surfing through as a female in a smaller city (Jeonju), I was immediately surprised by just how many local profiles there were and how direct they seemed to be. More than half were marked as “attached.” One attached male foreigner used a tag stating “excitement is everything,” another that he was “looking for adventure.” An attached Korean male proudly displayed that he was a “Terminator” in bed. Most men had chosen their goal as “Anything goes,” and a surprising amount of them had done very little to hide their photo identities. I even noticed an obvious acquaintance at the top of the list. Within half an hour of signing up, I had received a picture of a naked chest and a message from an attached man stating, “I want to make u hot… I have the talent to do it” along with a cell phone number to call for meeting up later that day.

Conversely, surfing a male account, I immediately noticed that almost no women had uploaded pictures—not even using the site-provided mask and blur features. The females available were mostly over 30, almost entirely Korean, and not nearly as “forward” in their usernames or tag lines as the men. There were also only a handful of them in the local region.

Some find this site reprehensible, while others find it simply honest. After all, the same scenarios play out on Tinder and Skout (as well as others) every day, often with less upfront intentions. One foreign female respondent noted meeting a foreign male on Craigslist whom she thought to be divorced. “We ate out, went to bars, walked around, saw the sights, held hands, and had crazy amounts of very good sex,” she said. “He was sweet, kind, funny, gentlemanly. And then his wife sent me an email. So it ended.”

With this sort of story in mind, consider that, while most are against cheating, nearly a quarter of Korean men surveyed said it was natural for couples to cheat on each other sometimes. Fear not, though – the vast majority of people in the Korean dating scene (of all demographics) still find cheating unnatural—on the whole, 87%.

The Elusiveness of LGBT Dating?

Some might muse that members of the LGBT community are less likely to find love here, given the pressures and stereotypes, but of those surveyed, 65% had partners. Of those, 39% had Korean partners.   However, there are challenges that are unique to the scene.

Some gay respondents noted that they didn’t feel comfortable meeting in their own cities, and sometimes traveled as much as several hours away to a central point. They also noticed a striking lack of attention or stares when together, though, and suggested it was because no one even considered a same-sex pair walking beside each other as possibly being gay.

“It often seems as though gay is not an option at all,” said an LGBT American respondent who moved to Korea only this year. “Queer in Korea is, as Irish poet Oscar Wilde wrote, ‘The love that dare not speak its name.’”

Meanwhile, online dating in the LGBT community is in many ways similar to straight dating, but usually with an accepted further anonymity. Respondents noted a higher percentage of profiles here have no picture whatsoever, or a picture of just a headless body. Also, some are reluctant to give real names even after extensive chatting. Respondents explained that this was sometimes just for fear of “outing themselves” in a still-judgmental country, while now and then it was to avoid other issues.

Speaking of a female suitor she met online, one woman noted, “After searching her name on Facebook, my heart sank to my stomach. Her evasiveness made sense: the photos were a vast array of her in a white wedding dress, demurely smiling with a bouquet of pink roses in hand. All talks of dating were off the table at that point.”

“Being part of a non-mainstream orientation makes it extremely difficult,” another bisexual foreign male noted. “Korean girls really are afraid of it, and Korean guys are turned on by it.” And, as several respondents noted, even many LGBT foreigners are reluctant to publicly show themselves for fear of judgment.

On the bright side, respondents noted that several LGBT-focused apps and sites had gained traction in recent years. Among them, the globally popular Grindr and regionally/nationally popular Jackd and WhoQ (pronounce “Hook”) seemed to offer some potential gold at the end of the dating rainbow.

Be Who You Are

Perhaps the most useful takeaway from Christian Rudder’s original OKCupid study is related to our abnormalities. People appear to be drawn to the unique more than the conventional, both in terms of beauty and otherwise, and highlighting any “polarizing feature” of oneself (examples could be distinct piercings, an object representing an odd hobby, etc.) increases the likelihood of someone making contact. It’s the differences, it turns out, that are the most important.

To illustrate, several years ago, a foreigner in Seoul—who chooses to remain anonymous—wore a white plastic horse head to a speed dating event in Gangnam. His intent was to see whether women really valued personality more than looks, but perhaps he was hitting on something deeper.

“One might argue that I ‘appeared’ attractive since the peculiar mask did set me apart 100% from all the other guys and put me in a class of my own,” this cosplay Casanova noted. “Did I get messages? Yes, the maximum amount allowed and more.”

Maybe a plastic horsehead is taking it a little too far in most cases, but the sentiment seems to be true: if you can’t be what everyone wants, be weird. Be you. Despite all odds, it kind of works.

Stereotypes and statistics aside, perhaps that is the bottom line. There are always outliers in every spectrum, and the expat dating scene is itself an anomaly in many respects. Perhaps the best we can do is just to roll with the crazy, cryptic, culturally diverse punches as they come.