A Taste of Korea: Get It While You Can! Hwae (aka Sashimi) 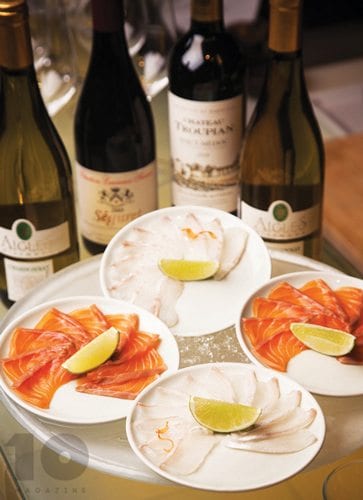 Anyone over the age of 40 remembers that when we were young kids, no Westerner in their right mind ate raw fish (hwae or sashimi). That was just crazy. But these days sushi is old hat in most any country and has become one of my personal favorites. Now is a great time to try the Korean version of hwae, as it’s still cold out and therefore guaranteed to be fresh. Be ready though. It may be a little different than what you’re used to.

First off, you should understand that Koreans prefer their hwae in much chewier textures. While most Westerners reach for soft, melt-in-your-mouth cuts of tuna and salmon, Koreans like the nice chewy taste of halibut (flatfish, 광어) and rock cod (우럭). The flavor is subtle and the texture is tougher, but a little dip in the soy sauce and wasabi and it will grow on you quickly. There will also be a second dipping: red pepper paste sauce. Sacrilege to a Japanese connoisseur, Koreans love to give their hwae this spicy treatment, then wrap it up with a little lettuce and pop in their mouths. It’s followed by a nice swig of soju and… khaaa!

You should also know that at any nice hwae restaurant, some of the most bizarre foods in the country will come out just before your hwae arrives, and all on one plate. Raw gae-bul (개불), is that phallic thing you see floating in the tanks outside; raw sea squirt (멍게) is that orange-red heart-looking stuff you see sitting in the baskets; and then there’s the raw, squirming octopus (산낙지).

So get your adventurous eating hats on, because you never know when that crazy food you’re trying today will someday become one of your favorites.

This hwae haven in Hongdae offers good-quality raw fish sets for only W35,000 a head. Thanks to their in-house shipping transport and connections to local fisheries, you can try sea squirt and gae-bul plates or fresh halibut sets plus tons of sides without breaking the bank. 353-103 Yeonhui-dong near Hongdae Stn. (line 2 exit 4). 02-324-7227

Below pick by Ggot-nim Lee.

Try the Hwae Jeongsik for an enormous course meal of every type of sashimi you could ever want. This meal event comes with raw lobster, bamboo crab, abalone sashimi, beef and octopus tangtangi, and a huge table of sides that runs the gamut from duck meat salad to savory pancakes. 1230-5 Chipyeong-dong Seo-gu, Gwangju. 062-384-9696