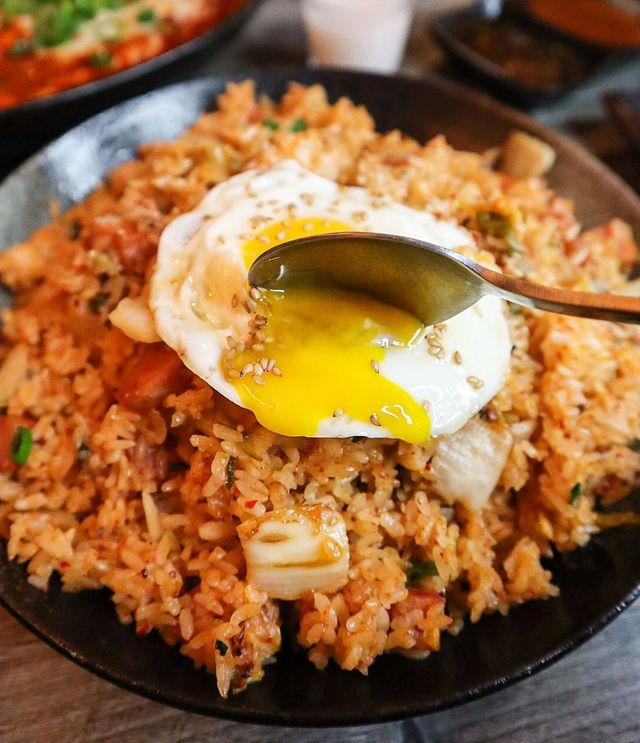 Kimchi Bokgeumbap, Kimchi Fried rice, is a delicious cuisine of the masses of is best served up at a regular old Korean “shik-dang” (식당). If you look in a Korean-English dictionary for the word shik-dang, you will see the word restaurant, but there is a big difference between a “shik-dang” and a “restaurant” in colloquial Korean.

A shik-dang is a mom and pop store that serves up Korean food, usually fast and on the cheap. A 레스토랑 (restaurant), however, happens to be a much classier affair, and you would never refer to an Italian or other foreign restaurants as a shik-dang. It is always a 레스토랑. This is another one of the many ways that the English version of a word has somehow adopted a more upscale meaning, while the Korean word is used for the more plebeian version. But I digress.

Kimchi Bok-geum-bap (김치볶음밥) is made from sour kimchi (신김치) which means that it has fermented a little longer than your average kimchi and therefore has a very tart taste. This dish is a popular way of dealing with kimchi that’s been in the fridge a while and may be on the verge of going bad. It’s also a great method for dealing with yesterday’s rice and all of those vegetables that were too much for the original recipe and need to be dealt with.

Preparation is relatively simple, but since the vegetables take longer to cook, you have to be a little careful. The kimchi is cut up into small pieces and fried together with onions, carrots, and other vegetables until softened, and then they throw in the rice and continue to fry it all up together a little longer. It is then topped with a sunny side-up egg (sometimes slightly undercooked) and served to you piping hot. If you’re eating out, you get this plus four to six side dishes all for around W5,000. You can’t beat a good old-fashioned Korean shik-dang for a filling meal at a great price!