A Happy Ending – A Guide to Korean Insects 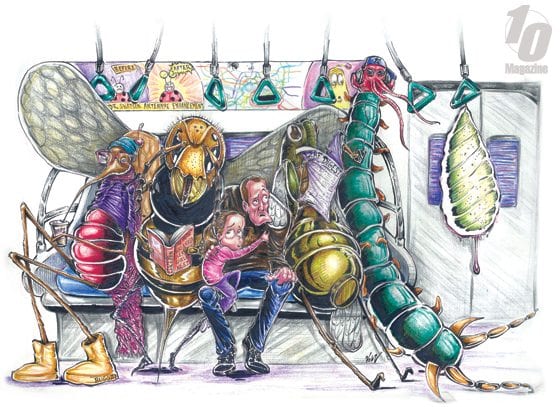 Anopheles sinensis (모기; Mosquito).
A. sinensis are spontaneously generated in threes when you close a screen window, plug in an electric mosquito repellent, or kill one. They thrive at temperatures between cold enough to kill you and hot enough to kill you. They enjoy feeding upon my daughter’s face, and I enjoy feeding them death with the palm of my hand.

Scolopendra mutilans (왕지네; Chinese Red-Headed Centipede).
S. mutilans—ahem, *mutilans*—can reproduce the shrieking noises of its terrified victims. It begins its hunt by telepathically haunting the dreams of its prey. The prey, waking from its nightmare in a cold sweat, then typically wanders outside for some fresh air where S. mutilans lays in wait. Its venom is a neurotoxin chemically identical to despair, and symptoms of toxicity include crying out your actual soul. Antivenom is extremely difficult to obtain because few people are comfortable milking tears from refugee orphans.

Sphinx ligustri (박각시나방; Sphinx Moth).
Produces one of Korea’s largest caterpillars. The caterpillar is about 10 cm long, bright green, and has thin, white diagonal stripes along the side of its body. It also has a scary-ass 1.5 cm black thorn on its tail end, which it uses to warn predators as well as me, because I’m sure as hell not touching that thing directly. I mean, I’ll pick it up with a stick because that’s a cool bug, but you do not want caterpillar venom in you. My wife’s sister got stung by a S. ligustri caterpillar near Daegu and all the bones in her left hand dissolved, so now it looks like a squid or something. She doesn’t even go to her children’s piano recitals anymore because, you know, there’s a lot of pressure to clap.

Vespa mandarinia (장수말벌; Asian Giant Hornet).
If you see one outside the top-secret North Korean military lab where they are engineered, you should just evacuate your bowels now and make a run for it. I don’t even think they’re venomous; they’re just like one of those Kung Fu guys that turns and uses his powers for evil. Upon killing you, it then proceeds to kill you again, after which it will use your ID to track down your parents and taunt them with news of its exploits. V. mandarinia are booby-trapped and highly flammable. Don’t even try to grab your wife or kids first, because they’re just going to slow you down.

Oncotympanafuscata (참매미; Dusky Cicada).
O. fuscata typically begin their loud chirping (in excess of 100dB) in early July and continue this nonsense through mid- to late September. Calling the police on them does nothing to shut them up because they just clam up when approached, telling the police it was the cicadas in the next tree over making all the racket. From October through June they are presumably passed out drunk somewhere.

Andrew Barbour  is a Connecticut attorney working in-house in Seoul.
Pat Volz is a former Las Vegas caricaturist and current Seoul English teacher. His artwork has appeared in online and print publications from Austin to Australia, and a few places in between.

A Happy Ending: Your Kid is Ugly