10) DON’T eat or import poutine. We all enjoy our local stuff that no one else cares for. In fact, Korea has bunndaegi and heong-oh, and Koreans will sometimes latch on to most anything as a trend (Standing Coffee Blue-Ade or some delicious churros, anyone?). Every country has these things… it’s just that some of them should never be shared. And if you just can’t miss this gastronomic delight? Saturday and Sunday mornings in Jeongno, Itaewon, etc? Bring a spatula and flip up a few soju-blossoms from the sidewalk, add curds (if needed), and you’re away!

9) DON’T be a relationship gamer. It is quite sad enough to be a meta– strike-out-king in your home country, skilled at questionable and embarrassing ways to be shot down with people whom you share a culture with. Don’t come to Korea and think it will be any easier.
Alas.
It is the same, or harder, and your BIO-1/evolutionary-dating tactics are going to work worse here than they EVER did back home. So, back to your grannies’ basement with you!

8) DON’T be radical body modifiers. I think it was Ricky Gervais who noted that a tattoo of a rainbow on your lower back will eventually devolve into an octopus attacking a starfish. And those expansion-rings in your ears? In 25 years they’ll be nipple rings, and 10 years later guys with Prince Albert piercings will finally have something to hook them to. And I suppose the grandchildren can swing on them.
So, maybe I was too hasty judging this one?

7) DON’T live outside of Seoul. Ask a Korean. Everyone wants to live in Seoul. It’s like that New Yorker cartoon that showed New York in the forefront of the US, as everything else faded away 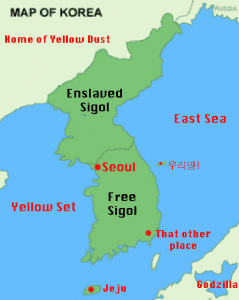 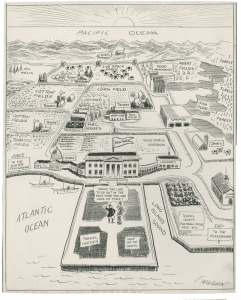 You are in Seoul or you are doomed to the sigol.
The potential argument against staying in Seoul? 불파다 baby, 불파다!

6) DON’T stay only in Seoul. A lot of what makes Seoul great can also make it horrible. Everything is at full speed, full noise, full trend, and there are innocent little poodles with blue and red “highlights” on their hair stuffed into purses. In Seoul people will line up simply because there is a line, and the ‘quality’ of the food, drink, or a show is purely dependent on what Naver says. And the palli? It’s too mother-freaking palli. Trips out of Seoul reveal a totally different Korea: friendly, interested, helpful, funky, and slow paced.
In other words?
After one weekend it’s like watching wet paint dry (while it’s still in the can), rooting for non-US football (excuse me “futbol”), or reading Any Rand – incredibly, stultifyingly boring!

5) DON’T get in a “language exchange” relationship, at least not to learn the Korean language. The language exchange program is to language acquisition as going to a bar in Thailand is to “curling up in a corner and reading this book.” Some things are going to be exchanged, you betcha, but the outcome has more ways to go wrong than you might think.

4) DON’T smoke any illegal substance.
No, really! I feel like I need to use thirty-seven more forms of affirmative grammar and punctuation to get this through the ditch-weed boys out there in Daegu and the sweaty lads and ladettes (but mainly the lads) in the clubs of Hongdae.

3) DON’T eat bunndaegi or heong-oh. Really, this is more of a reverse dare.^^ This is particularly true of Heong-oh, which tastes like urinal cake (don’t ask how I know).

2) DON’T spit in public! You aren’t a 3-kilos under normal body-weight 9th grader trying to look tough, nor are you an old man with terminal lung disease. If you are? God gave you a pass on your behaviour, but the rest of us still don’t.

1) DON’T pay any attention to online “Top-10” lists! At all! Don’t you remember trying to follow that Cosmopolitan “10 Things to Do to Please Your Man in Bed?” or that “Ripped Abs in 2-Weeks: What Doctors Don’t Want you to Know!”

This has been a #TOP10KOREANHOTTAKES