Tips on how to survive your Boryeong Mud Festival Weekend

If you live in South Korea and you’ve been here for longer than a week, have at least one friend or access to a computer, you’ll know that it’s time for the annual Boryeong Mud Festival. If you’re planning on hitting the mud this weekend or next, learn from the mistakes I made in the last few years to make the most of the dirty, disgusting and excellent time that’s coming up. 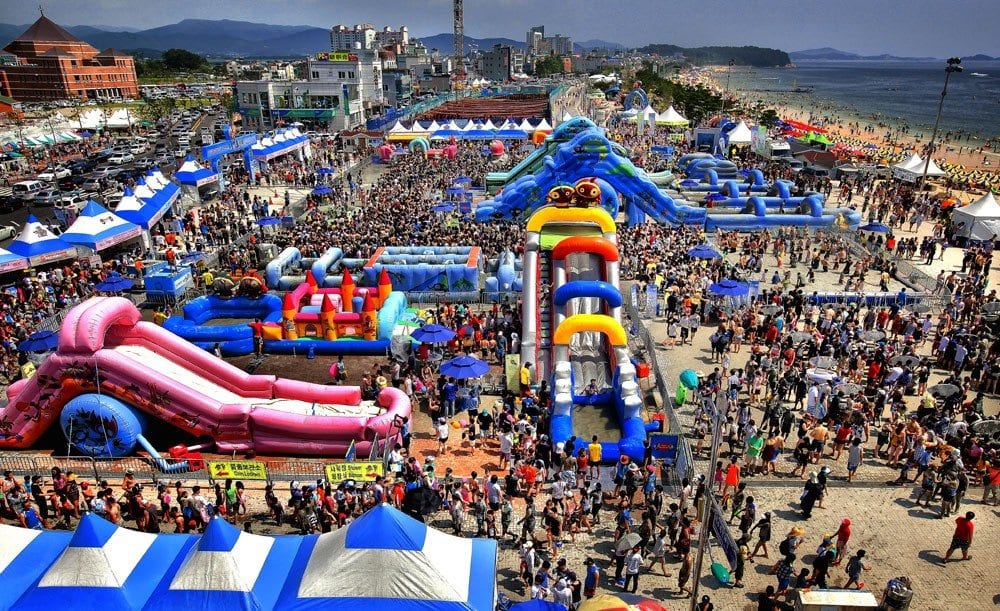 Book your train and bus tickets a little ahead of time.

Depending on how many of your friends are going there together and whether you wish to actually sit next to them or not, about three days to a week beforehand is good. If you enjoy the thrill of leaving everything to the last moment, you’ll always get a ticket on the day – possibly even a seat. Just don’t expect to be sat in the same carriage as your compadres.

Invest in a plastic waterproof bag.

For from 3,000 — 5,000 won, you can keep your belongings sans mud and water. Better still, buy a lovely drink from a cocktail wagon, down it, and then put your stuff inside. It’s a real bargain for thrifty alcoholics like myself.

If you’re not a fan of organized fun and you know enough Korean to say “how much?” then find your own room when you get to Boryeong. To the needy motel owners you’re a walking won just waiting to be taken advantage of. Usually rooms in Daechon go from anywhere between W30,000 – W50,000 so if you pay over W100,000 then you’re a mug. Don’t listen to their crap about it being peak season. It is, but there are still plenty of rooms to go around. Haggle you heart out and expect to pay around double their usual rate. If they’re having none of it walk along to the next motel and don’t settle until you’ve found a price you’re happy with.

Hang out with someone with a camera, or better yet buy a disposable.

Memories may last a lifetime, but only a picture on facebook can show your friends back home how much fun you’re having without them.

Even if you’re rolling around in the mud like a pig in shit, the second you jump into the sea it’s all gone. And if your friends are anything like mine they will be far too pissed to notice that you’re looking like week old kimchi.

The clue is in the name, people! If you’re not prepared to lose it or get it covered in mud, leave it in your room. The whole festival is not that big. You’ll find people; you’ll lose them. When in doubt, you can make new friends.

Don’t stress about booking ahead too much.

The “plan-y planner-sons” of the world will start sending you messages in January telling you to book now! Before its too late! Come March you’re in a blind panic thinking that if you don’t pay now and get those last few tickets you’ll be hitch hiking down and sleeping on the beach. Use your loaf and realise that there’s a reason people are bugging you to book with them: it’s because they’re making a profit. My friend paid W80,000 for her organised trip with a bus leaving at 7 am (no thanks) on the Saturday and returning 7 pm on the Sunday (not with the hangover I plan on achieving) and sharing a room in a pension with 5 other people. I paid W65,000 for return tickets on the train (allowing me to choose when to come and go) and a love motel sharing a bed with a friend of my choice. I even got some free condoms thrown in.

Don’t be a hero. It’s a marathon, not a sprint.

Pace yourself if you want to last the day. Personally, I can’t get out of bed in the morning without a breakfast cocktail, and a journey isn’t complete without some Soju to drink along the way. Just go easy unless you want to be one of those lame idiots that passes out at lunchtime and has to be carried back to their hotel room by their friends. The Mudfest mania goes on all day and night so there’s still plenty of time to pass out covered in sick later.

They are going to get covered in mud, beer, and possibly various other bodily fluids. By the time you’ve been down the mud slide they’ll be ruined, so don’t worry about what to wear. The same goes for doing your hair and make up. Your time can be spent much more valuably. Like in bed.

Don’t forget about the health benefits of the mud.

Boryeong residents believe that their mud is good for the skin, which is apparently why the festival started in the first place. It’s not just about drunk foreigners running around and getting off with each other while covered in mud. Who knew?