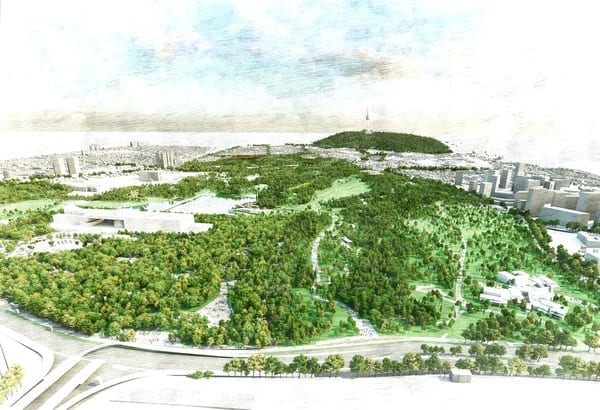 The garrison at Yongsan has occupied the imagination of Seoul residents for years. Referred to often as Yongsan army base, or even just “the base,” the garrison is both a mystery and a constant reminder of foreign military presence on the peninsula over the past one-hundred plus years. It is also prime real estate, occupying 2.5 square kilometers (about 630 acres) right in the middle of Korea’s capital. The transfer of the base from the U.S. Army to the Korean government is ongoing. It is set to become a national park at some point. But even after years of negotiations, revisions and delays, it remains unclear exactly when and how this plot of land, rich in cultural significance, will re-open under the Korean flag.

A much larger Yongsan base opened in 1908 as the headquarters of the Japanese Army of Korea. After the 1953 armistice ended Korean war hostilities, the installation (in U.S. Army parlance outposts are technically posts or installations, not bases) became the headquarters of the United States Forces Korea. In 1992 the U.S. gave 297,000 m2 back to Seoul, on which the city developed Yongsan Family Park and the National Museum of Korea. In 2003, Korea and the United States signed an agreement of relocation, whereby the U.S. agreed to move to a post outside of Seoul.  A 2007 law designated the vacated land as a public park. Then in 2009 the two countries agreed that the U.S. army would complete their move to Pyeongtaek by 2014.

The two governments have repeatedly postponed the Yongsan Relocation Project (YRP), however. The delays have often had to do with the preparations in Pyeongtaek. The Camp Humphries (the new Pyeongtaek army post) construction project was originally slated to be finished by 2008, but has been plagued at times by corruption and shoddy workmanship. In some cases, whole new buildings have had to be torn down and redone. The usual bureaucratic push and pull inherent in an intergovernmental land transfer also continues to play a role in the delay. Time and again, wrangling over details has led to changes in plans. In one highly controversial move in 2014, Park Geun-hye’s government decided to leave the Korea-US Combined Forces Command (CFC) Headquarters in place in Yongsan, a choice Moon Jae-in’s government criticized harshly.

As a result, the U.S.’s Eighth Army (largely synonymous with United States Forces Korea), wasn’t even scheduled to leave Yongsan Garrison until 2017. It finally completed the move to the new Camp Humphries in July of 2017. However a sizeable number of civilians and service people still remain as the United States systematically reduces its presence—the on-base hospital isn’t scheduled to close until December, 2019.

It might be a small miracle that they’ve even gotten this far, considering that the U.S. Army still controls most of the territory. Running a military outpost is inherently secretive, and there is very little data about Yongsan Garrison available to the public. This makes it difficult to make concrete plans with specific dates. Environmental impact studies need to be done, for example. There are serious environmental concerns: a December 2018 inspection by the Seoul municipal government revealed high levels of benzene, as well as residual oil from a large spill in 2001 that polluted ground water in surrounding neighborhoods. Even if 100% of the base is returned to the Korean government by 2020, it could be years before construction is underway as the government assesses the extent of the damage (if any), the cost of cleanup, and risk to the public.

Yongsan Park as a Reflection of the Changing Times

The Special Act to Create Yongsan Park remains in place , allbeit after eleven years of continuations and amendments. The Korean government has an official masterplan for the park, designed by Rotterdam-based architects West 8 Urban Design in collaboration with Korean group IROJE. 10 Magazine spoke with Daniel Oh, an architect on the design project, about the plans for the base. According Oh, the park’s master plan (schematics here) calls for different geological “layers” that reflect Yongsan’s historical record.

Thematically the park is meant to provide environmental, historical, and cultural healing. It conceptualizes intricate water systems, marshlands, and lotus ponds to return the area to its ecological roots. To acknowledge Yongsan’s tumultuous history as occupied land, the design plans for some of the original buildings to be restored; the construction of new buildings acknowledges the need to transform the area into something wholly new. On the cultural third point, the design envisions copious human interaction, with roads and bridges for walking and biking, as well as wide lawns and gardens with concert stages and performance areas.

Oh and Seoul-based architect Coco Cugat also cofounded the online Yongsan Legacy project, which archives the stories of service members and Koreans who worked on the installation. Yongsan Legacy continues to compile a diverse collection of personal narratives, from rock legend Jackie Shin to orphaned Koreans who got their start in business on the base. These stories contribute to a larger account of what life on the base was like. And through them Yongsan Legacy chronicles the more intimate, personal ways the base affected life in Seoul over the decades. Many of these stories are featured at the Yongsan Gallery (discussed below), and the Legacy cofounders hope these kinds of stories will occupy a place in the park when it finally opens. Oh and Cugat see the legacy project, along with Yongsan Park, as a chance preserve the unique ways in which the base influenced the development of Seoul and the lives and culture of those who grew up with it.

The tenor of the Yongsan Park project is also quite different under the current administration. The special agreement to create the park passed in 2007 under a conservative president and legislature that had a much more “top down” approach to governing. But under President Moon, the government has taken a much more inclusive tone, inviting public discourse. Kim Hong-yeol, a representative of the Seoul City Planning Office and General Affairs, told 10 Magazine that the current administration is encouraging active participation from Korean citizens in an effort to dispell images of an unresponsive government.

Kim runs the Yongsan Gallery, a sort of public relations project between the Korean government and USFK, to reintroduce Korea to Yongsan Garrison. Occupying the old USO building (Camp Kim, outside exit 10 at Samgakji Station), it was one of the first areas of the base to be officially returned. In it Korean citizens can freely peruse exhibits that detail some of the history of the base. The Gallery houses displays of old radio equipment, old maps of Yongsan, testimony from some of the first Koreans to work on the base, as well as videos documenting some of the historic moments in the base’s history. According to Kim the traffic is steady and growing, and he estimates that over half of the visitors are Korean. Many of them are Yongsan residents who, despite living outside the walls for generations, had no idea what to expect. “Many come in and say, ‘It’s just an office!’” Kim says. It’s easy to imagine a time, not so long ago, when this sort of public outreach would’ve been inconceivable.

Yongsan and the Vocal Public

How times have changed. It wasn’t long ago that there might have been no public involvement at all. And it’s not just the government’s outreach that has attracted the public’s attention. Since last year over 300 petitions regarding the Yongsan Garrison land have been posted on the President’s official website. These petitions run the gamut of advice, but a large number of them suggest scrapping the park in favor of affordable housing, or some kind of public rental housing. Some suggest 100% public housing, others suggest 60% park plus 40% public housing. It’s difficult to say how representative these petitions are of the broader public’s opinion, but 300-plus on such a narrow issue seems telling.

These petitions clearly spring from of the perpetual worry over housing prices. It’s not so obvious now, but the army base once sat among the fields far outside Seoul’s city limits. After the fighting ceased in 1953 Seoul began growing at lightning speed, quickly engulfing the surrounding regions until Yongsan Garrison found itself in the middle of a bustling city. The base has left a bit of a ‘black hole’ in the middle of the Seoul real estate market. Decades of skyrocketing rents have already displaced thousands, and younger Koreans are worried about the future. A flagship park in the center of the city will undoubtedly fuel another spike in prices, as the surrounding neighborhoods become prime real estate for premium apartments and retail space. What the petitioners have shown though, is a public that wants to participate in the discussion, and offer their own ideas about solutions.

The debate in the public square is bearing at least some fruit. In September of 2018, officials from the Ministry of Land directly addressed the concerns of the petitioners. They argued that because construction wouldn’t be able to start until at least 3~4 years after the USFK vacates the premises, a plan for public housing on Yongsan would do nothing to mitigate the affordable housing crunch now. All told, such a housing project would likely take at least ten years to complete. This is not the answer many Koreans want to hear, but public prodding has at least forced the government to remain responsive to Seoul residents’ concern over the matter.

In some ways this strikes at the heart of the problems that have hampered Yongsan Park plans from the outset: no one can agree on what it should be. In a addition to the public debate, according Daniel Oh there have been many groups and organizations that have tried (and perhaps continue to try) to push their own ideas about what the park should be. Some groups think it should be preserved “as-is,” as a monument to Korea’s turbulent 20th century history. Others think it should be completely torn down, while still other groups contend that it should be an ecological park. The master plan is of course in place, but Oh acknowledges that the fate of the park’s design is technically still up in the air. The current government could decide tomorrow to start over.

This is to say that we just don’t know exactly what will happen to Yongsan Garrison, or when it will happen. Although most U.S. army personnel have moved to Pyeongtaek, major administrative hurdles to closing the Yongsan facilities remain. Current time estimates range from an optimistic 2020 to a less optimistic 2024. The Korean government’s timetable for park completion is even less optimistic. The sheer number of legislative and legal steps puts a conservative estimate at ten years. And the 2018 legislation on the design master plan still has to go through a public comments period, followed by a host of administrative processes.

So for the time being Yongsan Garrison remains a mystery. All we really know for certain is that it will indeed be a park, eventually. For now, the public can only to continue to wonder: What exactly will Yongsan Park look like? Oh said he hopes that it will be a “mirror,” in which Koreans will see whatever meaning they need to see. It’s an ambiguous explanation for an ambiguous space, that continues to occupy an ambiguous place in the minds of Koreans and expats alike.