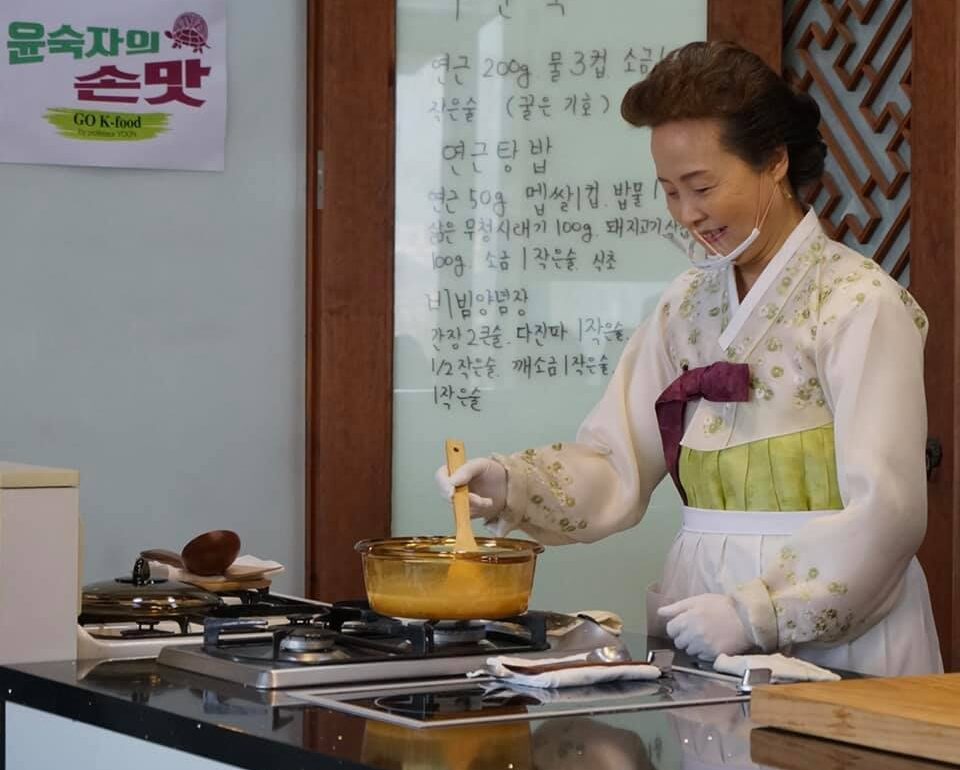 The Ambassador of Korean Food

In the heart of Insadong, the forefront of all things traditional is the Institute of Korean Traditional Food building. From the tteok café and tteok museum on the first floor to the culinary school to the crocks full of handmade gochujang, doenjang, soy sauce, and more on the rooftop; it is a building completely dedicated to traditional food. At its helm is Yoon Sook-ja, director, chef, instructor, and widely acknowledged ambassador of Korean food. She resides as the queen of her domain, elegantly dressed in traditional hanbok.

Born into a large clan, she grew up with year-round events, ceremonies, guests, and the food to accompany them. Helping her mother watch over the unending preparations is where Yoon Sook-ja first became interested in the food we eat and why. Even now, when asked, she answers that her mother was her inspiration and mentor. She went on to research Korean traditional foods and royal Korean cuisine for 30 years.

She became well-known as the best Korean chef and the one others turned to for historical state dinners, most notably Ban Ki-mun’s inauguration banquet. One of her favorite anecdotes is the tale of when she was in charge of South Korea’s corresponding banquet for the 2007 North-South Korean summit. The North sent over 50 people to help her. Though many were spies sent to secretly monitor her and the South Korean staff, there were also quite a few admirers, one of whom sidled up to her to discreetly whisper to “the teacher” that he owned a copy of her cookbook.

Yoon Sook-ja didn’t set out to become a celebrity and champion of Korean food from the start. First working as a professor in food and nutrition at Sookmyung Women’s University, she quickly found the Korean food industry to be severely lacking in standard systems.

To rectify this, she founded the Institute of Korean Traditional Food and traveled abroad to different countries as an instructor. She says her end goal is to make her culinary school the place to learn Korean cuisine for local and international students. That goal may not be too far in the future. Recently, Sam Kass, White House Chef and Food Initiative Coordinator for the Obamas came to learn how to make bulgogi and samgyetang from Yoon. The director smiled with pride and pleasure while she recounted how Kass seemed impressed by the facilities and how eager he was to learn and then recreate the dishes for the Obamas.

Well-known for her cooking philosophy, yakseon (therapeutic cuisine), Yoon Sook-ja believes eating equals caring for the body. A similar yet different Western philosophy might be “You are what you eat.” Basing her recipes on traditional Eastern medicine, Yoon incorporates only all-natural seasonal ingredients to create dishes not only good for the body but pleasurable to the eyes, nose, and tongue. No food coloring is used to bring out the vibrant pinks, greens, yellows, and reds in her desserts.

When we asked what three Korean foods she would recommend to foreigners, we expected her to say something quite unique such as samhap (a pork, kimchi, and fermented skate dish) or some royal Korean cuisine; however, Yoon firmly said, “Samgyetang, bulgogi, and bibimbap.” When asked why, she replied, “Most of the time, whenever I go abroad to teach Korean cuisine, I have to modify the recipe to fit the tastes of the nationals there. [….] The taste profiles of these three dishes are easily accessible to foreigners not yet comfortable with Korean food.”

[author] [author_image timthumb=’on’]https://10mag.com/wp-content/uploads/2014/08/Sharon-Heit_avatar_1409017173-96×96.jpg[/author_image] [author_info]Sharon Heit is a regular collaborator for whattarollmag.com and photo contributor for Land of Gazillion Adoptees. View her digital and film portfolio at sharonheit.com and instagram.com/ladyfaceshai.[/author_info] [/author]