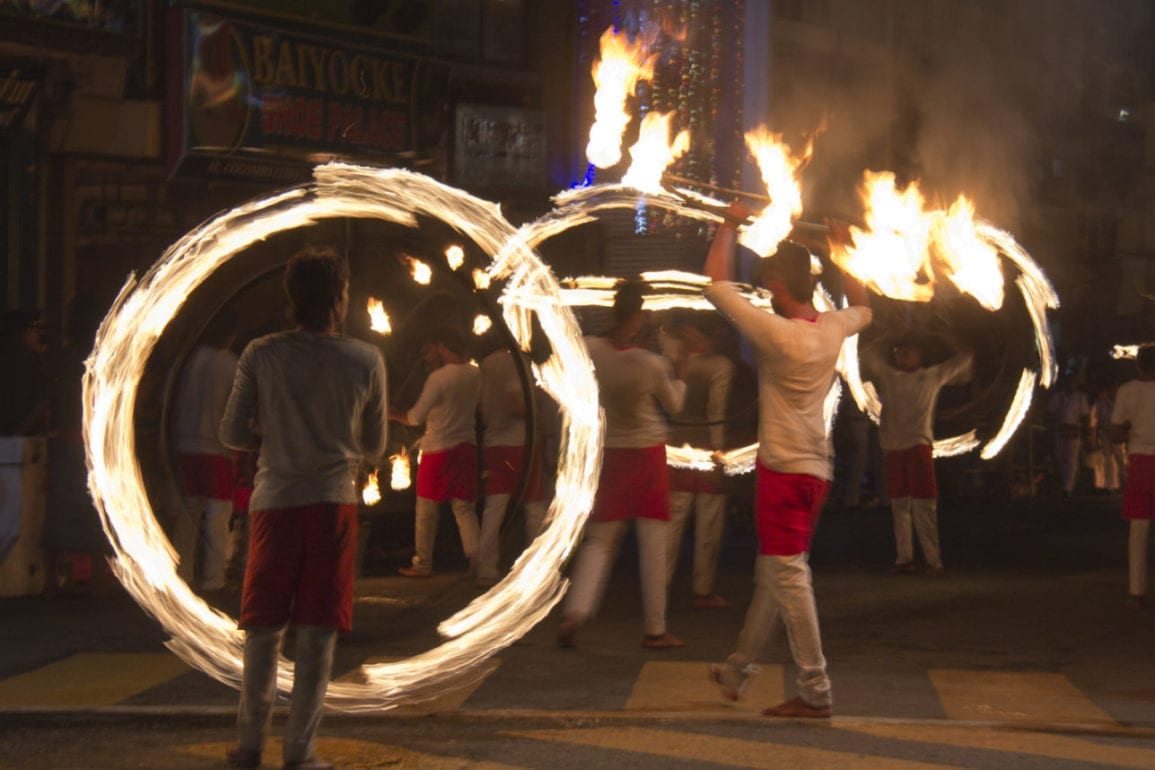 Parades of fire-twirlers, sword jugglers, whip crackers, and 50 illuminated elephants. It might sound like something fictional, straight out of Aladdin, but for ten days a year in the Sri Lankan mountain town of Kandy, such a procession is far from fiction.

Every July or August (depending on the full moon), the Kandy Esala Perahera takes place to commemorate the first of Buddha’s post-Enlightenment teachings and to put the spotlight on one of Sri Lanka’s greatest relics: a sacred tooth, believed to be from the Buddha himself. “Perahera” literally means “parade,” which is just what happens for ten consecutive nights during the event. For several hours, the sacred procession weaves through the city’s streets starting from the Temple of the Sacred Tooth – a stunning complex where the parade’s dozens of elephants camp during the day. 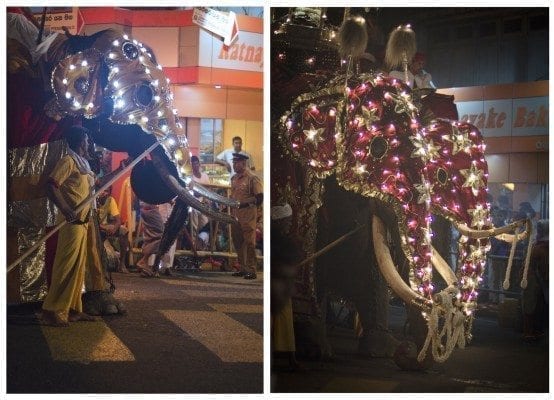 A cannon sounds off to start the festivities each night, and everything that comes afterward is a smorgasbord for the eyes and ears. Whip-crackers come first, with long and deafening cords (that shockingly injure no one surrounding them), and soon after, fire twirlers of both the adult and adorable child variety spin through the streets. The elephants, covered in deep red and yellow robes and strings of lights, are paced throughout the parade procession amid plate twirlers, drummers, musicians, tangles of dancers, and religious officials.

The Perahera procession actually encompasses five small parades in succession: one for the Temple of the Sacred Tooth and four more for the devales (or godly shrines) of Kandy. Processions are included for the figures of Natha, Vishnu, Kataragama (the god of war), and Pattini (the chastity goddess).  In the Sacred Tooth portion of the parade, the procession’s most important segment, the “Maligawa Tusker,” carries the sacred tooth in a small casket (or a replica version), covered with robes, a canopy, and glowing lights and followed by lines of dancers. Tourists probably wouldn’t notice this part as being any more lavish or over-stimulating than the rest if not for the surrounding locals who have camped out just to be as close as possible to this sacred bit of the Buddha. 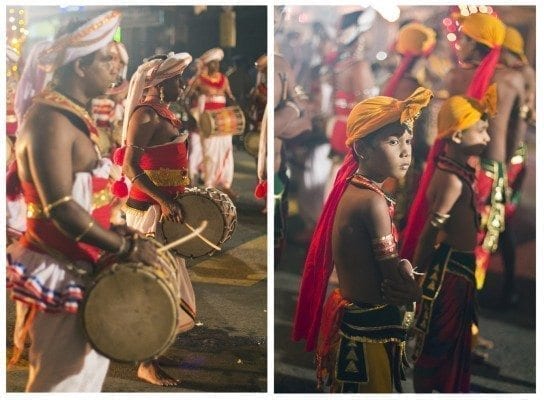 As a whole, the Kandy Esala Perahera includes more than just the famed Sri Lankan elephant parade, with a ritual tree-planting ceremony held just before the 10 days of processions and a “water cutting” ceremony just after. But the most tourist-worthy parts are definitely the processions themselves. Of these, the first five nights, called the Kumbal Perahera, are more toned-down, while the latter five days, called the Randoli Perahera, are the most rambunctious and jam-packed.  It’s worth noting that a smaller daytime parade also takes place after the tenth day of nighttime processions, but, while perhaps better for photos, it lacks the splendor of the fire-filled nightly processions.

As a traveler, the key to enjoying the Perahera is to secure a suitable spot both to sit and to sleep, as the town is overcrowded with tourists and local spectators during the event. Guesthouses and hotels in the main area may double or triple their prices or simply be unavailable if not pre-booked far enough ahead of time, so smaller accommodation in the surrounding hillsides (though a bit inconvenient by location) may be your best bet.

As for sitting somewhere during the parade itself, you’re bound to hear the full spectrum of opinions from every shop owner, hotel worker, and former traveler.  You may be able to secure a free sitting spot on the street if you go considerably early and focus on the latter parts of the parade route, though the performers are sure to be getting tired by them. In the main areas of the procession, locals will have been camped out overnight or since the morning in the blistering sun, so chances of snagging some sidewalk are low. Meanwhile, seats in storefronts and on precarious upper-level awnings and balconies are available everywhere, from KFC to mom-and-pop clothing stores, but be prepared to pay anything from 40 to 100 dollars (haggling is highly recommended). Backpackers in particular may balk at these fees, but on these rare occasions, you really do get what you pay for. If you’re a photog or really want to be closest to the action, a protip could even be to buy the storefront seat and then trade it with an uncomfortable local camped out in front of you in the free seats on the sidewalk. 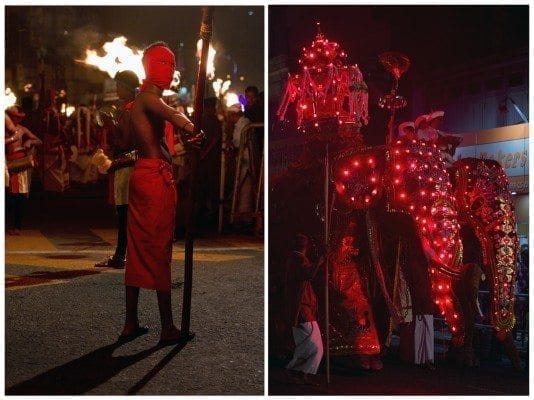 In any case, if you go, be prepared – the procession is long, and comfort quickly becomes an issue in any of the available cramped seating situations. Bathroom breaks are unlikely and liquids are scarce in many spots.  There is also the very real possibility that the elephants (unchained and traveling quite close to the spectators) will become agitated and cause a dangerous situation, though the danger is more likely to come from stampeding crowds. All this said, any spectator is sure to be starry-eyed enough to forget their discomfort for much of the event.

Overall, the Kandy Esala Perahera is a wondrous spectacle that needs to be witnessed to truly be understood.  The event is still somewhat underrated in terms of tourist draw, but is becoming more popular–and expensive–with each passing year. The bottom line? Put this pachyderm parade on your itinerary as soon as possible.