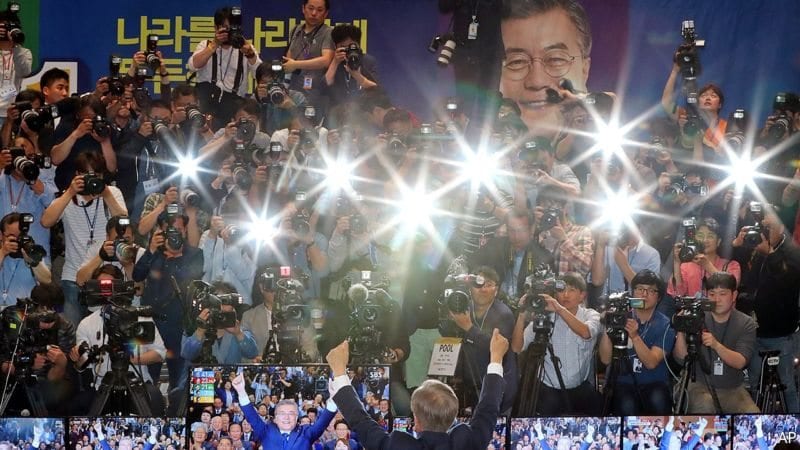 After a period of much turbulence, the people of South Korea have elected a new leader, and his name is Moon Jae-in. The new liberal Korean president won 41 percent of the vote, thus marking an end to almost a decade of conservative power. President Moon faces a wide array of challenges, both foreign and domestic, but has vowed to bring a deeply needed change in the way the nation is run.

Moon’s victory comes at a tense time in Korean politics as the former president Park Guen-hye has just been impeached because of a corruption scandal. Park is currently behind bars and standing trial on eighteen charges. An important message that Moon tried to convey to the public during his campaign was that he would unite the nation once again and lead it into the right direction. His message seems to have resonated with voters seeing as he beat his opponents with a comfortable margin. Despite the tense political climate, total voter turnout was 77 percent, the highest in a presidential election since 1997.

Moon’s two main opponents, Hong Joon-pyo of the Liberty Korea Party (formerly the Saenuri Party) and Ahn Cheol-soo of the People’s Party, gathered 25 percent and 21 percent of the vote, respectively. Hong, the conservative candidate, did well in traditional conservative strongholds and managed to perform better than many thought he would. He conceded the election only after 9 percent of the ballots were counted. He said that he accepted the election outcome and that he will work hard to reform his party, which has been in chaos ever since the corruption scandal broke out and the former president was ousted from office. Ahn Cheol-soo also accepted defeat minutes before it was projected that Moon would win the elections. Ahn vowed to continue striving for Korea’s change in the future.

Moon Jae-in himself claimed victory quite early and made an appearance at Gwanghwamun Square at around 23:45 PM on Tuesday. The location was seen as symbolic since it was the same place where hundreds of thousands of Korean people had been peacefully protesting over the past few months to have their former president impeached. Moon was greeted by huge crowds and gave a brief speech in which he thanked all of his supporters for helping him succeed in the election. He expressed his desire to run a just country and to make South Korea a nation to be proud of. The mayors of Seoul, Goyang, and Seongnam together with the chair of the Democratic Party of Korea were also there and all congratulated him for his great victory.

The fact that the Korean people chose a liberal to lead their country marks a strong change in the political consensus that has governed the country for almost a decade. However, even though president Moon may have a broad base of support among his citizens, this does not mean his job will be made any easier. The new government is currently facing a plethora of issues, all of which need immediate attention in order to prevent a further escalation of tensions for the country. Perhaps the biggest issue facing the country is that of its northern neighbor. Moon has expressed his willingness to seek dialogue with Pyongyang and to change the aggressive policies of the past two administrations.

Moon has argued that Washington’s reliance on sanctions and pressure has been ineffective and that it is time to attempt engagement and dialogue with the North. He also suggested that South Korea must “embrace the North Korean people to achieve peaceful reunification one day.” “To do that, we must recognize Kim Jong-un as their ruler and as our dialogue partner,” he said. “The goal of sanctions must be to bring North Korea back to the negotiating table.” His views on dealing with the North can be compared to the sunshine policies undertaken by the two liberal presidents who held power from 1998 to 2008. These policies included diplomatic talks, family reunions, and joint economic projects.

A return to such policies would undoubtedly put a strain on U.S-South Korean relations since president Trump is currently pursuing an opposite strategy. Trump seeks to pressure the North as much as possible in an attempt to intimidate the Kim regime and force them to give up their nuclear weapons ambitions. However, these strategies have not been working as Kim Jong-un has openly stated his disregard for sanctions and it is widely believed that the North is planning its sixth nuclear test. The latest move by the U.S has been the deployment of the missile defense system, known as Terminal High Altitude Area Defense, or THAAD. Moon voiced his disapproval of the deployment of the system during his campaign and has said he would review the situation as president.

One global power who would welcome a more liberal stance on North Korea, especially the removal of the Thaad system, is China. China claims that the missile system can be used to spy on its territory and, as a consequence, they have implemented a widespread boycott of Korean products and on tourism from China to its eastern neighbor. This boycott has deeply hurt sales of Korean brands in China and tourism from China plummeted 40 percent in March. Moon also vowed to strengthen the Korean economy and removing the Thaad missile would surely help many Korean businesses recover from high losses. Whatever his choice will be, Moon must walk a fine line between keeping China content while at the same time preserving a strong relationship with the United States.

To better understand his policy positions, especially those towards North Korea, one must look at Moon Jae-in’s history. Moon is the eldest son of North Korean refugees but was himself born in Geoje, South Korea. He studied law at university but was expelled after organizing a protest against Park Chung-Hee’s rule. He was sent to jail and later conscripted to the army. Six years later, he opened a law firm dealing with human rights issues together with his friend Roh Moo-hyun. Roh was elected president in 2002, thanks in part to Moon’s efforts as his campaign manager. Moon later became Roh’s chief of staff. Moon ran for president in the 2012 elections but narrowly lost to Park Guen-hye and spent the next four years as the leader of the opposition.

In part because of his background, Moon has developed a particular view on the issues relating to North Korea. He said: ”My father fled from the North, hating communism. I myself hate the communist North Korean system. That doesn’t mean I should let the people in the North suffer under an oppressive regime.” He also wants to allow South Korean firms access to cheap North Korean labor, and renew cultural exchanges across the demilitarized zone.

Besides personal feelings, he also has professional experience in this area. As chief of staff to Roh, Moon helped set up the South Korean President’s historic summit with Kim Jong Il in 2007, and the six-party denuclearization talks between North and South Korea, the U.S., China, Russia, and Japan from 2003 to 2009. It remains to be seen whether the new Korean president will implement a new version of the sunshine policy, which is already being referred to as the moonshine policy.

After a general election, the president-elect usually has sixty days to form a transition committee. However, because this was a snap election, Moon will not be given any time at all. The acting president Hwang Kyo-ahn said last week he was ready to step down as soon as the election results came out. Moon decided to skip a lavish inauguration ceremony and start work straight away. During his inauguration speech, president Moon shared his plans to live in a government complex in Gwanghwamun instead of the Cheong Wa Dae, the Blue House where presidents usually live. He explained his decision by saying that he wanted to be closer and more accessible to the people.

Moon also expressed his willingness to go to Beijing and Tokyo, and that if the circumstances are right, he would also consider visiting Pyongyang. The new president ended his speech by conveying his desire to bring an end to the negative political dynamics that have plagued the country over the past months. He vowed to be a clean president and said he was stepping on as president with empty hands and would leave the presidency with empty hands. 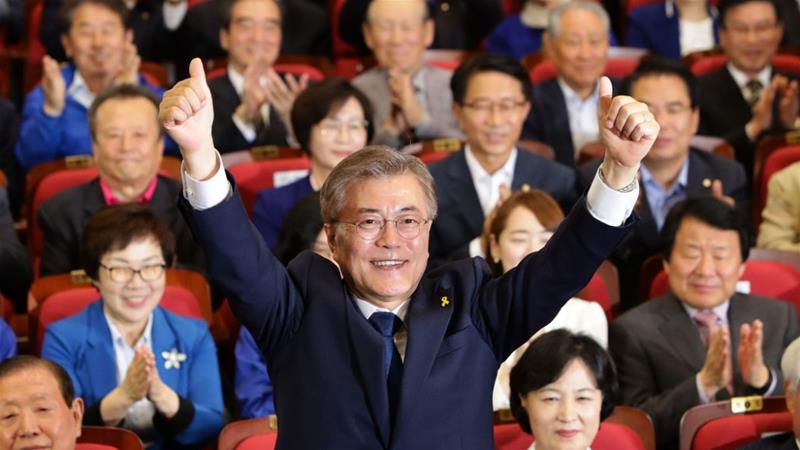 Later on Wednesday, the new president held a press conference in which he appointed Lee Nak-yon as prime minister, Suh Hoon as director of the National Intelligence Service (NIS), and Lim Jong-seok as his chief of staff. Moon’s pick for NIS director may be his most strategic choice. Mr. Suh spent his career monitoring North Korea and played an important role in the negotiations that resulted in the two summit meetings of 2002 and 2007. On Wednesday, Suh said that another inter-Korean summit meeting was “necessary”, but that it still is not the right time to discuss this.

Shortly after his inauguration, President Moon Jae-in had a conversation with president Trump on the phone in which they vowed to keep both countries cooperating on the issue of North Korea’s nuclear program. President Trump expressed “respect” at the choice the South Korean people made by electing Moon and said that he believed the North Korean issue could be resolved, despite its complexities. President Trump also invited the new South Korean leader for a summit in Washington and for a joint celebration of their becoming president. President Moon responded by saying he would send a delegation as soon as possible to discuss the summit.

Chinese president Xi Jinping also congratulated Moon and said that he would like to work with South Korea and that he hopes to solve the Thaad issue. Japan’s prime minister Abe said in a statement that South Korea is Japan’s most important neighbor and that he is looking forward to work with the new leadership and wants to meet with president Moon soon.

The newly elected nineteenth president of South Korea will undoubtedly face many challenges ahead, but this does not mean he will fail the Korean people. The citizens of South Korea have shown that they are tired of politicians taking advantage of their power and serving their own interests instead of those of the people, who elected them. A new, strong sense of political awareness has taken root in South Korea and Moon Jae-in now has the opportunity to lead this new movement. Whether it be through a moonshine policy or another form of governing, he now has the responsibility to carry out the wishes of the people and to protect and promote the country he now leads.