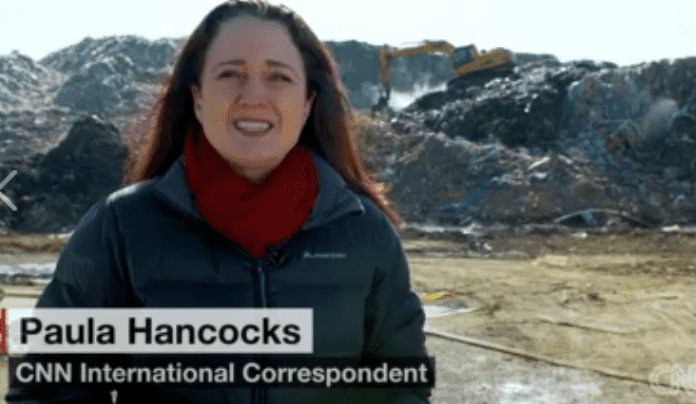 What would you do if a foreign news outlet writes an article about a smoldering, hazardous mountain of trash in your country? Would you:

As incredulous as it may seem, answer D is exactly what happened when CNN Producer Jake Kwon wrote an article titled “South Korea’s plastic problem is a literal trash fire.” In this article, he describes the huge mountain of trash located near Uiseong, Gyeongsangbuk-do, which emits toxic smoke daily, as fires erupt due to the trash decomposing. Whereas Kwon is mainly trying to shine a spotlight onto Korea’s trash problems, many Koreans have taken this article as an attack, and are not responding kindly to the fact that an American outlet is reporting on a Korean problem.

The huge mountain of trash near Uiseong, which is originally a farming county, is a whopping 170,000 tons. It consists of household waste, such as diapers and plastic wraps, and construction materials. Although the site is only allowed to store around 2,000 tons of local garbage, the pile has grown massive through illegal dumping of trash from all over Korea. The problem has been created through waste mismanagement of one single man, who has probably dumped more waste on this plot of land to avoid taxes and make more money. As the pile has been around for quite some time, it has started to decompose, leading to spontaneous combustion of the trash mountain due to the toxic gasses released. Putting out the fires is pointless, a new one will always arise.

The Uiseong trash mountain, the largest in South Korea, is part of a much larger problem the country is having with its trash. According to Euromap 2015 data, South Koreans are the world’s 3 biggest plastic consumers, after Belgium and Taiwan, among 63 countries with plastic manufacturing facilities. Korea is tracked at almost 132 kilograms per capita per year in 2015, and the total consumption is expected to increase from 6.71 million tons in 2015 to 7.54 million tons in 2020.

Although the Korean government is strict about household recycling, it cannot deal with the trash anymore. Due to heavy smog in 2017, the Korean government started shipping trash out to other countries, instead of incinerating it within Korea. China used to be the main recipient, but due to tightened regulations, Korea started to export its trash to the Philippines, both legally and illegally. However, the trash South Korea exported to the Philippines was not recyclable, and they had to take a portion of the trash back.

One of the reasons South Korea cannot get rid of its trash is that the price to incinerate the trash has shot up from $53 per ton to $230. A lot of the trash gets shipped away illegally or dumped onto trash mountains like the one in Uiseong. The government is aware of the problem and has promised Uiseong residents to clear 21,000 tons of trash from the pile this year. That still leaves a trash mountain of 149,000 tons, which the Uiseong residents have to learn to live with.

Although this news might be new to foreign readers, it was already reported in December 2018 by the Cheonji Ilbo, a local newspaper, and later picked up by Yonhap and JTBC. However, because a foreign news outlet revealed internationally the problem, Korean netizens massively reacted, and they weren’t exactly positive.

One of the most common reactions to this article is that of “무슨 일?” “What’s on?” Although some people do seem embarrassed about the problem, most comments online point a finger to America. Forum posts defending Korea (with outdated statistics) have fields of comments such as “but America doesn’t even separate their garbage!” and “The US produces way more garbage than Korea!” (According to Euromap, the US consumes 93 kilograms of plastic per capita per year vs 132 kilograms in Korea.)

I lived in America, and they don’t recycle at all ….? -_- They just throw everything together in the trash can.

It’s the same everywhere. The US cares less than us about recycling (sorting trash). Homeless people search for plastic and cans so they can return them for money.

They would be shocked if they saw our recycling rate.

However, some comments are a bit more reflective on the over-reaction of being exposed.

If we say that CNN doesn’t have the rights to report about Korea’s contamination problem because the US has more pollution problems, that would mean that Korea shouldn’t report anything about better countries than Korea? Such a weird logic;

10 Magazine contacted Jake Kwon, the writer of the CNN article, regarding these comments. His response: “The [Korean] public is unhappy that an American publication seems to wag its finger at Korea’s waste problem while the US itself is one of the largest producers of waste in the world. Though understandable, it’s not constructive.” Rather than accepting the facts and acknowledging that Korea has a waste problem, many angry netizens seem to turn this article upside down and use it to call CNN, and the US, hypocrites.

The Korean government is trying hard to solve the trash problem. The Ministry of Health and Environment has stated that it will enforce proper disposal of trash more strictly and that it will work on diminishing the existing trash piles. However, there is not a lot of budget and manpower. Furthermore, there is no clear vision of how the government will reduce the illegal trash piles. It cannot use more incinerators, as that will worsen the already horrific levels of fine dust. Shipping trash internationally is also not a viable option anymore.

The government and Korean citizens should start thinking in terms of long term solutions. Waste problems like this can be partly prevented through stricter regulations on plastic. Plastic bottles, food packaging (who wraps cookies individually anyways?), delivery food dishes, umbrella sleeves and other forms of single-use plastic should be phased out. The Korean government is already committed to that, but they cannot start soon enough. It launched an initiative last year, to prohibit the use of disposable cups inside cafes. However, many people are unhappy with this new rule, and it is not widely followed for the sake of “convenience.” The Korean consumers should also start realizing the impact their buying habits have on the environment.

If only all those angry online Korean commentators would direct their energy into becoming eco-friendly consumers, then maybe this problem would not have gotten this big in the first place.