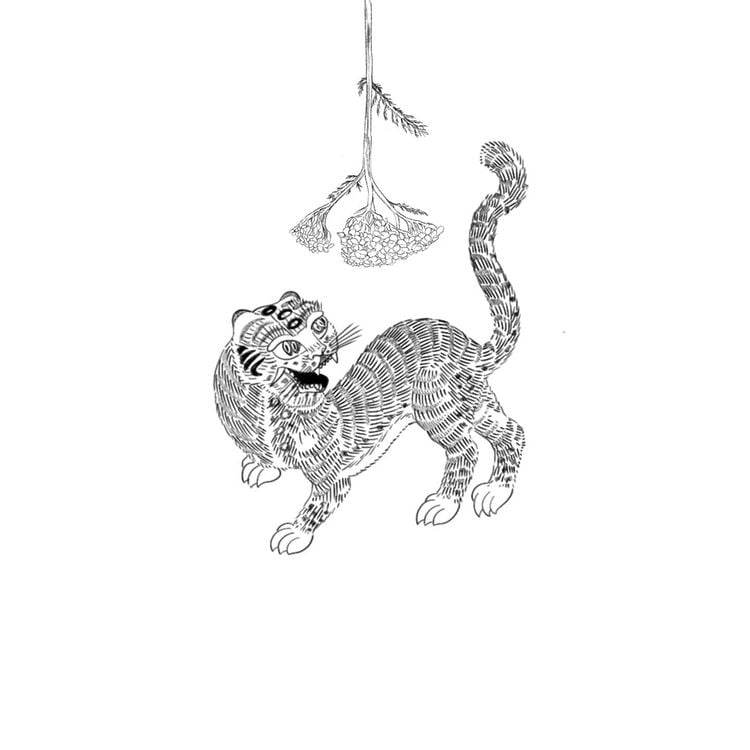 Life at the Western gold mines in northern Korea was dangerous both inside and out in the 19th and early 20th centuries. These Korean mines were generally located in sparsely populated mountainous regions and were the favored haunts of Korea’s big cats – Siberian tigers and leopards.

Tiger and, to a lesser degree, leopard attacks were so common in Korea that in 1889, an American newspaper reported:

“So many persons annually disappear in Corea from the ravages of tigers that hopeless debtors and defaulters take advantage of the presumption thus created in case of a mission person to leave their torn garments at the border of some wood and privately decamp. ‘Caught by a tiger’ has come to be equivalent to in Corea to our American phrase ‘escaped to Canada.’”

There are many anecdotes of western miners encountering these feline predators. Justine Tweed, who was born at the French gold mining concession near the Yalu River in the 1930s, recalls that her own father, Guy B. Boydell, nearly met his end this way. It was in 1914, on an intensely cold night, that Boydell was trudging through the deep snow on his way to his quarters when he suddenly felt that he was no longer alone.

“He half expected to feel the tap of a [worker’s] hand upon his shoulder, soliciting monetary help, perhaps for an ailing wife, or sick child, but then the slow but strong sound of breathing warned him not of  human interception, but of something far more sinister. He quickened his step, at the same time swinging his lantern behind him. He dared not run. At last, [he reached] the final bend in the path and there ahead a shaft of light from the mess hall [beckoned him] like a welcome beacon.”

Boydell quickly made his way to the building and the following morning organized a search party. They discovered the large Siberian tiger sunning itself on a large rock. With a single shot, Boydell killed the tiger. As evidenced by the photograph, the tiger was transported back to the camp on a sled – the corpse frozen in a standing position.

Boydell was fortunate enough to have reached the sanctuary before the tiger could attack but many miners were not. In the same region, a few years earlier, the “fresh-picked bones of three Korean wayfarers” – victims of a tiger attack – were discovered by Japanese guards at the mine. They had reported seeing five tigers stalking the area.

In the 1930s, John Blain, the son of a gold miner at the American gold mines at Unsan, recalled that searches were made “on several occasions when word came back that one of the miners going home after work form the mine had not shown up.”

“They [the searchers] would go looking for him and they would just find a spot on the trail where there had been a scuffle and I can remember on one occasion when all they found was a hand. In these cases they having [sic] been attacked by tigers. More than likely ones that gotten old and were not able to catch game so the best game they could find was some man that was walking home at night…”

Perhaps one of the best hunters at the gold mines was American Frank A. Smith. Smith claimed to have killed more than 25 tigers and served as a guide for Kermit Roosevelt (President Theodore Roosevelt’s son) during his hunting expedition in Korea during the 1920s.

Hunted extensively, the tigers had disappeared from most of Korea by the mid-1930s. Although rumors persist that tigers still haunt the DMZ or the slopes of Mount Paekdu, it is more than likely that the only tigers remaining in Korea today are those found in zoos or in the hearts and memories of the elderly.

History: One Man’s Trash Is Another Man’s Treasure

History: The Crookedest Railroad in Korea

History: Boys Will Be Boys