What Happens After The Impeachment Of The South Korean President 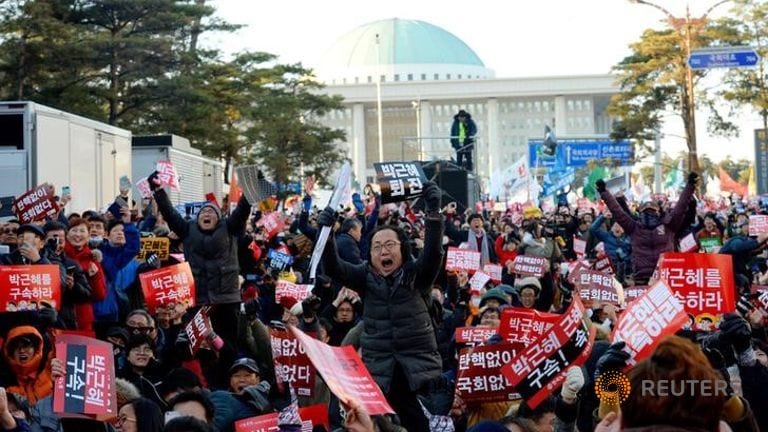 Park Geun-hye has been impeached by South Korean lawmakers, but the dramatic narrative is far from over.

Although the 300-seat National Assembly has voted to oust Park Geun-hye (with a majority vote of 234 to 56), it is up to the Constitutional Court whether the motion is approved. The next 180 days (the time provided for them to finalize the decision) ought to be interesting.

Following recent events, Korean lawmakers (including those who belong to Park’s party) faced heavy pressure to vote for the President’s impeachment.

In fact, many of the Saenuri lawmakers did favor the impeachment of Park Geun-hye, previously called “The Queen of Elections” after having pulled many wins for Saenuri in the past.

However, despite the majority vote in the National Assembly, the impeachment is yet to be finalized. For the impeachment to follow through, the majority of the Supreme Court (six out of nine Justices) must uphold the vote, with the head of the parliamentary judiciary committee acting as the lead prosecutor. After which, a presidential election will be held within 60 days.

This is the second time that an impeachment process has carried out this far in South Korea—the first time, the said impeached president was reinstated. In 2004, lawmakers accused late liberal President Roh Moo-hyun of minor election law violations and incompetence. After being forced out of office for two months, the Constitutional Court ruled that his offenses weren’t serious enough to justify the impeachment.

This time, analysts say that there are low chances for the vote to be overturned. The scandal that Park Geun-hye and confidante Choi Soon-sil are involved in has yet to be fully investigated.

The president of South Korea has immunity from an investigation—thus President Park has yet to be fully investigated in the scandal. Choi, however, is already in custody and facing allegations of fraud. The latter was set to attend a public hearing last Wednesday but cited a panic disorder as an excuse not to be prosecuted.

The Constitutional Court may take a couple of months, however, to finalize their decision.

Many South Korean citizens were seen celebrating after the announcement of the impeachment, but perhaps the most noteworthy people at the celebration were the relatives of the victims of the 2014 Sewol ferry disaster.

Many blame the said tragic incident, which resulted in the death of more than 300 people, on government incompetence and corruption. Park Geun-hye was missing at the time of the incident for 7 hours, and various theories about her then-whereabouts have risen in recent events.

Aside from the Sewol tragedy, Park’s time in office is marked with various controversies, such as the rising unemployment rate amongst the youth, the bankruptcy of major companies, and the lack of progress in relations with North Korea.

Hwang Kyo-ahn, the Prime Minister of South Korea and now the acting President, is scheduled to address the nation at 8 p.m. Friday. After Park Geun-hye’s impeachment, Hwang immediately heightened military security against North Korea, in case the North decides to take advantage of this time of political turmoil.

Some analysts predict that protests will continue and that Park’s opposing party, Minjoo Party, will continue to urge Park Geun-hye to resign instead of waiting for the Constitutional Court to finalize its decision during the 180-day wait. The Minjoo party may also attempt to find and position an alternative leader to Hwang Kyo-ahn in the meantime.

The people have spoken and the government has been forced to listen. The events that have occurred thus far reveal that the people still seem to have power in a nation that often leaves its people powerless. The events to come will show perhaps once and for all who truly rules South Korea—the people or the establishment.