“Hong Kong presents perhaps one of the oddest jumbles in the whole world.
It is neither fish, flesh, fowl, nor good red herring.  The government and principal people are English, the population are Chinese, the police are Indian, the language is bastard English mixed with Cantonese, the currency is the Mexican dollar, and the element no more amalgamate than the oil and vinegar in a salad.”
Algernon Bertram Freeman-Mitford, 1st Baron Redesdale (1837-1916)

Proper paradise
Technically, it’s a “special administrative region”—a sterile classification that belies its true character. Yet any attempt to characterize Hong Kong in a word or two lands you in another quandary: Hong Kong cannot be captured in a few short words or pictures. The best way to begin understanding Hong Kong is to explore it first hand with two feet on the ground—or a ferry, hiking trail, escalator, subway, tram, minibus, or cable car. It’s more than just the world’s most spectacular skyline, action-cinema epicenter, global financial hub, or convenient stopover en route to other exotic Asian destinations. It’s a place where land meets sea, city meets countryside, and tradition meets modernity. It’s an East-West cultural cacophony whose hard-fought harmonies are arranged into a symphony that is distinctly Hong Kong.

A brief overview of 香港: “The Fragrant Harbor”
Situated on the southeastern tip of China’s Pearl River Delta on the shores of the South China Sea, Hong Kong is a historic crossroads of culture, commerce, and conflict. Colonial powers Portugal and England dueled with Chinese rulers over trading rights in this lucrative gateway to Asian markets. The Opium Wars of the 19th century rendered Hong Kong a British Crown Colony.  The name “Hong Kong,” which may refer to the fragrant scent given off by incense factories along the Kowloon Coast, came into use at this time.
Britain extended the original territory from Hong Kong Island in 1841 northwards to Kowloon Peninsula in 1860 and finally to the New Territories in 1898. The terms of the 99-year lease over the New Territories required Britain to cede control over Hong Kong to China in 1997. Over 95% of its 7,000,000 residents claim Chinese heritage, but the British imprint lingers on in this “one country, two systems” society. Besides having to drive on the left, its highly autonomous government, thriving capitalist economy and free speech distinguish Hong Kong from her mainland counterparts.

First things first
When you book make sure your trip includes staying overnight on a Wednesday (more on that later). Avoid extreme heat and humidity by visiting Hong Kong in the fall or winter. Packing should be dictated by recreational preferences, whether you hope to hike nature trails, go biking, bum around on the beach, see the sites, or go for a trendy urban outing.
Assuming you arrive via Hong Kong International Airport (HKG), find the Airport Express to take you to Central Station in the heart of Hong Kong. Purchasing a rechargeable Octopus Card ($50 HKD refundable deposit) at the customer service counter is highly recommended as it is accepted on all forms of transportation in the city, as well as at convenience marts, vending machines, and entertainment venues around town.
Central Station is the hub of a highly efficient transportation system from which no destination is much more than an hour’s ride away on one or more forms of transportation. Keep this in mind when choosing your lodging. Any style can be matched, from couch surfing to tea-and-crumpet-nibbling at one of Hong Kong’s many upscale options like the Landmark Mandarin Oriental or The Peninsula.

Five humble suggestions for how to spend your time
1. Skyline Hong Kong’s jaw-dropping skyline is undoubtedly its pièce de résistance. Indulge your inner tourist and make the Peak Tram your first stop straight out of the gates of Central Station. At 400 feet above sea level, Victoria Peak allows a 360-degree bird’s eye view of Hong Kong’s scenic diversity. Soak up skyline views with a backdrop of Victoria Harbor, sprawling Kowloon, and the rolling hills of the New Territories. You’ll find the best views by leaving the station and heading west to Lugard Road. Following the path, more green hillsides greet your eyes as you look over Hong Kong’s islands scattered across the South China Sea. Other incredible skyline views can be taken in day or night, notably from the Star Ferry or Kowloon’s waterfront viewing platform during the nightly laser show.
2. Shopping & Markets Visiting Hong Kong demands a stroll through some of its markets. Luxury brands and boutiques are available for high rollers. However, venturing into Hong Kong’s street markets offers a glimpse into its essence as one of the world’s premier trade ports. Highlights include Temple Street Night Market and Ladies Market, both accessible via MTR’s Mongkok Station. Tailored suits and shirts offer a unique shopping experience for men and women seeking custom swag. Punjab House is highly renowned for quality and style, but comes with a higher price tag. Jim’s Tailor Workshop and Raja Fashions are popular with expats for their quality and affordability.  Keep in mind that three visits are usually required—the first for measurements, the second for fitting, and a third for pick up, although most shops will ship the final product to destinations abroad.
3. Historical & Traditional The Hong Kong Story at the Hong Kong Museum of History stretches from 400 million years in the past up to the 1997 reunification with China, but you can cover the highlights in about 1-2 hours. The Museum of Coastal Defence is a historic monument honoring Hong Kong’s stand against the Japanese invasion of 1941, not to mention a unique and interesting museum. Buddhist influence can be found throughout Hong Kong, but nowhere more prominently than the Tian Tan Buddha (aka “Big Buddha”—the largest sitting Buddha in the world) near the Po Lin Monastery on Lantau Island. Lantau Island is accessible by ferry or via MTR to the Ngong Ping cable car stop. From the Big Buddha, a hike along the Pilgrim’s Path to the west leads to Tai O, a traditional fishing village featuring old stilt houses lining waterways, fresh seafood restaurants, and beautiful sandy beaches in the nearby village of Cheung Sha.
4. Nature Escapes Don’t overlook Hong Kong’s natural beauty, which sometimes gets lost amid all the big city bustle. For starters, right in the middle of Central District is a sprawling botanical garden that offers quiet walking paths, shaded tree groves, and a handful of small primates swinging in their cages. Head outside of the city by taking a ferry to Lamma Island. Stroll through a charming village dotted with cafes and boutiques, past the playful Hung Shing Yeh Beach, and up through the rolling hills for a view of the sea, sand, and a stunning sunset. Stop at one of the seafood restaurants just past the ferry terminal for a fresh feast, or bring a picnic to enjoy on the beach or the hiking path. To the north, the New Territories offer some unexpected natural secrets. The Saikung Peninsula boasts several hiking trails and hidden beaches. If you’re up for a hike, follow the Maclehose Trail through the mountains, or take an illegal (read: frowned upon) speedboat to Tai Long Wan. Sometimes you’ll find surfers enjoying the waves, but you can expect to have the beach to yourself most of the time.
5. Food, Drink, & Nightlife The reason to stick around Hong Kong on a Wednesday night: Horse races at Happy Valley starting at 7:30 pm. Gain admission with your Octopus Card and you’ll find yourself rubbing elbows with anyone from blue-collar workers to bigwig bankers. Place your bets with plenty of time to grab a pitcher of beer, some Hong Kong style roast meat, and a view of the horses coming out of the gates. After the races, head to Wan Chai with the rest of the expats for what has the potential to turn into a wild evening. Any other night of the week Lan Kwai Fong, located in the Central District is the place where expats and natives quench their thirst. Clubs, pubs, bars, restaurants and more line the streets, some of them open until the sun comes up. If partying until sunrise is your scene, try Senses 99 where skills on guitar, bass, or drums might be the difference between going home alone or having company for another drink. 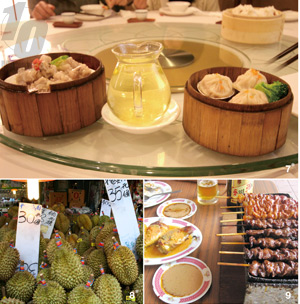 Shots by Mike Luedke and Vai Yu*
1 The Bank of China Building is arguably the most photogenic skyscraper in the world.
2 Wednesday night horse races at Happy Valley can turn into big fun.
3* The Ngong Ping cable car takes you up to see the Big Buddha.
4* Stunning scenery surrounds the world’s largest sitting Buddha (34 meters) on Lantau Island.
5 Be sure to look both ways before crossing Hong Kong’s bustling streets.
6 The action is heating up at Temple Street Night Market.
7* Dim sum is one of the reasons Hong Kong is considered a global food mecca.
8* Stacked durian fruit fill a display at a local market.
9 Shatin Inn’s Indonesian cuisine is one of the city’s international dining options.

One last thing
Hong Kong is a mash-up. Beyond the urban-countryside, East-West, land-sea comparisons, the people of Hong Kong represent a diversity of backgrounds and experiences, from their mostly Chinese ethnic heritage to the pervasive use of English language and Western style. Take a moment between snapping pictures to ask a local for help picking the best items off the dim sum menu, for directions to their favorite beach, or just to say “Hello.” In doing so, you’ll find one of the principle sources of Hong Kong’s charm—her people. So, jump in headfirst, do as the natives do, and have a blast in one of the world’s premier international cities—Hong Kong.

Essential Eats: Hong Kong
Traditional A trip to Hong Kong is incomplete without dim sum. You’ll have to jostle a bit for your seats and eats at popular spots like Lie Heung Tea House where crowds gather around breakfast and lunch to grab morsels from the passing food trolleys. RUNNER UP: Roast goose from the legendary Yung Kee Restaurant (yungkee.com.hk).

International Mouthwatering satays served with peanut sauce and a refreshing Gado-gado salad make the Indonesian cuisine at Shatin Inn worth the trip off the beaten path. RUNNER UP: Chungking Mansion’s unsavory reputation can’t hide the incredible Indian food on its second floor.

Seafood It’s no secret among Hong Kongers that Lamma Island’s seafood is the best in town. Hop a ferry and head to Rainbow Seafood Restaurant (rainbowrest.com.hk) and you’ll understand the hype. RUNNER UP: Boardwalk, beach, bomb seafood: Sai Kung Town.

Late-night Few foods satisfy the drunken soul like a greasy breakfast. With two convenient locations open 24/7 in the party hubs of Wan Chai and Lan Kwai Fong, The Flying Pan serves up a delicious fix.
RUNNER UP: Can’t get enough garlic sauce on Ebeneezer’s kebabs (ebeneezers.com)—open super-late near hot spots around town.

Private Kitchens Make reservations well in advance, get precise directions, and bring some extra cash to get involved in one of the world’s most unique food fads. World caliber cuisine cranked out by rock-star chefs, such as Chef Alvin Leung Jr’s Bo Innovation (boinnovation.com) serving “X-treme Chinese.” RUNNER UP: The braised ribs at Yellow Door Kitchen (yellowdoorkitchen.com.hk) are a thing of beauty, and so is the jazz music down one floor at Blue Door.