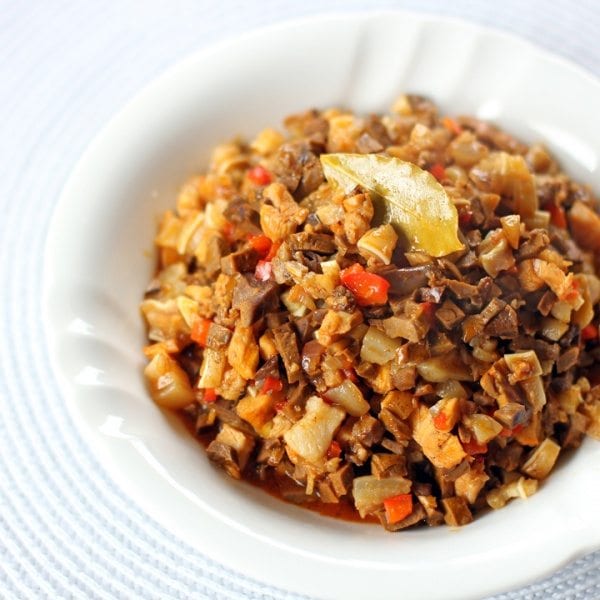 When Korean food gets too spicy for your liking, there are many other cuisines worth trying—including Filipino food in Seoul. If you’re up for something savoury, you will find that Pinoy food is a solid choice.

Be warned: You will need to do a little digging. Unlike Chinese, Japanese, and Thai food or American and European classics, you won’t come across Filipino food easily in Korea.

We’ll tell you where to find Filipino food in Seoul in a little bit. Let us get you excited and show you the food you must try first.

* Disclaimer: Some photos came from recipe websites instead of actual Filipino food in Seoul, so you can check the ingredients or make the dish at home if you can’t find it in Korea)

It’s probably the Filipino counterpart of the Korean daegutang (대구탕) or spicy cod fish stew (except that bopis really isn’t a stew, it uses red meat and meat innards, and its veggies include carrots, tomatoes, chilis, and onions).

It’s a spicy dish of minced pork liver, heart, and lungs—hey, Pinoys love their red meat and don’t want to waste the innards! It might sound disgusting, but when cooked right, it’s very tasty actually.

The dish, known as a “pulutan” back home, pairs well with beer.

Get It At: JR Southern Style BBQ (on Sundays)

Kaldereta, another tomato-based dish, can be a little spicy (cincha jokeum, I swear!), unlike Korean food where even “mild” things can sting.

You can see that it’s quite similar to galbitang (갈비탕).

Sure, it tastes divine even with just vinegar, but it’s not “100% Pinoy” if you eat it without Mang Tomas, a pork liver sauce that’s a staple in Filipino homes.

Yeah, innards again, I know! You can even pair the sauce with rice, and you get an instant budget meal right there.

Pork belly stews in the juice of calamansi (citrus fruits that look like mini limes), along with soy sauce, salt, and pepper. Each slab traditionally gets grilled over charcoal for a smokey, savoury (but not-at-all overwhelming) taste.

Served with a side of soy sauce and more calamansi or vinegar (chili optional), inihaw na liempo can make you get more rice refills than you could imagine or have you drinking beer all night.

Get It At: Jovy’s Grill

This is the third and last “dry” dish on the list. It’s the Pinoy version of spring rolls, where the mixture is made with minced veggies and mostly ground pork.

(Side Note: If you haven’t noticed by now, Pinoys love pork and beef. We have chicken and fish delicacies, don’t get me wrong, but pork and beef rule our lunch and dinner tables.)

Lumpiang Shanghai is served with a sauce, naturally—this time a sweet and sour concoction.

Get It At: Kusina, JR Southern Style BBQ (on Sundays), Daehangno Philippine Market (on Sundays)

Contrary to what it sounds like, kare kare is not the Filipino version of curry. It isn’t even spicy.

The meat of the dish comprises oxtail, beef, and pork hocks. In many cases, chefs throw pig’s feet and tripe in the mix.

These meats then get stewed in a savoury peanut butter-based sauce and with vegetables like eggplants and bok choy or Chinese cabbage.

Get It At: Kusina

The dish is served with bagoong, a condiment made from fermented fish or shrimp and salt. Speaking of bagoong…

Here’s another way to enjoy pork—a dish where the meat is sautéed with bagoong. It’s another dish that will have you reaching for bowl after bowl of rice.

You can also try eating it with a side of green (unripe) mangoes to refresh your palate from all the salty goodness.

Get It At: Kusina

Here’s yet another dish made from meat and innards. You have pork, chopped pig’s face (snout included, yep), and chicken liver.

You also get a topping of raw egg, which gets cooked, as sisig is traditionally served in a sizzling plate.

Sisig is cooked in a variety of ways, and you can get anything from the crispy kind to the mayonnaise-drizzled chewy version.

Sure, there are some soy-based chicken dishes in Seoul that tastes a bit like adobo, but nothing beats the real thing. Choose from chicken adobo, pork adobo, or even the combo: chicken and pork adobo.

The perfect balance of soy sauce and vinegar, along with the unique taste of laurel leaves, makes the dish so memorable. Many foreigners who have tried this will tell you that you can’t get enough of this stuff, and you will definitely crave it a lot.

Get It At: Kusina, Daehangno Philippine Market (on Sundays)

Most Pinoys take pride in adobo the most, but personally, my all-time fave and comfort food is sinigang na baboy.

It’s pork with sour broth mixed with various vegetables, including kangkong (water spinach; Kusina replaced this with Chinese cabbage when I tried it), tomato, eggplants, radish, and green chili.

Tamarind, a sour, slightly sweet fruit, gives the dish its distinct and definitely addicting taste. Gabi (taro) may also be added to make the broth denser in consistency.

Pro Tip: Eat everything with rice—not the Korean sticky rice, but a drier version that’s a perfect match for all those sauces and broths. (Fun fact: Pinoys love rice so much that many restaurants and fast food chains in the Philippines even offer meals with “unlimited rice.”)

It’s perhaps the most famous Pinoy street food, and only brave/adventurous foreigners dare to try this delicacy. Balut is developing duck embryo that’s boiled, eaten from the shell, and served with some salt.

It’s not the most photogenic, foodgasmic snack, and it doesn’t look great in person, either. However, once you get past the squirm, you’ll realise how tasty it is—from the savoury soup to the fresh meat.

Get It At: The Daehangno Philippine Market (Sunday afternoons only)

Pair any of the Pinoy dishes with our homegrown beers! Both the San Miguel Pale Pilsen and Red Horse beers have a special place in many Pinoy drinkers’ hearts.

Now here are a few places to get your Filipino food fix. Note that they are really few. Too bad!

Where to Get Filipino Groceries in Seoul

This store is right beside the Philippine Embassy in Itaewon. The restaurant serves Filipino food and sells various Pinoy groceries, too. You can probably score a bottle or two of Mang Tomas here.

This Filipino-owned restaurant serves Western food on the daily, but on Sundays, they hold a “Pinoy Fiesta” from 2pm (with Karaoke Night starting at 5pm). It’s a few steps from Itaewon Station exit 4, and it’s on 3rd floor of the building.

The market pops up every Sunday from lunch time till around 4:00 or 5:00 p.m. You can try street food, get hearty meals, and buy groceries or snacks. You can easily spot it by taking exit no. 1 of Hyehwa Station (Line 4). Head right when you reach the intersection near Dongseong Middle and High School.

Locals (Koreans) frequent this place, perhaps for the affordable grilled meals and beer. It’s right at the line of stores and buildings along the Cheonggyecheon Stream (way beyond the Jongno area and Dongdaemun).

Finally, here’s a place you can visit almost any day of the week for some Filipino food in Seoul: Kusina. They have the largest selections, too. They’re only closed on Mondays, and they’re open from noontime till evening (12:00 or 12:30 p.m. to 8:30 or 9:00 p.m.) the rest of the week.

If you’re taking the metro, get off Noksapyeong Station (Subway line 6) exit no. 2, and walk straight towards the HBC neighborhood (head left when you get to the fork on the road). Alternatively, you can take the green bus 용산03 or 용산02, and walk from the nearest bus stop.

The place isn’t easily seen and doesn’t have a big sign, so keep your eyes peeled. It’s the first building to your left when you head toward Sinheung-ro 5-gil from Sinheung-ro.