Celebrate the Lunar New Year with a journey to see the very first Seollal Sunrise at Korea’s most eastern point.

What are your plans for New Year’s Eve in 4346? How about observing our nearest star on
its hazy morning rise, and bathing in the first rays of the year? 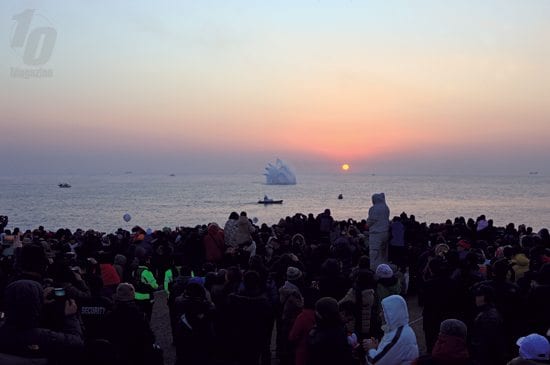 Hold on a minute! Why make such absurd plans? Surely, anyone currently present on Earth shall have unraveled from their mortal coils by then. Well, no actually. For you see, according to Korea’s Lunar Calendar, this Seollal on February 10th marks the 4346th year since the birth of the nation’s mythical founder, Dangun. Though to be honest, pretty much everyone in Korea uses the Gregorian calendar these days and rarely, if ever, even remembers the old traditional date.

As the moon waxes by on February 9th, the night before Lunar New Year, so begins a three-day national holiday here in Korea, which unfavorably falls over a weekend this year! The year of the Dragon ends and so begins the turn of the Snake. A sort of exodus ensues at this time of year as millions head to their ancestral homes.

Unlike the West’s tradition of bellowing along to the general tune of Auld Lang Syne, many in Korea usher in their traditional New Year with more grace and sobriety: by viewing the sunrise from atop one of their many mountains or along the vast stretches of Eastern coastline.

For anyone sojourning away in Gyeongsang Province this Seollal, one such place to observe this celestial wonder is Ganjeolgot Cape, a beautiful park tucked away near the southeast city of Ulsan. A peninsular in miniature, the headland is Korea’s most easterly point and as such, is the first place on the Korean mainland to be awash with the light of the New Lunar Year.

Accompanied by family and friends, denizens of Gyeongsang province feast on generous portions of rice cakes, soju and all manner of side dishes under the gaze of the full moon. No doubt you’ll be invited to dine with the reveling ajummas and ajeossis as they wait for the breaking of dawn.

What to See
Jangseung, which are traditional Korean totem poles erected to ward off evil demons, are some of the first to welcome the sunrise on Ganjeolgot Cape. Close by the totems is the largest post box in Korea (and quite possibly the world). A shameless tourist trap it might be, but the enormity of the thing is endearing nonetheless. Be prepared to have your camera on standby.

However the infinitely more photogenic Ganjeolgot Lighthouse perches on the hill behind the shoreline. Originally constructed in the 1920s in a bid to guide ships safely around the cape’s choppy waters and bitter rocks, the lighthouse’s main purpose today is to add to the overall quaintness of the park, which it does admirably.

After the Sun Rises
The sunrise here could not be any more picturesque and, as luck would have it, is available for your viewing pleasure on any of the other 364 days a year. So if you miss it, you needn’t wait for next Seollal—and besides, there’s plenty of other stuff to see.
Depending on the weather (or your tolerance of it) the very close-by Jinha Beach may be worth a visit. Hailed as a summer paradise by Korea’s tourist board, the lengthy beach certainly is beautiful and is also much more serene out of season.

There’s also Ulsan City itself. Though probably best known for its industrial prowess, the city has a surprising amount of scenic spots… according to the tourism board, 12 to be precise, with Ganjeolgot Cape being one of them. After you’re done with the Cape, check out the other 11—trekking up the forested inclines of Mount Gaji, frolicking in the river waters alongside Jakgwaechon Temple when the weather allows, or wading through the reed fields of Mount Sinbul are among the highlights. 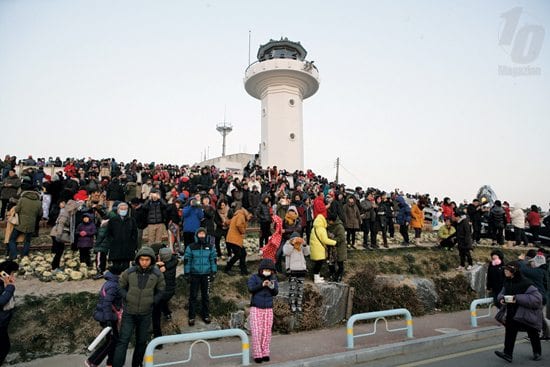 Getting There
The super speeds of the KTX train make reaching Ganjeolgot a laid-back affair indeed. Be sure to book any train/bus tickets well in advance of Seollal, as the entirety of Korea vacates too (and avoid the thronged slow trains at all costs!). From Ulsan Intercity Bus Station, you’ll need to catch bus 715 to get to the cape. Coming from Busan, catch the intercity bus from Haeundae Bus Station; it passes right by Ganjeolgot.