Rock Out With the Foo Fighters in Seoul

This summer, international rock icons will descend on Seoul to give a thrilling live stage performance. Representing American, British, and Korean rock; Foo Fighters, Liam Gallagher (lead singer of Oasis), and The Monotones will grace the stage for the “Live Forever Long” rock festival. “Live Forever Long” is a combination of the songs “Live Forever” and “Ever Long” by Foo Fighters and Oasis respectively.

With multiple Grammy awards and over 30 million albums sold worldwide, it’s safe to say the Foo Fighters have achieved cult status in the rock world. Founded by former Nirvana member Dave Grohl, Foo Fighters are defined by an alternative grunge sound, when mixed with the charming personality of frontman Grohl, makes for an irresistible listen. Grohl even performed with a broken leg during his last visit to Korea for the 2015 Ansan M-Valley Rock Festival and promised fans he would return; a promise he is about to deliver on.

The Foo Fighters recently released their eighth studio album in 2014, Sonic Highways, and are currently working on their ninth album; scheduled for release in either 2017 or 2018. Their schedule for most of 2017 will consist of recording their album and going on tour.

However, their success is not just limited to album sales. Critics like Pitchfork magazine have described the band as “a consistent hit machine pumping out working-class rock.”

Although they debuted in 1994, the band was embraced the new social media platforms available to them. Their YouTube channel has over 1 million subscribers with over 793 million lifetime views.

Best known to fans worldwide as the former lead singer of British band Oasis and Beady Eye, Liam Gallagher has carved himself a niche as one of the world’s most popular rockers. In a 2010 poll conducted by Q Magazine, readers voted Gallagher as the greatest rock frontman of all time.

His former band (Oasis) have produced hit songs such as “Wonderwall” and “Don’t Look Back in Anger”, which both reached top 2 on the US Billboard charts. Both songs have over 60 million views on YouTube and their Facebook page has amassed over 9 million fans from all over the world. Gallagher himself penned other hit songs such as “Songbird” and “I’m Outta Time”, where he was praised by critics for his “surprising talent for songwriting” (CMJ New Music Report).

Gallagher has made multiple trips to Korea and his shows have been constantly sold out.

In fact, fans have even requested extra shows to make up for the demand. Since the disbandment of his bands, Gallagher will embark on a solo tour for the summer of 2017. A solo album is planned for release titled “As You Were”.

Founded by guitarist and indie idol Cha Seung-Woo, The Monotones were a highly anticipated band on the indie scene. However, frequent member changes delayed their debut until 2012, when their album “Into The Night” was released.

The album was released three years after their debut and through many hardships; with a final three member lineup; (vocals: Hun Joe, guitar: Cha Seung-Woo, drums: Choi Wook-No). Arirang K-Pop stated the band left a favorable impression on “critics with their aggressive, gentle, sophisticated, yet romantic sounds.”

Founding member Cha, is an idol in the indie rock scene and was a former member of iconic bands like The Monotones and No Brain. Drummer Choi, has performed at major music festivals such as “The Great Escape” and “Liverpool Sound City”. Lead singer Hun, grew up in the United Kingdom and brings the added twist of a singer capable of performing English songs with genuine emotion.

How to Buy Tickets

Tickets for the festival will be sold exclusively via Melon tickets, either by phone (1899-0042) or through their website (ticket.melon.com).

Standing room tickets will be based on a standing number for the entry. 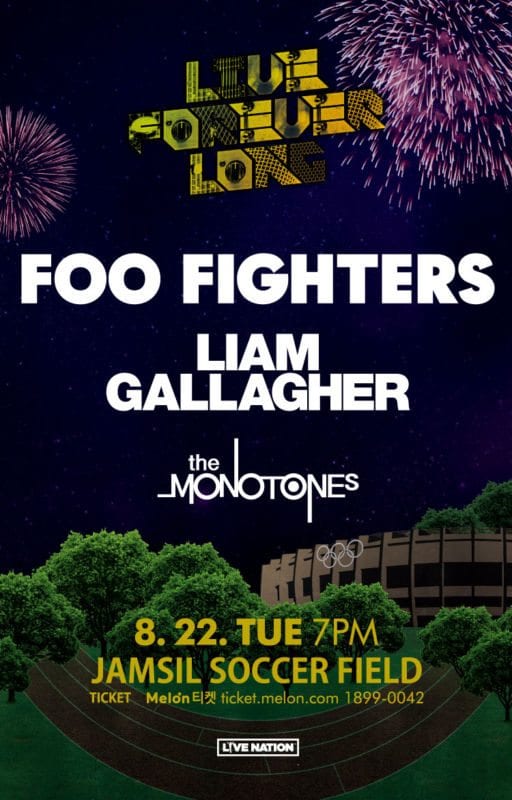