Relationships: To Pay or Not to Pay?

Words by D. Chase Kang and Rhiannon May, illustrations by Sidney Goulet 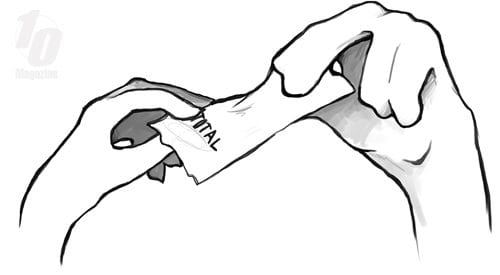 Ah, womens.It’s all about equality and Girl Power… until the check arrives, am I right?Okay, that’s not really fair. But it’s accurate! Many still cling to the Disney model of chivalry popular back when women were dependent and had fewer resources than men. In Korea, Confucian tradition further perpetuates this convention with the paradigm of the eldest male taking responsibility for the welfare of the group. What’s a modern liberated man to do when it comes to paying for dates?

First, I think it’s fair that the inviter pay for the first event, just as a show of good faith. For that reason, a place for coffee, ice cream or a casual drink should be the preferred venue of choice. It’s officially lame to invite a girl to the grand buffet at the W Hotel for a first date, since it precisely plays into the old model of trying to impress her with your cash instead of your character—and can create for her the uncomfortable feeling of obligation.

Second, swallow some of your manly pride and allow or contrive an opportunity for her to return the favor. It doesn’t have to be equal in magnitude, only in intent. Coffee after a light meal or snacks after you’ve paid for admission is fine. And in my experience, there are women who are happy to keep things on an even and gracious keel—while there are women who only begrudgingly offer, while secretly categorizing you as a cheapskate. Why waste time with the latter when you can invest in getting closer to the former?

Finally, don’t actually keep a running tally of debits and expenditures on your date. That way madness (not to mention forever alone-ness) lies. But you don’t need to be one of those militant “Men must pay for everything” relics, either. Cultivate your inner Buddhist and seek the middle way—right into her heart!

My experience of the ol’ paying-the-date-bill dance is perhaps a little skewed by the fact that, apart from my first “proper” boyfriend back when I was a penniless student myself at the age of eighteen, I’ve never seriously dated anyone who had a full-time job. Ignoring the sighs of my parents (which I can almost hear from five and a half thousand miles away), as a young woman in Korea, I’m not that much of an anomaly. Two years of compulsory military service and the often three-to-four year delay this causes university graduation for males in Korea means that, more often than not, a guy in his twenties will not be the main breadwinner in a male-female couple of a similar age.

How far this actually affects date-paying rituals here is another matter. As Chase said, notions of chivalry and monetary expectations when it comes to dating in Korea exist in a way that they don’t so much nowadays in the West.

For me, I’m personally alright with things being 50/50 when splitting the dating-bill. But by this, guys, I definitely don’t mean literally splitting it. I mean taking turns. Bring up “dutch pay” over our appetizer and I will shoot you a look of death. There’s nothing like sitting counting out coins and notes after a meal to destroy an otherwise romantic mood!
– Rhiannon May

D. Chase Kang: When it comes to relationships, Chase believes that we should not wish things were easier, but rather wish that we could rise better to the challenge.

Rhiannon May: Having recently begun her fourth year in Korea, eighth year of proper dating, and twenty-fifth year of being alive, Rhiannon has just about perfected the art of being terrible at following her own advice.

Relationships: Exes and the Past-The Art of Discretion