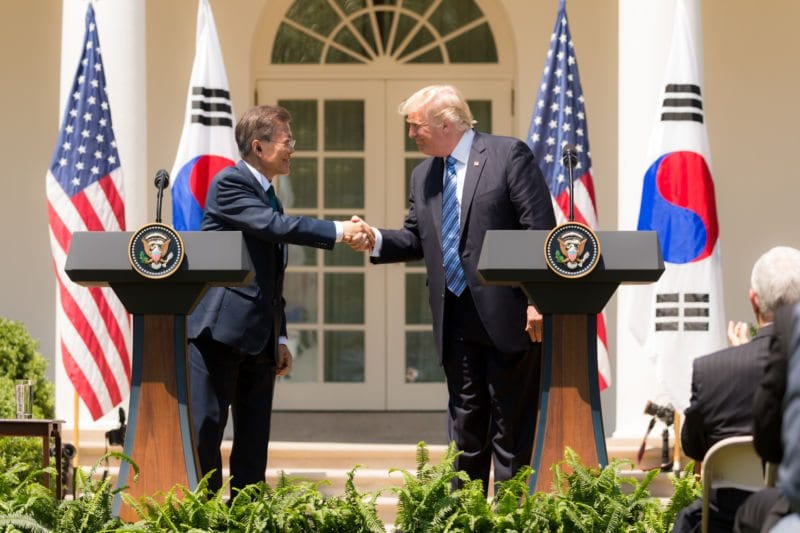 President Donald J. Trump and President Moon Jae-in of the Republic of Korea participate in joint statements on Friday, June 30, 2017, in the Rose Garden of the White House in Washington, D.C. (Official White House Photo by Shealah Craighead)

President Moon Jae-in has completed his first foreign trip abroad as president of South Korea. He met with U.S President Donald Trump to discuss North Korea, trade, and to reinforce the alliance between the two countries. Both leaders were pleased with the way the summit took place and agreed to continue working together on issues of importance for both countries.

On Wednesday, June 28, President Moon visited a memorial honoring Marines who fought in rearguard U.S. action in 1950 that enabled a mass evacuation of Korean civilians, including Moon’s parents. The next day, Moon visited the Korean War Veterans Memorial, where he was accompanied by Vice President Mike Pence, whose father served in the U.S. Army during the Korean War. There, the South Korean president paid his respects to U.S veterans who lost their lives during the Korean War and expressed his gratitude to all those who made sacrifices for South Korea during the war.

The South Korean president and his wife, Kim Jung-sook, were later invited to dinner at the White House. They had bibimbap, a traditional Korean dish, while holding constructive discussions on various issues concerning the Korean Peninsula. The two leaders also discussed the possibilities of a new trade deal that would be mutually beneficial to both countries, but no further details were given.

Towards the end of the dinner, President Trump invited President Moon to the third floor of the White House, the U.S. President’s private living space, where he was given a tour of the Lincoln Bedroom. U.S State Department officials later explained that it is not common for foreign leaders to be invited to the private quarters of the U.S president.

The two leaders held a joint press briefing on Friday morning, June 30th, where they reaffirmed the strong alliance between their two countries and vowed to continue working together on important issues. The most important point of discussion centered around North Korea and its nuclear ambitions. President Trump has made clear that he considers the North Korean issue to be a threat to U.S national security and recently confirmed this by continuing the national emergency concerning North Korea beyond June 26, 2017.

During the press briefing, President Trump stated that the North Korea issue required a determined response. He also added that the era of “strategic patience” with them has failed and that patience is over. President Trump also expressed his intent to continue working with regional partners on measures to protect them from “the menace that is North Korea”. He called upon other regional powers and “responsible nations” to implement sanctions, demanding that North Korea “choose a better path and a different future for its long-suffering people”. He finished off by stating that the goal of the U.S is to have peace, stability, and prosperity in the region, but that the U.S will always defend itself and its allies.

At present, it is unclear if the two leaders will be able to come to a consensus on how to deal with the North Korean issue. Each respective president has advocated for a different approach to handling the threat. President Moon Jae-in was elected on the basis of softening the stance on North Korea, attempting dialogue, and being less outwardly aggressive towards the northern neighbor than previous administrations. On the other hand, President Trump has called for more sanctions and stronger actions against the North Korean regime. Nevertheless, during the press briefing, President Moon said that he and President Trump had agreed to work for a complete, phased denuclearization of North Korea. Moon also noted that the countries will further strengthen their joint defense capabilities against North Korean threats.

Presidents Moon and Trump also spoke about economic ties and future plans for increased business cooperation between the two nations. President Trump said that he wants a “fair and reciprocal economic relationship with South Korea” and to work on “fair burden sharing”. He also stated that President Moon should create an environment where U.S companies can have a fair chance of doing business in South Korea.

Trump has been critical of the 2012 U.S-Korea Free Trade Agreement and has expressed his intention on changing or completely scrapping the deal. Last year, South Korea had a trade surplus of $17 billion with the U.S, including both goods and services. Trump hopes to make the deal more beneficial for U.S businesses. Later on Friday, the White House confirmed that U.S. Trade Representative, Robert Lighthizer, was calling a special meeting to “start the process of renegotiating and amending the deal.”

I am encouraged by President Moon’s assurances that he will work to level the playing field for American workers, businesses, & automakers. pic.twitter.com/DfsTyS4KUo

President Trump also called on South Korea to stop “enabling the export of dumped steel” and to give U.S carmakers a fair chance to do business in the country. “South Korean companies sell cars in America. American companies should have that same exact privilege on a reciprocal basis,” Trump said. To put the imbalance in perspective; South Korea exported $16.1 billion worth of cars to the U.S in 2016 while it only imported $1.6 billion in U.S cars. That said, the two leaders do seem to have had productive discussions.

Trump said that he was “encouraged by President Moon‘s assurances that he will work to create a level playing field so that American workers and businesses, and especially automakers, can have a fair shake at dealing with South Korea”. President Moon said that he had “candid and lengthy” conversations with Trump and that these talks confirmed his initial impression of the U.S President as a “bold leader that made pragmatic decisions”.

On the last day of his visit, President Moon hosted a meeting with members of the Korean-American community. About six hundred people from across the country attended the meeting. The South Korean President encouraged Korean-Americans to continue being a bridge between the two countries and he also took this opportunity to reinforce the strong U.S-South Korea alliance. After the meeting, the South Korean leader and his wife headed to Joint Base Andrews to fly back to South Korea, marking the end of President Moon’s first official visit abroad.

Overall, the South Korean and U.S leaders had a positive summit and made it clear that the alliance between the two countries was still very much strong and important. Both Moon and Trump understand that North Korea poses a serious threat and that actions must be taken to curb its ambitions. Although their stances differ on how to do so, both leaders agree that the issue should be at the top of their agendas and that they need each other to bring peace to the Korean Peninsula. Escalating tensions in the region call for increased cooperation and a strong, stable, and reliable U.S-South Korean alliance.