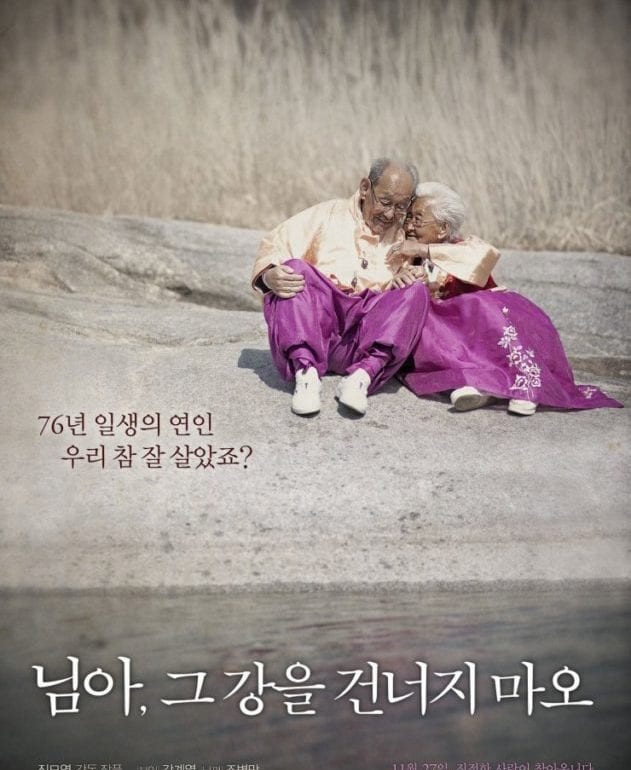 My Love, Don’t Cross That River Following in the tradition of Old Partner, this record breaking movie took the box office by storm at the end of 2014 to become highest grossing Korean documentary of all time. It may have beaten man and cow in terms of audience, but is it a better film and does it treat its subjects with the respect they deserve?

We are allowed into the lives of husband Jo Byeong-man (98 years old) and wife Kang Kye-yeol (89 years old), an elderly couple still going strong after 76 years of marriage. We see them work, rest and play together, but as time passes Jo becomes weaker and his health starts to decline. We join him and his wife on that journey, and are witness to some very intimate and painful moments at the end of his life. My Love, Don’t Cross That River is an odd mix of comedy and tragedy. Jo and Kang start the film seemingly playing to the camera – throwing leaves at each other, putting flowers in their hair and building snowmen – but soon the film descends into sadness as we see age take its toll, and the beginning of the end of a beautiful partnership. Those early comic moments seem to lack sincerity and as the film moves on into darker territory, you may feel a growing sense of unease. Have scenes been staged? Are Jo and Kang being manipulated? And should the director show all that he does in the film?

We are exposed to family arguments, medical examinations, sometimes shocking images and moments of pure grief. An assault on our emotions, but it feels exploitative. We are thrust into the most private parts of their lives, and director Jin Mo-young seems willing to show more than some viewers may be able to handle. Some may consider this to be voyeurism in the extreme, and my viewing partner was so upset by the handling of this elderly couple’s story that she could not watch the entire film.

Jo and Kang are beautiful human beings and their story is incredible, but once My Love, Don’t Cross That River finishes you may feel like a voyeur who has seen a little too much. This movie attempts to deal with the same issues of love, loss and death as Old Partner, but it only succeeds in thrusting us far too deeply into the lives of these extraordinary people.