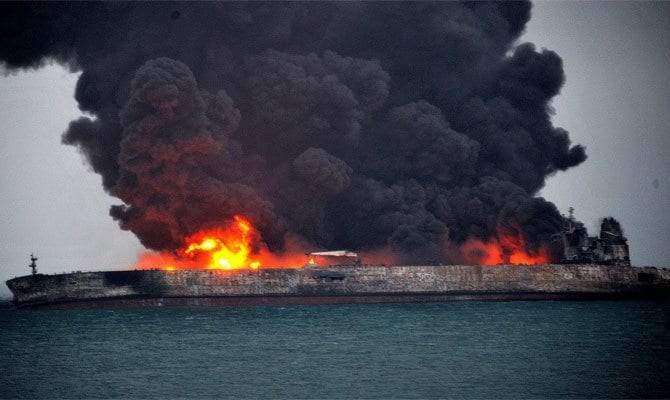 Earlier this month, on Jan 6, an Iranian tanker called the Sanchi collided with a freighter, burst into flames, and eventually sank into the East China Sea. The thirty-two crew members on board the ship are presumed to have all died in the collision.

Also on board the Sanchi were more than 136,000 tonnes — or one million barrels —  of condensate, a type of extremely flammable light crude oil. All of the oil on board the ship spilled into the East China Sea when the ship went down.

Condensate is difficult to see in the water, making it complicated to track the extent of the spill’s scope.

The Severity of the Sanchi Spill

Richard Steiner, a marine scientist and oil spill consultant, believes that “the toxic plume that dissolved in the water column has already spread over hundreds of square miles of the East China Sea.”

The International Tanker Owners Pollution Federation has stated that the recent Sanchi collision is the worst tanker spill in 35 years.

Why The Spill Is Important

The accident is expected to reach the marine life and fishing grounds of South Korea, China, and Japan within a month, polluting the fish and marine life that will eventually end up in the markets, stores, and on the dinner tables of the countries’ citizens.

The worst tanker oil spill in decades is unfolding across hundreds of miles of the East China Sea after an Iranian oil tanker carrying more than 100,000 tonnes of toxic oil collided with a freighter and exploded. https://t.co/p9zvV5eRqS pic.twitter.com/AWlHub3ENv

While experts have stated that the best course of action in the aftermath of the collision is to temporarily shut down nearby fisheries until they ensure that the fish are not contaminated, no action has yet been taken to begin the process.