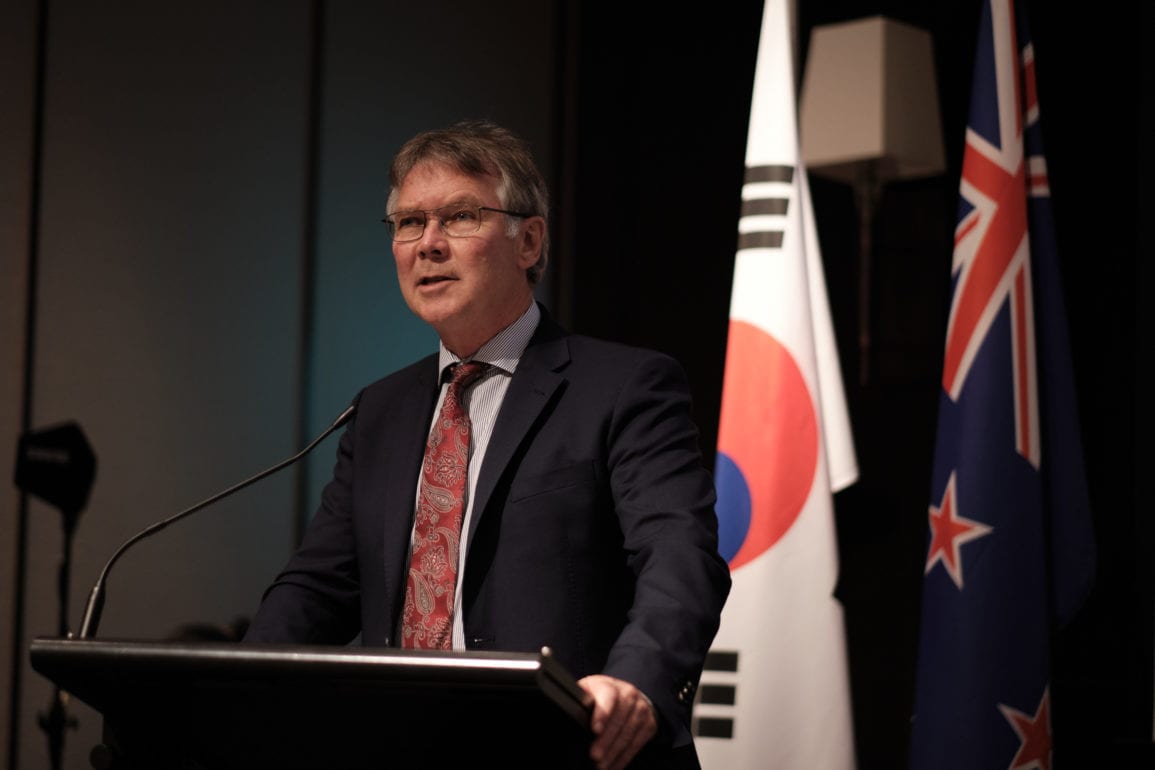 The Kiwi Chamber and the New Zealand Embassy welcomed keynote speaker Hon David Parker, Minister for Trade and Export Growth, who took centre stage for the 2019 Year End Grand Hui with a passionate speech on “Korea and New Zealand – A Modern Partnership for Challenging Times.”

Minister Parker emphasised the strong nature of the relationship between the two countries – one of long-standing friends who share a critically important set of values which make them natural partners.

He noted that the trade relationship between Korea and New Zealand is in excellent shape with considerable untapped potential for partnership. Almost five years after implementing the Korea-New Zealand FTA, bilateral trade has increased by 25% to NZ$5 billion, underpinned by the strong growth of New Zealand food and beverage exports.

Korea and New Zealand have also enjoyed successful collaboration in areas such as 4D technology, health robotics, agritech, digital film technology, and joint Antarctic research, and in emerging areas like the hydrogen economy.

New Zealand is one of the best places in the world to sustainably produce and supply “green hydrogen,” and over 80% of New Zealand’s electricity is sustainably produced from hydro, geothermal, solar and wind. Korea, with its hydrogen technology development in the automotive sector, is a great partner for cost-effective green hydrogen as it aims to overcome its challenges in moving toward sustainable energy.  Earlier today Minister Parker presented a Letter of Intent to Korea’s SEA LH2 Consortium on behalf of the New Zealand Government and a consortium of New Zealand energy companies to signal intent to collaborate on developing trade in green hydrogen.

“Minister Parker’s visit to Korea along with trade delegation is a reflection of the thriving growth and business partnerships that exist between our two countries,” remarked New Zealand Ambassador to Korea Philip Turner at the event. “It provides a spur for further growth and collaboration and contributes to our ongoing efforts to increase the profile of New Zealand’s activities here in Korea.”

Minister Parker also presented Kiwi Chamber scholarships to two students from Songjukwon Girl’s Residence to study English in New Zealand. “Having Minister Parker present the scholarships as part of our education initiative was very special,” said Dr. Tony Garrett, chairman of the Kiwi Chamber. “What an honour for the young students, as New Zealand is an excellent place to study with over 7,000 young Koreans currently studying there.”

The Hui, a traditional Māori social gathering, was attended by over 300 dignitaries from the public and private sectors and included a New Zealand Trade and Enterprise (NZTE) organised trade delegation with 12 top business leaders representing some of New Zealand’s signature companies.