Incredible Images From the Seoul 11/14 Protests 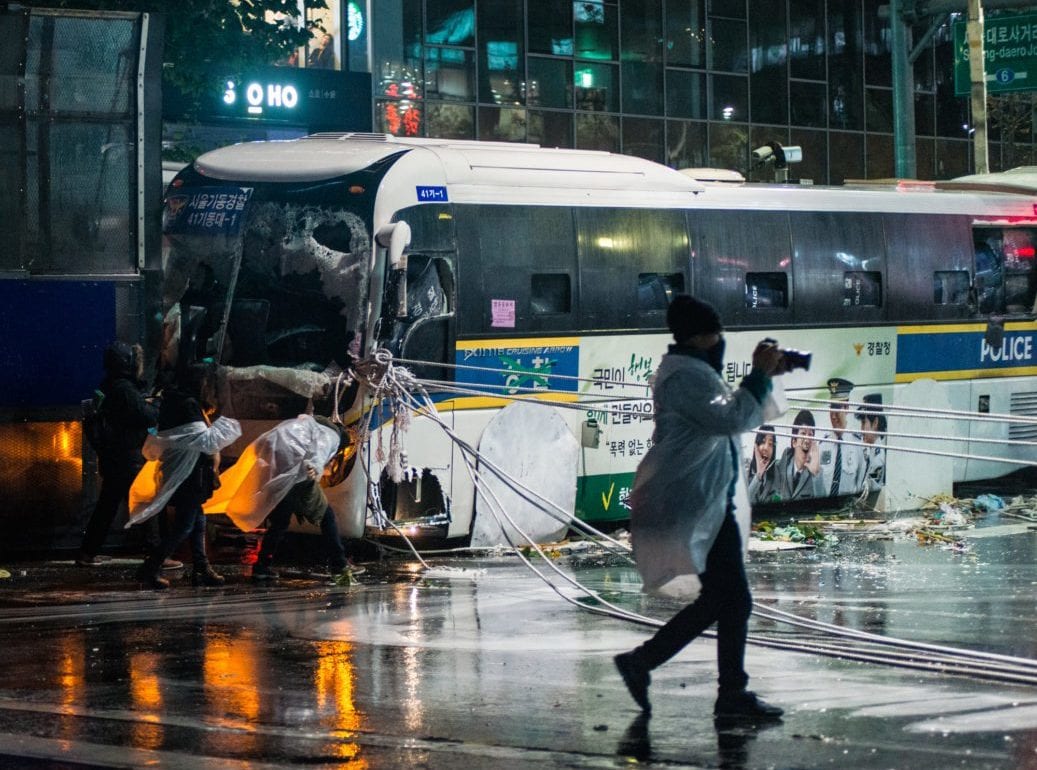 An interview with photojournalist Patrick Murray who was on the ground at the Seoul 11/14 Protests. 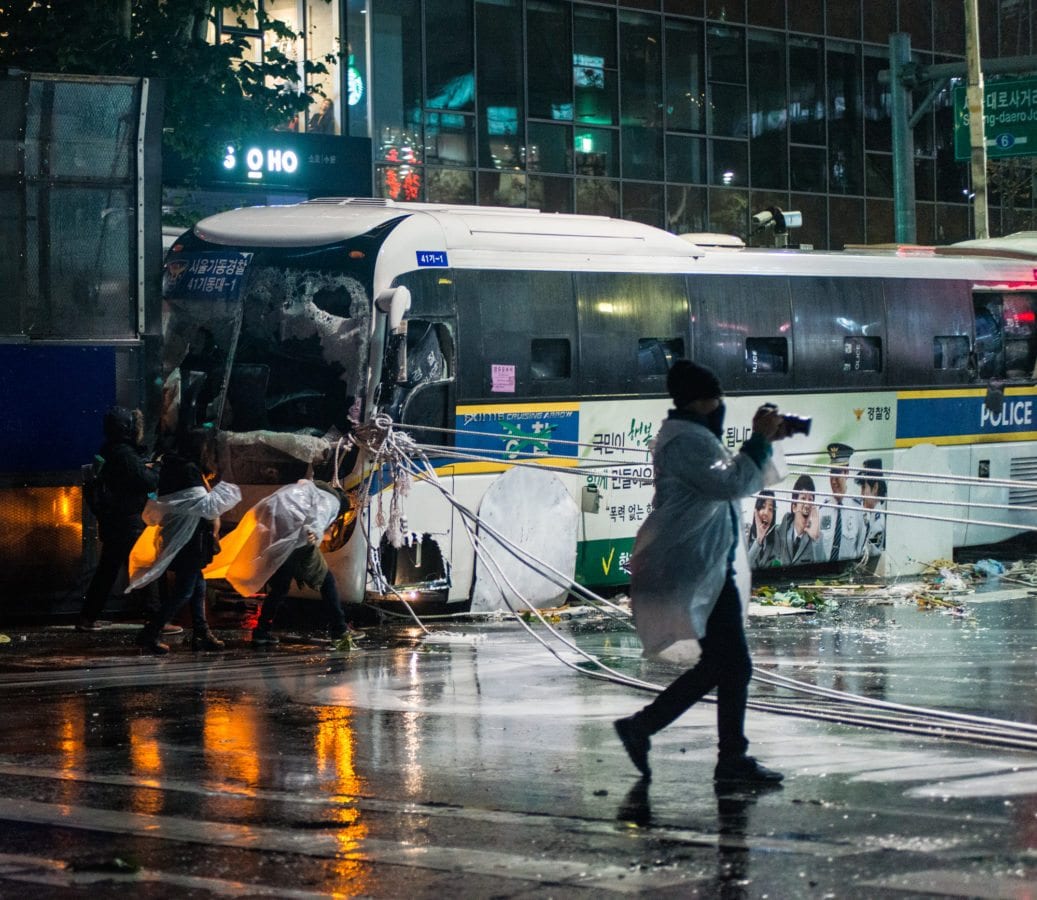 Photo journalist Patrick Murray covered last Saturday’s rally in Seoul where tens of thousands gathered to protest a range of government policy changes from labour reforms to streamlining of Korean history education. Police estimated the number of attendees at around 70, 000, 50 of whom were reportedly arrested after the rally. Protesters had intended to culminate the event at the presidential office but were thwarted by police who constructed barricades across their path using polices buses. Some have criticized police for their use of water canons and tear gas on the crowd. The government has since vowed a crackdown on any further “violent protest”.

10 Magazine spoke with Patrick about what it was really like on the ground at last weekend’s rallies. All of the incredible images in this post were take by Patrick on the day. 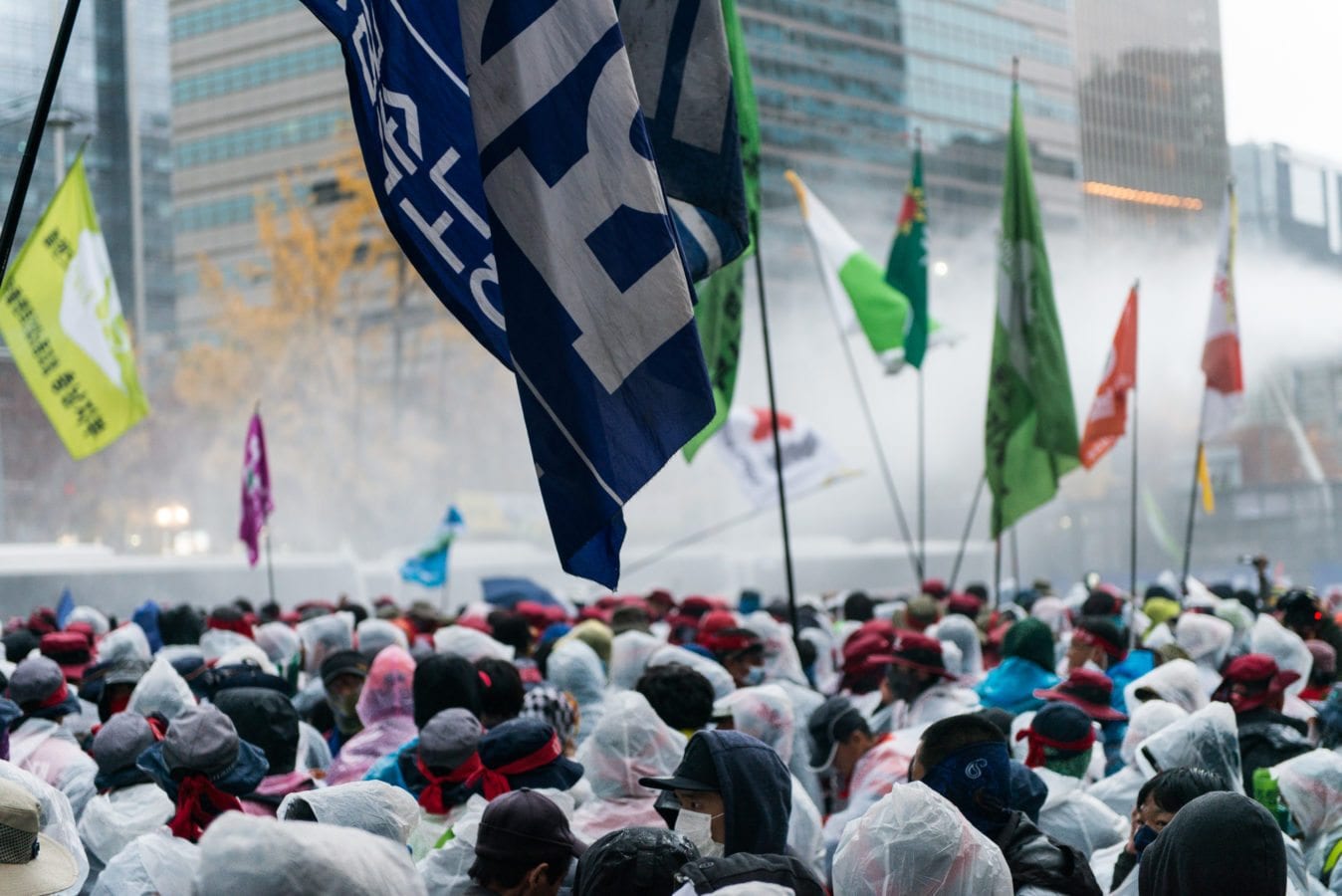 What the heck made you want to go to these demonstrations? How did you hear about them?

Well, photography is my passion in life and I feel demonstrations and protests must be documented.  I guess you could say, I am actively interested with what goes on in the world.  I think it’s important the rest of the world sees what happens with an unbiased eye, in any region.  I have some Korean friends in the media, and they gave me a heads up on what was scheduled.  It was common knowledge though. 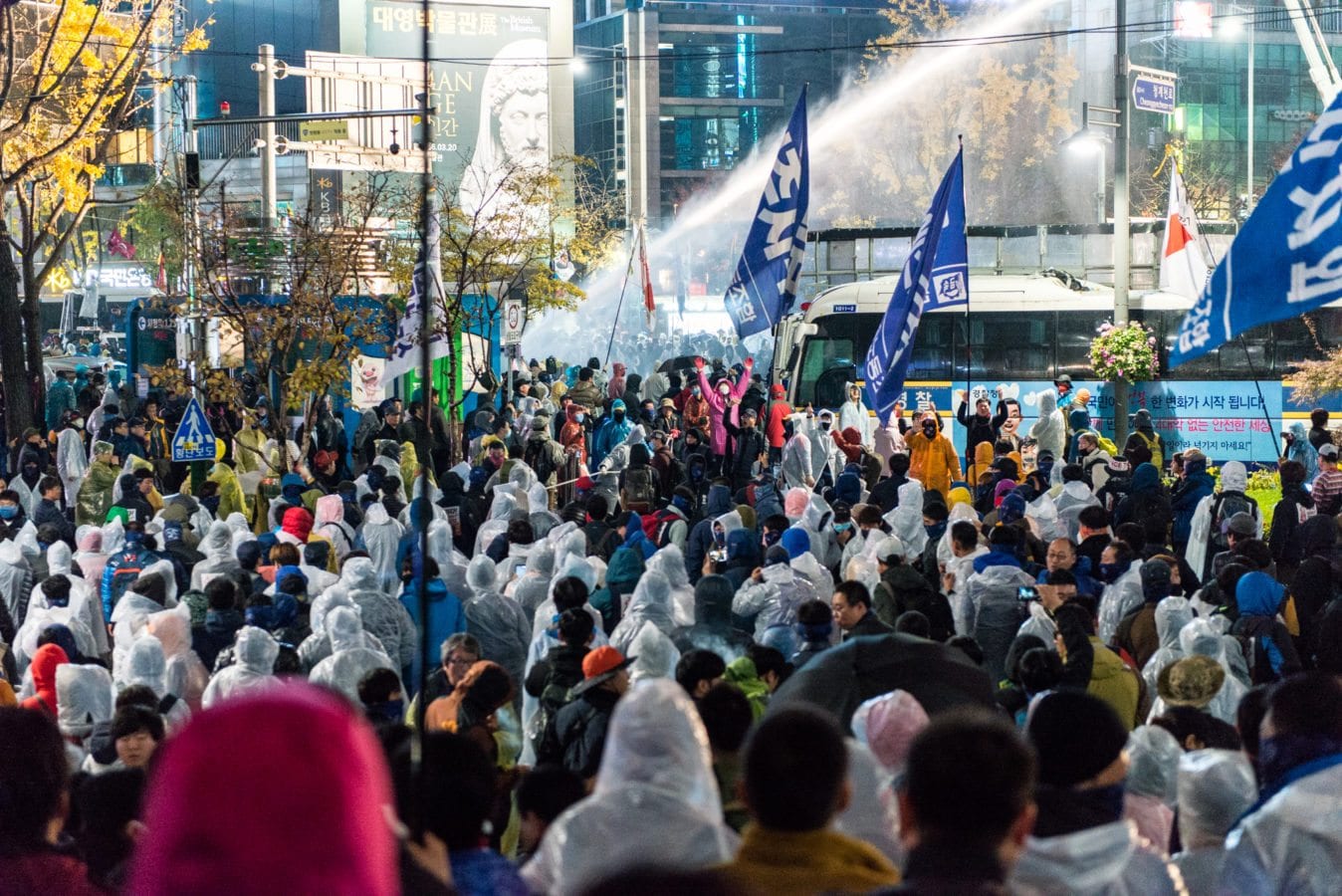 Have you done this sort of thing before?

Yes.  I was on the peninsula during the Sewol anniversary and headed down to Gwanghamun to see what was happening, not to participate though.  I was visiting the Sewol memorial that day. 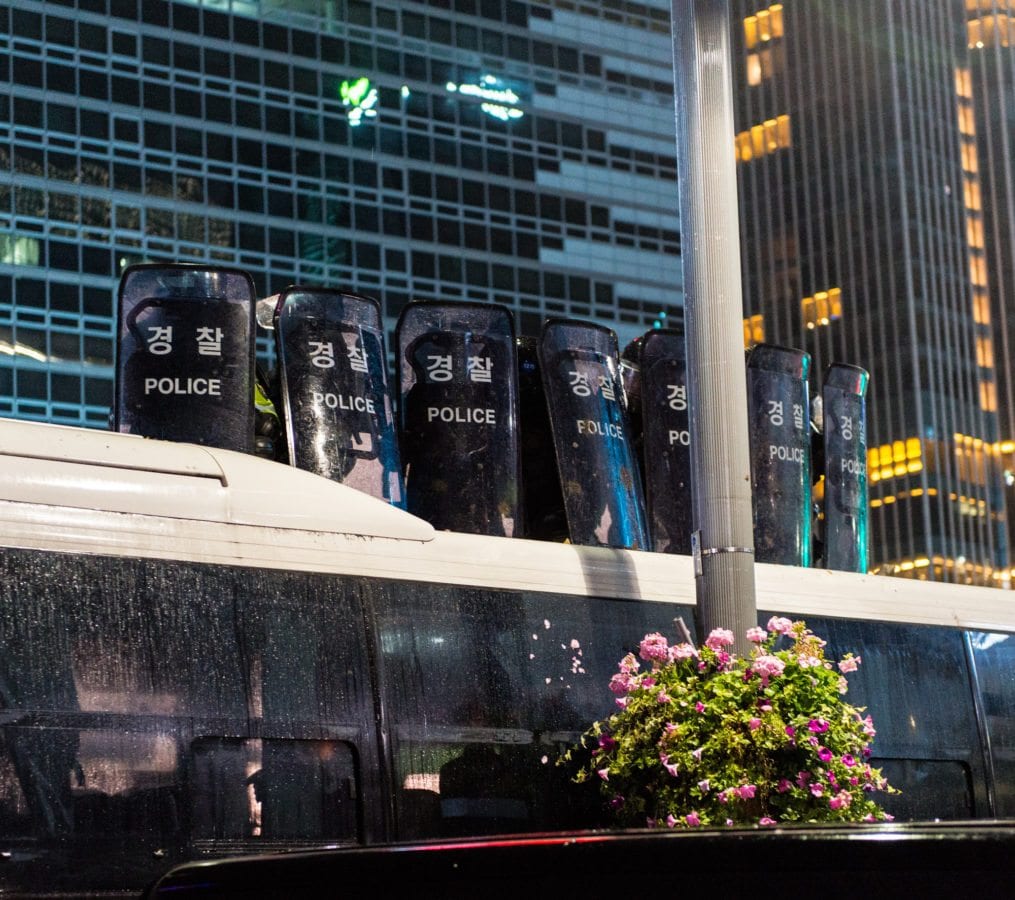 What was your first impression of the crowds when you arrived?

First impression?  People were definitely passionate about their message and you could feel the frustration in the air.  You had so many different groups converging at once.  One thing I have noticed in Korea is that when a demonstration/protest happens it is quite common other organizations/groups will join as well and bring their message/grievances into the fold.  Unite, basically.  There was not any searing tensions or groups gearing up for a melee or anything like that.  You could see people of all walks of life out there… young students (high school and university), male/female adults, many demonstrators even had their families with them, (young children).  I think it’s important to note that while there were tense clashes and damage throughout the day/night… things were kept relatively calm, as opposed to previous protests in South Korea, Canada, and the US.  I noticed a fair number of police officers who had become separated from their group or were patrolling areas on the protester side of the barricade.  They weren’t accosted or attacked, nobody was trying to hurt them.  Also, the torches… they brought them out, made their point, turned around and distinguished them far from the front line.  There must have been 40 or so torches, easily more than enough to inflict major damage had they wanted/intended to. 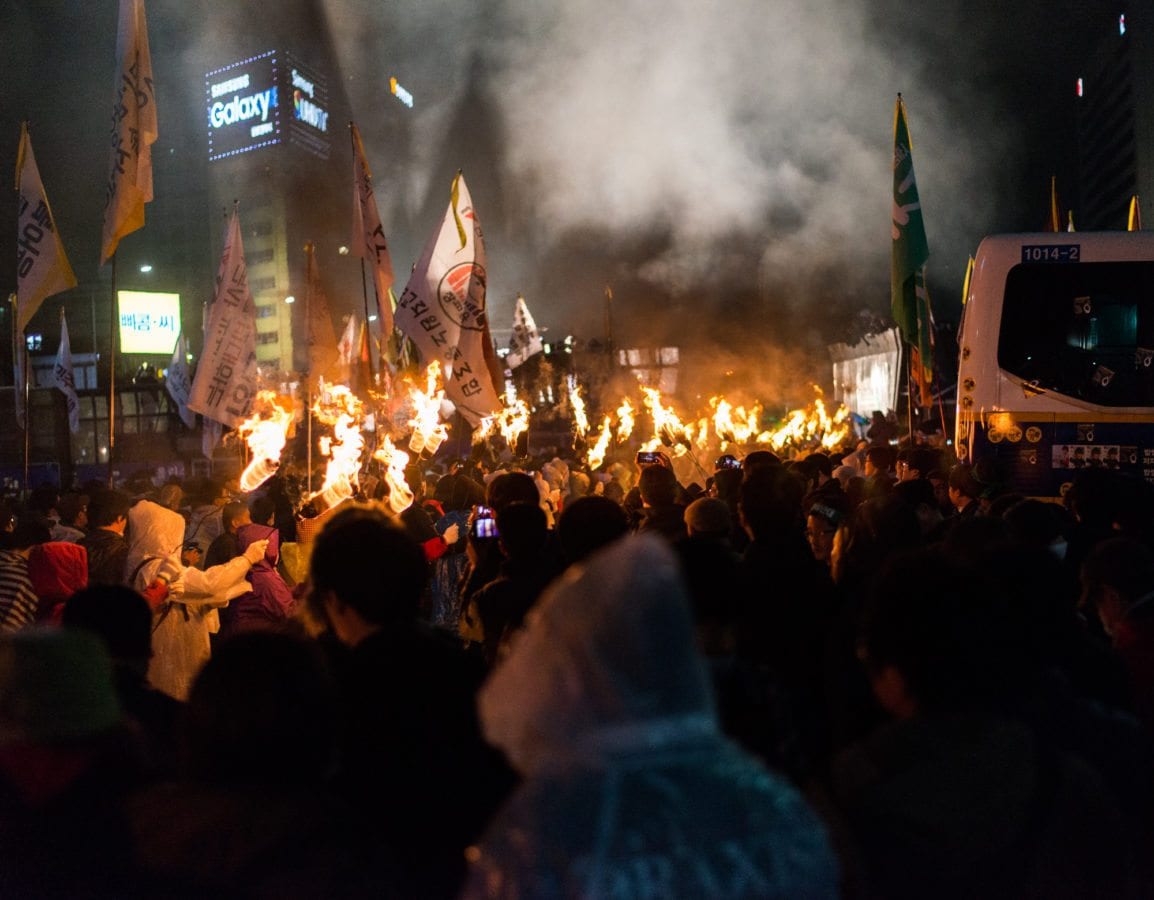 What about the police?

First impression?  The police were very calm and collected in the early stages.  Sticking heavily to unit numbers and occupying certain areas, streets, corridors, and subway stations.  A very relaxed vibe from all.  It was quite obvious the young conscripts were uneasy and nervous about everything.  I overheard quite a few relaying they did not want to be there and part of this, many have friends/family out there. 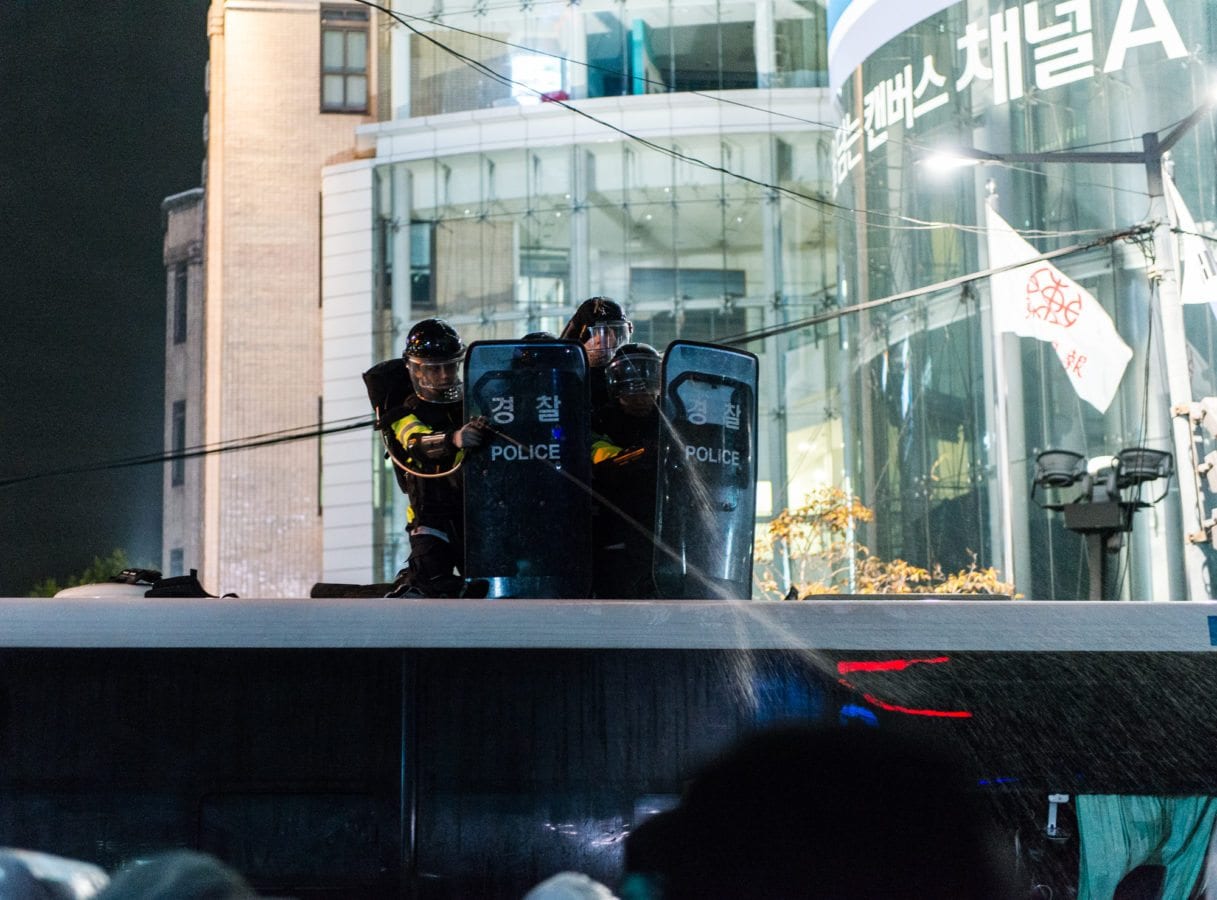 Did you meet many foreign journalists there? Did they remark on anything in particular?
Foreign media had a heavy presence on Saturday.  I saw outlets from all over.  I spoke with a handful between skirmishes and breaks.  They all seemed to remark on the usage of young conscripts for this kind of situation.  They noted the looks of fear and obvious inexperience these very young men have.  One relayed to me what he saw in regards to the older farmer being hit with the water cannon repeatedly while he was trying to be rescued. 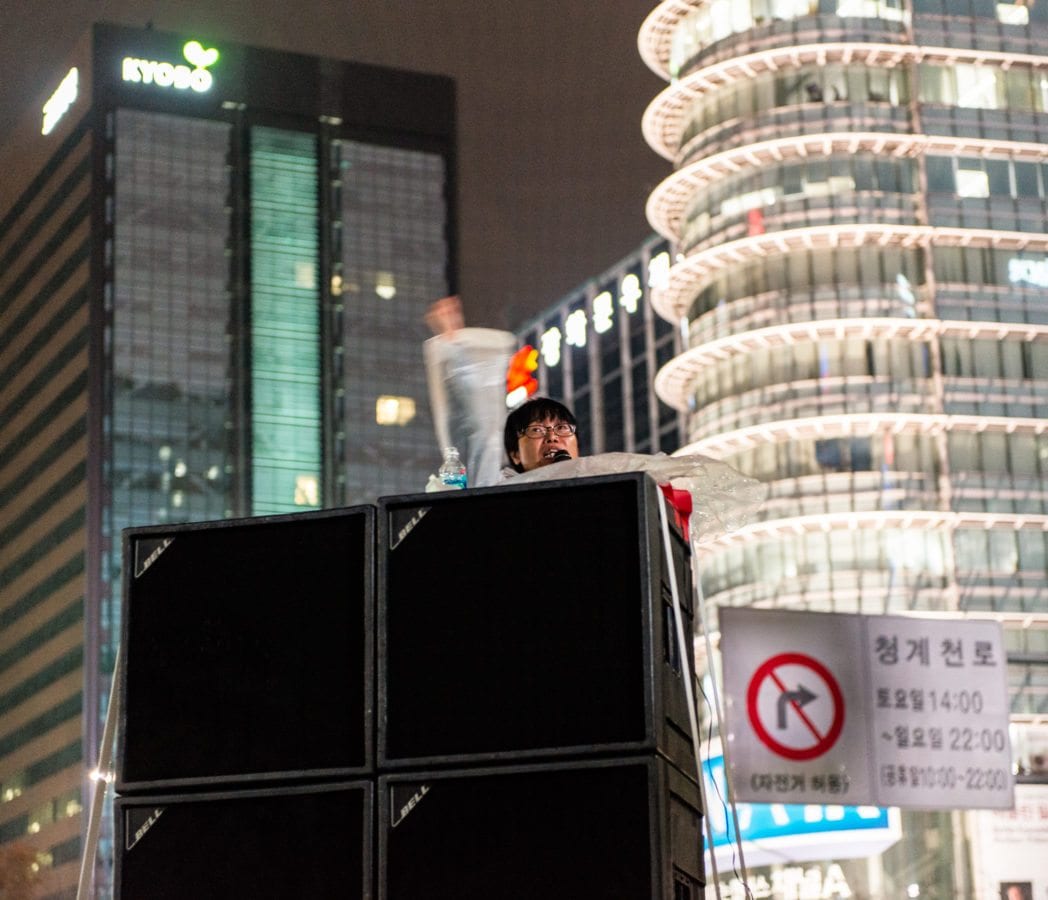