The 2013 Broadway’s Cinderella is reborn in Seoul.

The musical will be presented by some of the most talented local and expat actors, with a few new twists. The Camarata Music Company, the largest international non-profit music organization in Korea, has been preparing for the show since spring. Now is the time to act! 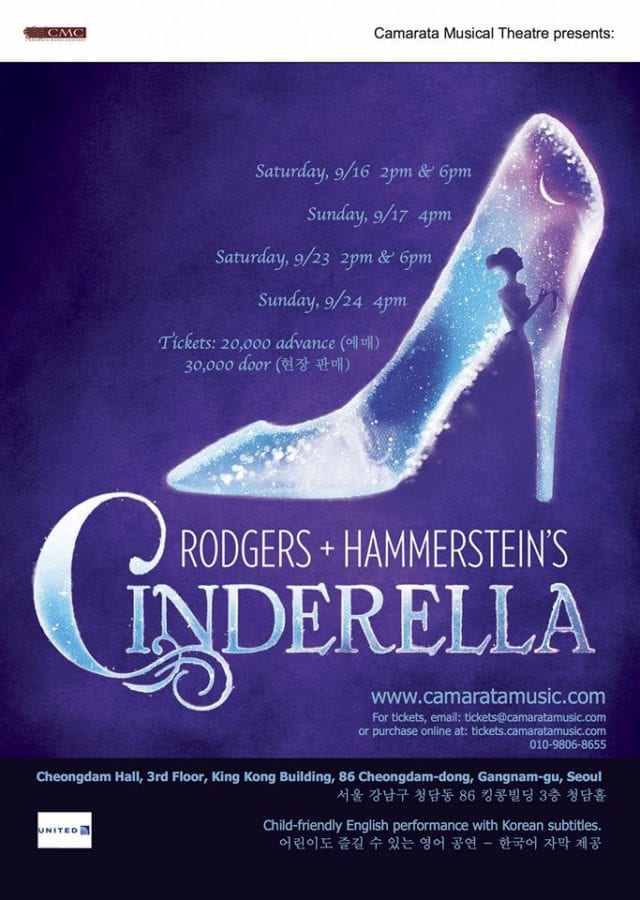 This version of Cinderella is slightly different from the well-known story that we are familiar with, which adds a bit of fun to this show. Cinderella takes off one of her glass slippers and leaves it on purpose. There’s even more to discover before the stroke of midnight turns a golden carriage back into a pumpkin.

The story is not just about a poor, pretty girl dreaming about the prince and getting married to him in the end. Ella is brave and curious about the world instead of accepting what is given to her. Of course, our fairy godmother helps Cinderella, but she is the one to make her own dream come true. Furthermore, Ella guides the prince to see what life is like outside the castle to help him realize his own dream of being a great king.

What about the prince? His situation is no better than Cinderella’s after his parents passed away. He might not have an evil family, but his advisor, Sebastian is as selfish as Cinderella’s stepmother. Even worse, Sebastian rules the kingdom at his will, neglecting the lower class and keeping the prince unaware of what’s going on in his kingdom. Doesn’t it remind you of Korea’s recent past? How did Broadway know? Like likes like. The prince refuses to see the world as it is shown to him. He keeps asking himself the meaning of his life and he struggles to find the answer like Truman does in The Truman Show.

A new character, Jean-Michel, is also one not to miss. This passionate revolutionary stands up for the poor and devotes himself to making a change for a cause. Given the recent political climate in Korea, this feisty rebel seems to be speaking directly to the Korean society with his lively melodies. Pointing out the corrupt system, Jean-Michel demands that the starving class’s voices be heard. Yes, it’s all about letting your true voice heard, whether it’s to fulfill your dream or it’s to make a better world.

This musical will surely be more than entertaining for kids. Elaine Snider, who plays the Fairy Godmother, says “It’s the most magical cast, and the show is awesome for kids!” Kids can let their imaginations come alive on the stage, and leave wishing for their own fairy godmother. However, this fantasy is not limited just to kids. Adults alike are invited to enjoy, as they will be brought back to their childhood days of magic and wonder.

While the scenery and costumes will catch your eye, the orchestra’s magnificent playing will capture your ears. The majestic orchestra resonating throughout the theater will pull at your heartstrings. This unforgettable music includes “In My Own Little Corner,” “Impossible,” “There’s Music in You,” and many other favorites from the original. Music Director Kayne Edwards says “It’s a great opportunity for expats to get immersed in the musical environment in Korea, and for Koreans to enjoy an intercultural production directed by local expats.”

The music will not leave you, but shows will! So, you’d better catch Cinderella before she runs away from the ball again!

Tickets are 20,000 won in advance, 30,000 won at the door and may be purchased prior to the event online at tickets.camaratamusic.com or via bank transfer to: Shinhan Bank 140-008-89378. After purchasing by bank transfer, you can send an email confirming purchase, attendance date and time to: tickets@camaratamusic.com

The Camarata Music Company provides collaborative performance opportunities for musicians of all talents and nationalities residing in Korea. They have been producing entertaining, family-favorite musicals such as Alice in Wonderland, Seussical, The Wizard of Oz, The Pirates of Penzance, and Oklahoma since 2010.