Raw meat. It’s not common, but neither is it unique to Korea since there are few parts of the world where it’s not enjoyed in some shape or form. Beef tartare dishes abound in Europe and have never lost their popularity. We’ve all heard the old joke of the unwitting tourist in France ordering steak tartare for the first time only to be horrified upon being served raw beef.
That said, I think I can safely choose yukhoe as my definite favorite in this family of foods. It’s basically a dish of thin strips of raw beef tossed with soy sauce, sesame oil and pear juice and served with pine nuts and slices of pear. As well as being ridiculously easy to make, it captures the real flavors and taste of Korea and has a distinct personality.
The thing that sets yukhoe apart for me is the pear. The sweetness and texture are perfectly matched with the other ingredients and give the dish an identity of its own. Pine nuts are another surprise. I had always classified them as an “Italian” ingredient never to be seen anywhere else, let alone Korea. The addition of gochujang (red pepper paste) gives it that unforgettable Korean heat.
There are several opinions on which cut of beef to use, with rump steak being the most commonly found, but if you decide to make this dish at home, the choice is yours. Tenderloin will give you a more delicate and softer texture, whereas sirloin, especially a well-marbled Hanwoo steak, has layers of fat running through the meat which provide a more assertive texture and taste.

Making this dish is easy as long as you make sure that your beef is absolutely fresh. I know some people put the beef in the freezer for a while to make it easier to cut, but this isn’t necessary unless you are writing a cookbook and need the dish to look picture-perfect. Koreans cut the beef in thin strips rather than dicing it into the small cubes you may be used to, but they still serve a raw quail egg on top just like their Western cousins.
I’ve heard that you can get this dish made with horsemeat in Japan, but I’ll leave that particular gastronomic treat for the braver souls among us. Koreans will sometimes use raw beef liver, tripe and other offal in the same way. I once tried this variant of yukhoe in a small restaurant close to Gyeongdong Market. As I recall, it took a lot of soju to digest the 1 cm square pieces of raw liver. Whatever the final cut, consider having a bottle of soju handy as the perfect complement for this tasty dish.

Directions
Cut the beef into 3 cm strips the size of matchsticks and toss with all the sauce ingredients.
On the serving plate arrange the crisp lettuce hearts, put the pear strips on top and finally add the beef mixture on top of that. Separate the egg yolk from the quail egg and put on top, Enjoy! 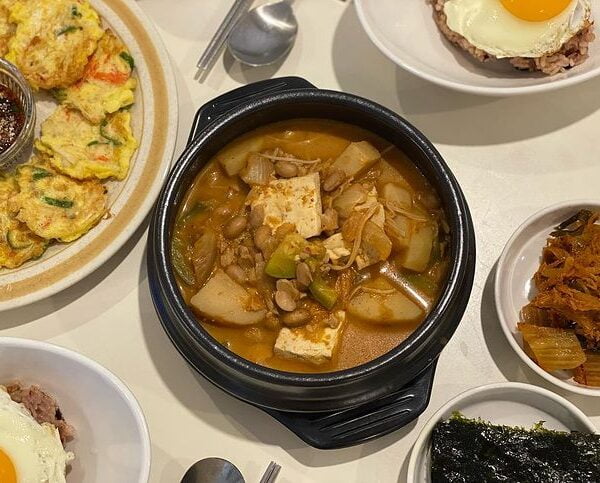 Yukhoe Jijon (육회지전)
The name of this restaurant could be translated as “the supreme beef tartare” and they’re definitely tops at distribution, with stores open in eastern Seoul, Bundang, Anyang, and Daejeon. Stick with the affordable Hanwoo yukhoe (W15,000) or live a little by trying the abalone yukhoe (W30,000), advertised provocatively as “a pretty daughter of the land bedded with a son of the sea.” Myeongil St. (line 5, ex. 2). 02-426-4866. Seolleung St. (line 2, ex. 1). 02-562-6464. A Korean can help you find the rest on the web.

Sinsa Yukhoe (신사육회)
Break away from the common herd with this classy establishment that’s quite unlike all the other chop shops out there. Try the yukhoe made with top quality Hanwoo beef at W25,000, or join a friend for the yukhoe and beef sashimi combo for W40,000. There’s even a bar here, great for throwing back a glass of sake as you chat. Head out of Sinsa St. (line 6, ex. 4) and go right, left, right, and left. It’s on your left. 02-512-4205

10 Tip: Rumor has it that Bulgogi Brothers, with locations in Seoul, Busan, Daegu, and Gyeonggi Province, serves up some mean yukhoe bibimbap.