Why Pojangmacha Street Food Is What You Need 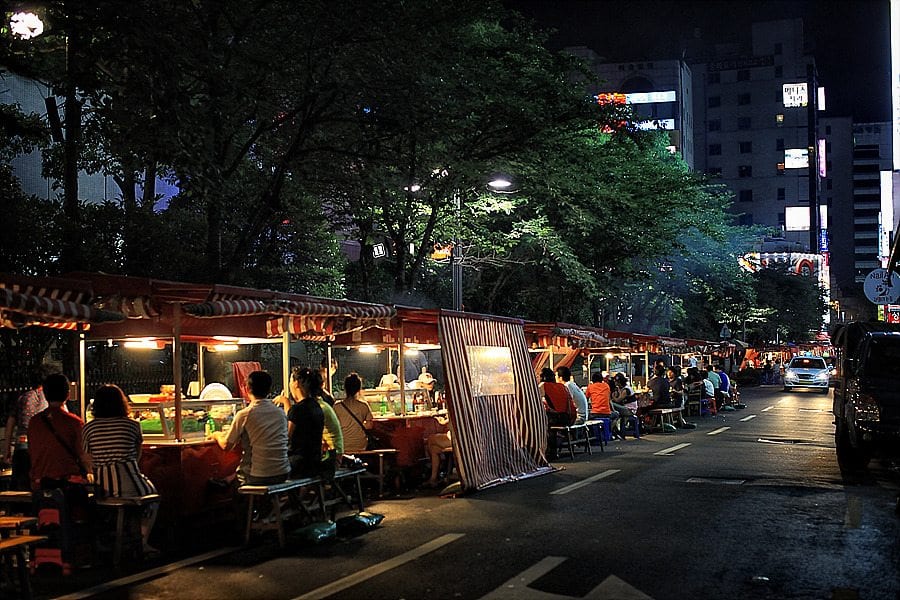 When I first arrived in Korea I often walked the back-streets of Daejeon in the frigid winter winds. I was intrigued to see rows of tents, clad in orange or blue-striped plastic with see-through plastic windows. Shivering, I peered through their plastic windows to see seats, tables, food, and people.

The people sat in groups with food and drinks, huddling around heaters against the cold outside. I longed to go in: The tents seemed to be oases in the winter, shelter from the snow, and islands of comfort. What were these mysterious places?

They were (and are) the famous pojangmacha of Korea, places where any traveler can stop, briefly or at length, for a bit of inexpensive food, a bracing drink and a convivial atmosphere. Pojangmacha (布帳馬車, “covered wagon”) are something like a restaurant on wheels, a movable bar, or maybe even a psychiatrist’s office. 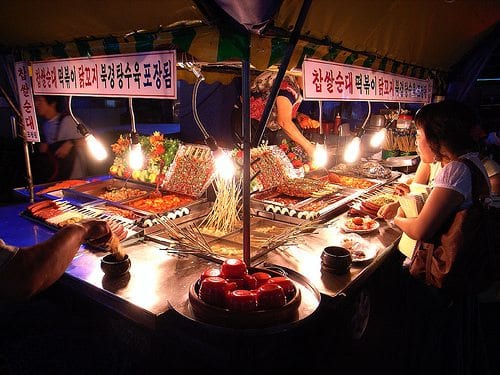 A quick glimpse at Korean television dramas reveals the continuing importance of the pojangmacha to Koreans: hardly a show goes by in which one character or another does not repair to the pojangmacha to hang out with friends or to drown their sorrows in a bottle of soju.

A pojangmacha can sometimes be confused by Westerners with a street food vendor or other food vendor working out of a tent. Don’t make this mistake. Koreans all know that a pojangmacha is a place you go to drink, and we’re not talking about juice here.

Today some places have even taken to calling themselves, indoor pojangmacha (실내포장마차), which have nothing to do with tents or carts. They’re essentially just bars, which have decided to adopt the name to in order to imply the inexpensive, casual atmosphere of the original version.

History Of The Great Pojangmacha

In one sense, pojangmacha are new: They have existed in Korea for fewer than 60 years. But in another sense, they carry on a long Korean tradition. For centuries, Korean peddlers provided goods, services and food by moving to where the customers were and not forcing their customers to come to them.

Pojangmacha are merely the latest manifestation of this type of Korean service; fast food and drink that is provided somewhere close to customers’ workplaces and homes.

Pojangamacha first began to spring up early in the 1950s in and around the Cheonggyecheon in Seoul. The first pojangmacha were quite different from their modern counterparts.

They were small cars and carts, exposed to the elements, which sold small snacks and drinks. Later, some clever merchants began to cover their carts with an orange tarp, provide stools to sit on, and sell small appetizers.

This eventually became the norm, with a tent containing a small cart and a handful of stools to sit on.

As time went by pojangmacha began to get larger and to feature tables. In the 1970s pojangmacha flourished in Seoul as the palli-palli (“hurry up”) culture of Korea kept Koreans at work late.

As Seoulites streamed out of work, they stopped at a pojangmacha for a quick drink and a bite to eat. Pojanchmacha menus have become increasingly diverse and the seating became even more comfortable.

Since just before the turn of the century, pojangmacha have undergone a major evolution. In areas like Jongno in Seoul, pojangmacha now offer extensive menus and there are even some with table service, an idea that was never envisioned by the creators of the original pojangmacha.

Some pojangmacha in Jongno and other areas now offer set menus, with a combination of individual snacks put together in one plate.

These inexpensive sets (as low as W2,000) feature traditional Korean food such as gimbap (rice rolls), tteokbokki (rice cake in pepper sauce) and sundae (Korean blood sausage). In addition, pojangmacha have begun to specialize, meaning that with a bit of research you can now find a much wider range of foods.

Finally, in a pojangmacha-esque improvisation, some restaurant owners tack on an orange tented section to the front of their establishments to keep out the winter cold.

The next time you’re wandering the streets of your city or town and feeling a bit thirsty or peckish—just look for that flash of orange plastic.

Inside you will find a remarkable array of food and a simple but potent range of alcohol. If you don’t speak Korean, don’t worry: everything should be laid out on the cart and you can simply point to the food you want prepared.

Stepping through the door for the first time can be daunting, but once inside, you’ll find the slight risk is worth it!

The Rules of Intoxication

If you’re drinking in a pojangmacha, remember the rules of Korean drinking etiquette.

It won’t surprise anyone who has been in Korea to discover that the main beverage consumed in pojangmacha is soju.

In addition to this beverage of choice, beer and makgeolli (rice beer) are also commonly sold. Other drinks are available, but these three are the holy trinity.

As pojangmacha have evolved, so have their menus, but there are some traditional favorites that have proven too popular to change.

The first seven are typical dishes that have been served for several decades and are still common today with some fading away, these are the OG’s of the pajangmacha. The final three items, more recent additions to the scene, are also much more accessible for most Westerners.

Think of dalkbal as the Korean version of buffalo wings: hot, spicy, and chewy. The bones are usually removed from the feet, which are then boiled in soy sauce. Be warned: even folks who can handle spicy food may quail at these. 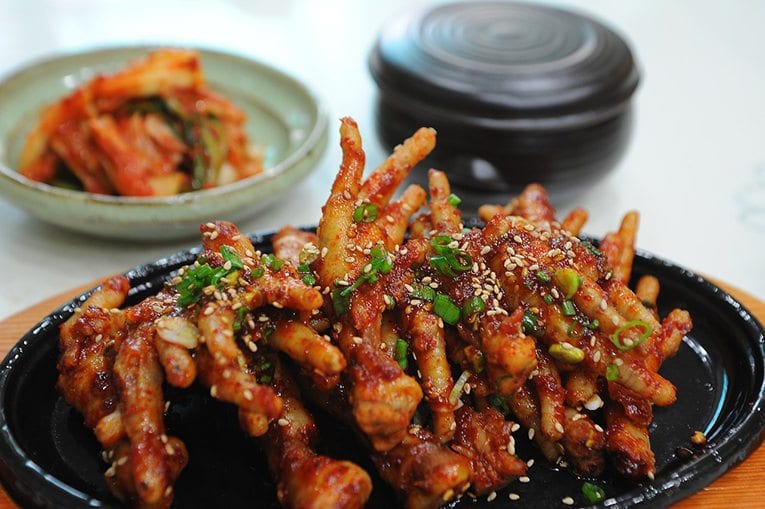 Hagfish is one of the most famous dishes that accompany soju. They’re typically grilled on a charcoal fire and served with vegetables including red and green peppers. It’s supposed to be good for “stamina.”

These tasty deep fried veggies have a softer coating then regular deep fried food, they also go well with Makgeolli.

These are two distinct types of squid, but we can’t tell the difference. They’re served with salt in sesame oil or with gochujang (red-pepper sauce).

Made from fish and wheat flour and served on long wooden sticks or in soup. 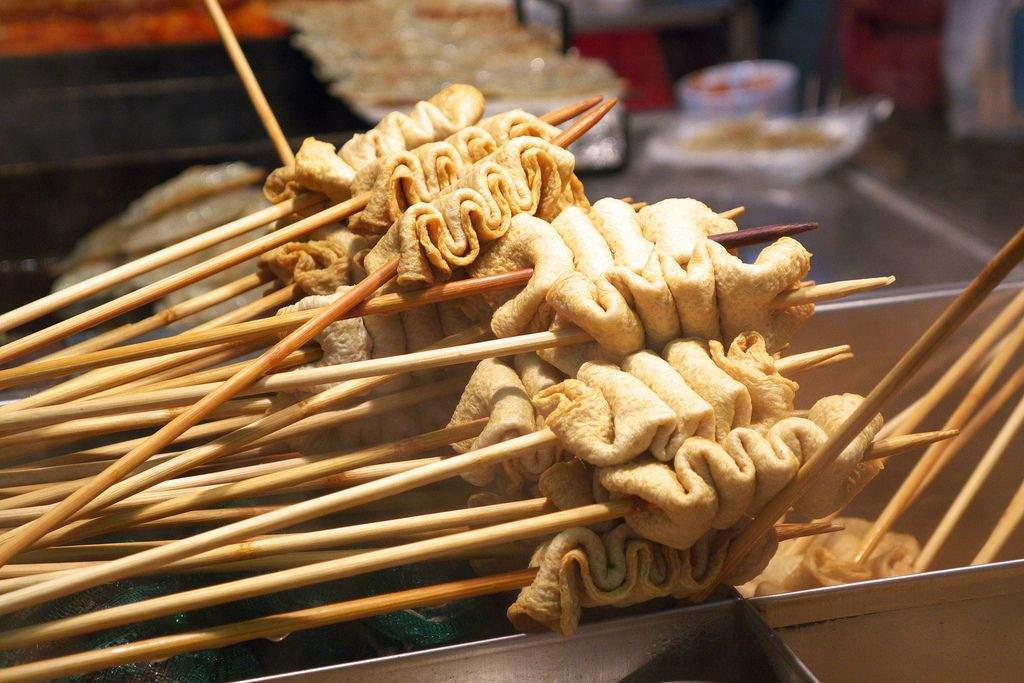 Pig intestines are filled with chopped vegetables, glass noodles and pig’s blood and served salted with liver slices. If that sounds like a bit much, try to think of sundae as the Korean version of haggis.

This is pretty close to a Western omelette, and if you are accompanied by a picky eater, or one who doesn’t like spicy food, this along with odeng is the safest choice.

This can be a tad spicy for the cooler palate, though it doesn’t hold a candle to the chicken feet (above).

An extremely popular dish, the cool soft taste of the tofu matches extremely well with the spicier kimchi. The tofu can be a challenge for the chopstick-impaired.

Over recent years the pojangmacha stalls have started to adapt to the changing palate of the younger generation. Crazier street has started to pop up to keep the street food popular, here are a few examples of things you might find today at a pojangmacha, most revolve around hotdogs..

A corndog surrounded by a massive glob of french fries deep fried. What’s not to love about that?

Pretty self explanatory, another food creation i’m pretty sure everyone has made or wanted to make at 3:00am.

This is a hotdog on a stick with a spiral of potato. Usually you would just get the potato wrapped around the stick but these guys upgraded and stuck, once again, a hotdog in the middle. 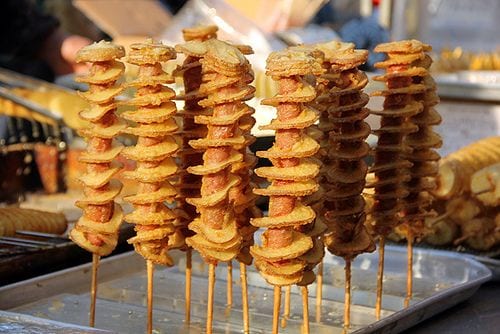 In general, you can wander around Jongno, Euljiro, Namdaemun, Guro Digital Complex and Dongdaemun areas. For particular dishes, see the list below.

Cross the Cheonggyecheon bridge, make a left turn, and go straight 200 m till the Suhyeop Bank (수협) alley on your right.

Behind the old City Market, near the Daejeon train station. These are old-school pojangamacha.

In winter, try the backstreets downtown.

These pojangmacha are found in the downtown area near the train station.

Take a cab, ask for Daegu Bank near Bulgogi Alley.