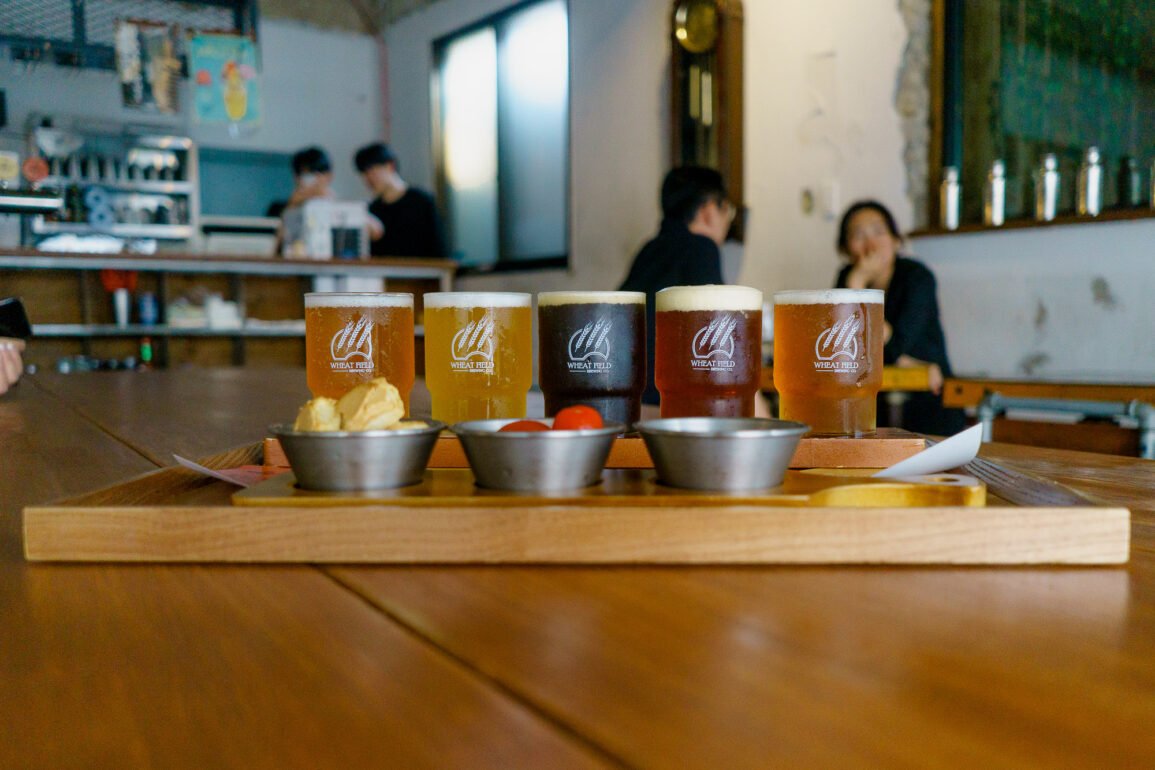 I am an unashamed beer snob, I’ll admit. No, snob is perhaps a little too harsh. Let’s rather say that I’m a discerning beer drinker. As ubiquitous as big-name beer might be, I often turn up my nose at the choices on offer. Too gassy, too diluted, too predictable — sometimes I crave the more refined profiles that only craft beer can offer.

I’d known that South Korea had establishments which catered to more discerning palates like mine, although these are few and far between. And so my quest for a better brew began. On scouring the internet for the foremost craft beer joints in my vicinity of Gwangju in Jeollanam-do, two names kept on popping up; Wheat Field (a brewery at the Songjeong Market) and Afterworks (going under the Mudeung Brewery name based in Dongmyeongdong). Unfortunately the latter is in the process of changing ownership, but I recently took some time to stop by Wheat Field and chat all things craft beer with manager Gwon Soonho (권순호).

Set in the 1913 Songjeong Market, Wheat Field has a compact selection of quality craft brews, with a tasting menu consisting of two pilsners and three ales. Personally I enjoy a crisp lager with a bit of kick at the end — something that Japanese beers do particularly well. That said, I was certainly more inclined to the signature Wheat Field Pilsner, but the more fruity and playful ales weren’t too far off the mark.

According to Soonho, the Golden Ale ranks as the most popular on the menu, and it’s easy to taste why. It’s an easy-drinking, well-balanced brew without being too outlandish on the taste scale. Another pleasant surprise was the Wheat Field Dunkel: a brown pilsner with rich, dark notes of coffee and toffee. Despite appearing like a stout, this too, went down a treat. The Wheat Field IPA and Weizen are definitely more fruity and playful than their menu-mates, a treat for more adventurous craft beer drinkers.

If you’re new to craft beer or you’re just overwhelmed by the selection on offer, here’s a quick primer to help you.

Ale: Ales are generally quicker to brew than lagers, due to their warmer fermentation temperatures (from 15 to 25 degrees Celsius). This lends them the label of “top-fermenting” yeasts due to the manner in which the yeast rises to the top of the tank during the brewing process. Ale yeasts are known for their varied flavor profiles, with variants such as IPAs (India Pale Ales), stouts, and wheat beers (AKA weizen).

Lager: Lager yeast ferments at lower temperatures than ales, ranging from 7 to 15 degrees Celsius. Lagers are known as “bottom fermenting” yeasts, due to the sinking of the yeast to the bottom of the tank during the brewing process. Variants include pilsners, dunkels (dark beers), and bocks. The flavor profiles are generally not as complex as ales, with a crisper “bite” and occasional aftertaste. Interestingly enough, the word “lager” is derived from the German word “lagern,” meaning “to store” – a clear reference to the time it takes to brew a quality lager.

There is no doubt that the craft beer industry has been affected by the coronavirus crisis. As Soonho explains, the premium price point of craft beer compared to regular beer, along with Covid-19, has meant that breweries like Wheat Field have seen a noticeable dip in clientele. With outbreaks seemingly under control, he hopes that customers will once again flock to the watering hole.

Further into our chat, Soonho reveals some insights into the rise of craft beer culture and how a new generation of craft drinkers is driving demand for certain brews. Older people prefer lagers, while younger clients prefer ales. Given that the introduction of craft beer is a relatively recent development, this upshot in more exotic ale-based beer tastes among younger drinkers makes sense.

At almost five years old, Wheat Field is certainly one of the craft brewing pioneers, at least in the Jeolla province. With other outlets coming to the fore, craft beer drinkers have more choice when it comes to picking out their golden effervescence. Larger cities are spoiled for choice when it comes to craft beer establishments but despite this, it is reassuring to know that beer fanatics are catered for all around the country.