The Lotteria Ramen Burger in Korea

The Lotteria Ramen Burger in Korea 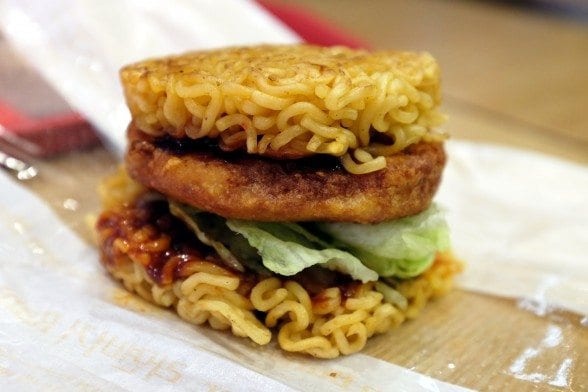 The multinational fast food corporation Lotteria launched their “ramen (ramyun) burger” in South Korea on January 6th, 2015 much to the anticipation of a few people. While the ramen burger is not a new development in the world of food, venturing down to your local Lotteria franchise, one will find a poster proudly pasted to the window of a chicken patty sandwiched between two “ramen buns” for a limited time only. Served up in a wrapping with a fun display window, the burgers themselves are not much larger than a big ball of jumokbap. Once the wrapper is peeled back, it becomes apparent that the noodles have not been cooked until crispy and, though they are not soggy, only have a tentative hold on their shape. The burger is essentially a grilled chicken circle, lettuce, onions, spicy gochujang sauce, and the ramen noodles. It tastes exactly how it sounds, and after the first few bites, it becomes a bit difficult to eat as the noodles begin to fall apart like… well, like noodles.

Lotteria Japan had their own ramen-themed sandwich back in 2013 for a limited run and was met with mixed reviews. However, their ramen burger included a handful of ramen noodles sandwiched between a normal bun.

In the end though, the Lotteria Ramen Burger is a fun, tasty bite that could make your next fast food excursion diverge from the normal burgers and fries that you always get and bring a bit of noodley excitement to your day.