The Growing Popularity of Stand-Up Comedy in Korea 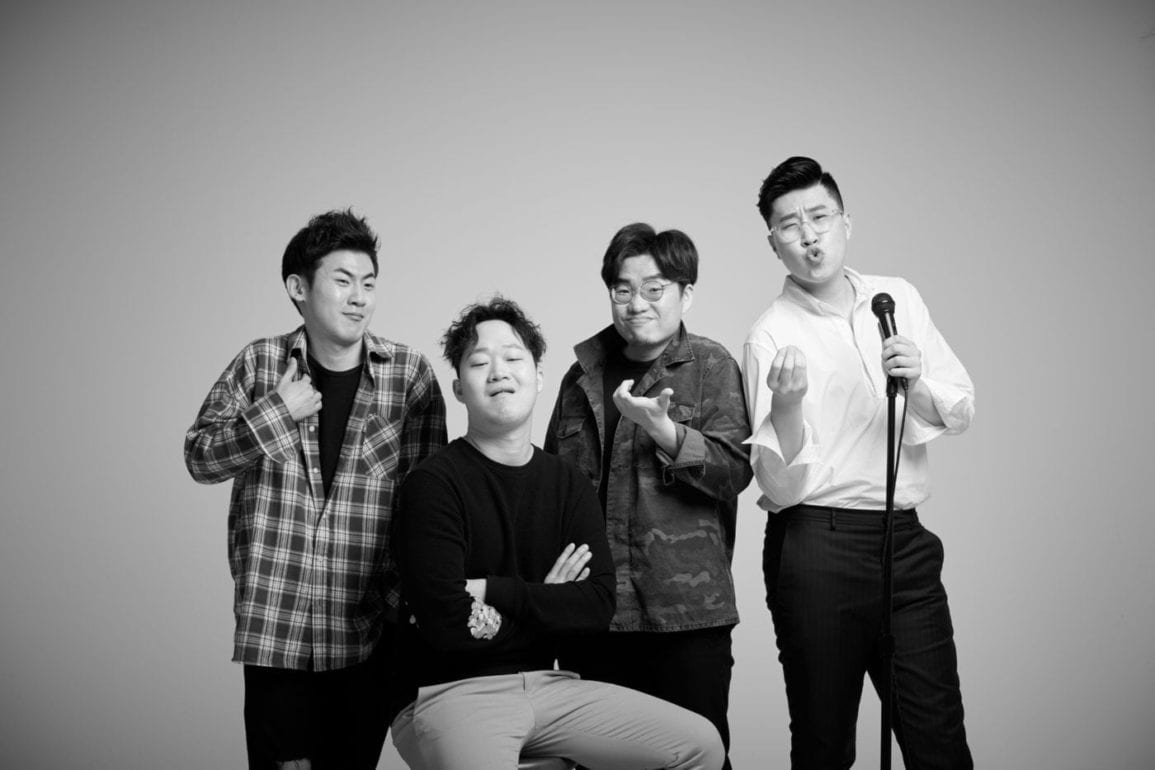 Since last November, a small but growing numbers of Koreans have been turning up every Thursday night to see stand-up comedy at a small basement bar in Hongdae.

Lee Yong-joo (33) and Jung Jae-hyeong (31) are veterans of the sketch comedy shows that have dominated the Korean comedy industry for decades. Last year, they decided to create a weekly comedy night that featured both professional comics and amateurs. The show has gained increasing popularity since its launch 8 months ago, and both creators attribute the success to the freedom and flexibility that the form of stand-up can provide. 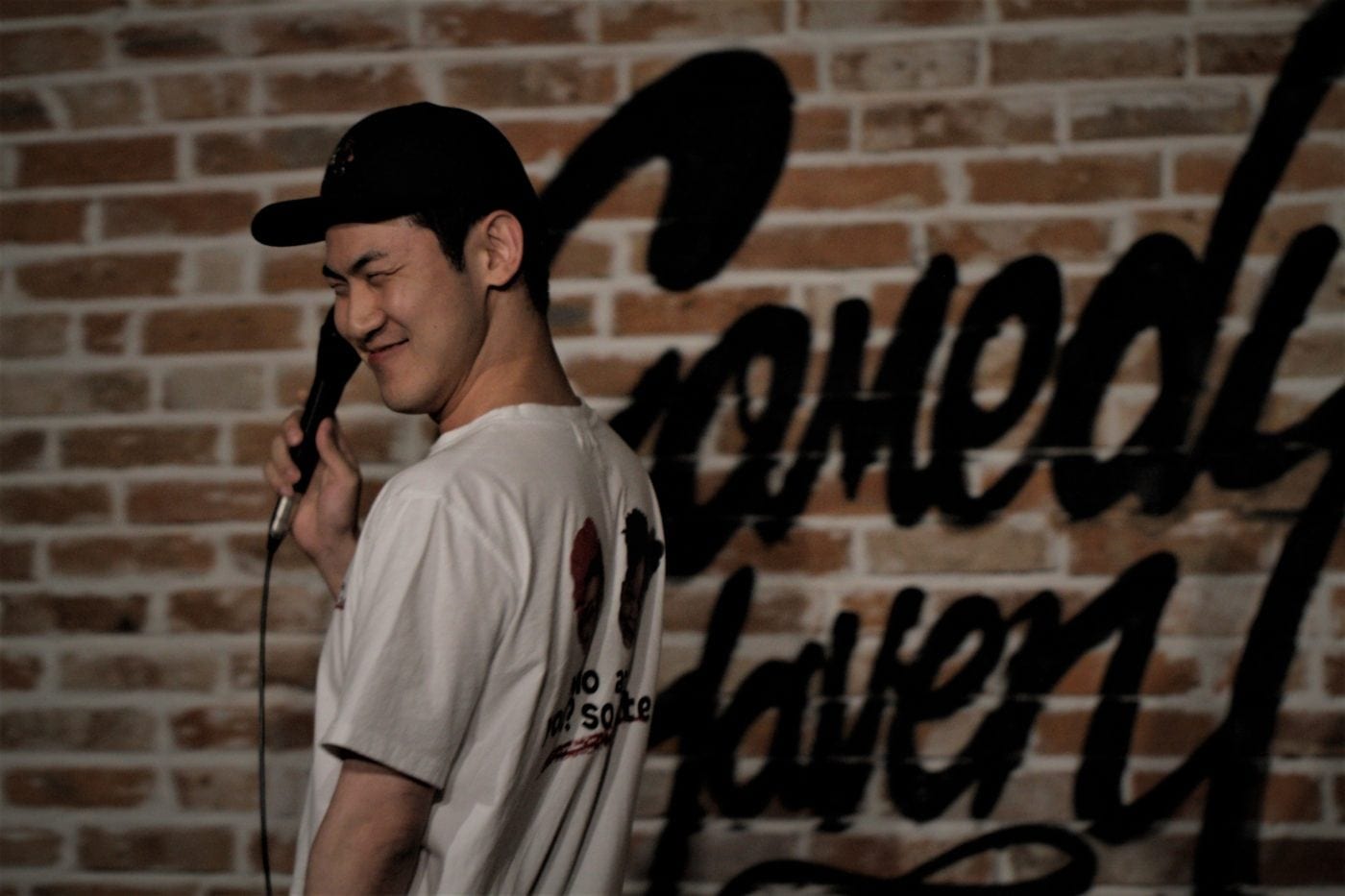 “I have great respect for the sketch comedy tradition,” says Lee, “but with stand-up, I can be more expressive.” Jung echoed similar sentiments adding, “Stand-up allows me to draw attention to issues in a way that the sketch comedy shows can’t.” The show’s steady draws indicate that a fair number of Koreans feel the same way.

The fact that there are stand-up comics in Korea at all is indicative of the country’s changing culture and an encouraging sign for a young democracy whose population has become more outspoken over the years. South Korea seems to be increasingly embracing values like a participatory government and the rule of law even as many parts of the world seem to be moving away from these principles.

The last two Korean presidential elections saw dramatic upticks in young voter turnout. Last year the nation used the legal system to peacefully remove and convict ex-President Park Geun-hye, a development that would have been impossible to imagine a mere ten years ago. The outgrowth of young stand-up comics who want to grab a mic and bring relevant issues front and center seems like a natural next step in a country where freedom of expression is on the rise.

This is in stark contrast to the country’s post-war past; Korea’s history of military rulers who regulated television stations and silenced critics was a definite deterrent to the maturation of stand-up in the country up until recently. Performers in the 1980’s, like Kim Hyeong-gon, who attempted to use stand-up to tackle issues such as political corruption were banned from the airways. The entertainment business developed under these repressive regimes, producing an industry in which everything was controlled by large entertainment agencies and broadcast companies that produced, for the most part, uncritical slapstick sketch comedy shows that refused to touch on controversial issues. 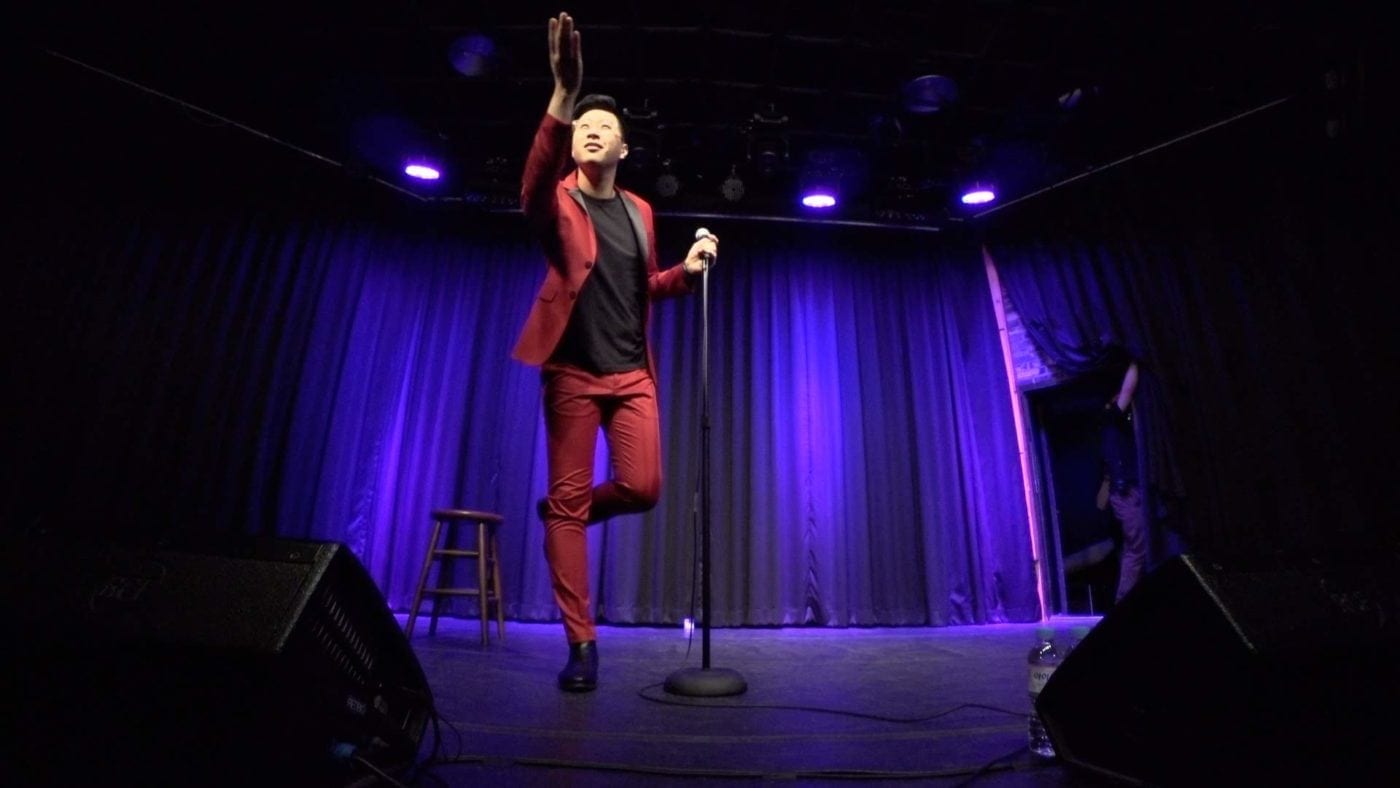 By the time democratic presidents like Kim Dae-jung came to power in the 1990’s, stand-up was mostly forgotten as even an option for Korean comedians to explore.

But things have changed since the twentieth century. Korea has enjoyed easy access to the internet for over two decades now, which has in turn exposed younger Koreans to a much wider range of cultural influences than their grandparents had. YouTube and Netflix collectively offer hundreds of Western stand-up shows with Korean subtitles (Lee and Jung cite Western comics like Louis C.K. and Kevin Hart as their personal favorites), and younger Koreans have been living and traveling abroad in large numbers for years now – returning with Western ideas of freedom of expression and novel concepts of comedy. All of these factors have compounded to create fertile ground in which stand-up comedy might one day flourish in Korea.

Lee and Jung both cite “Black Comedy,” a Netflix special by Yoo Byeong-jae, as having planted the stand-up comedy seed in this new garden of sorts. Since its release last July, YouTube clips of the show have garnered over three million views. Lee and Jung say the show has an impetus for their project. 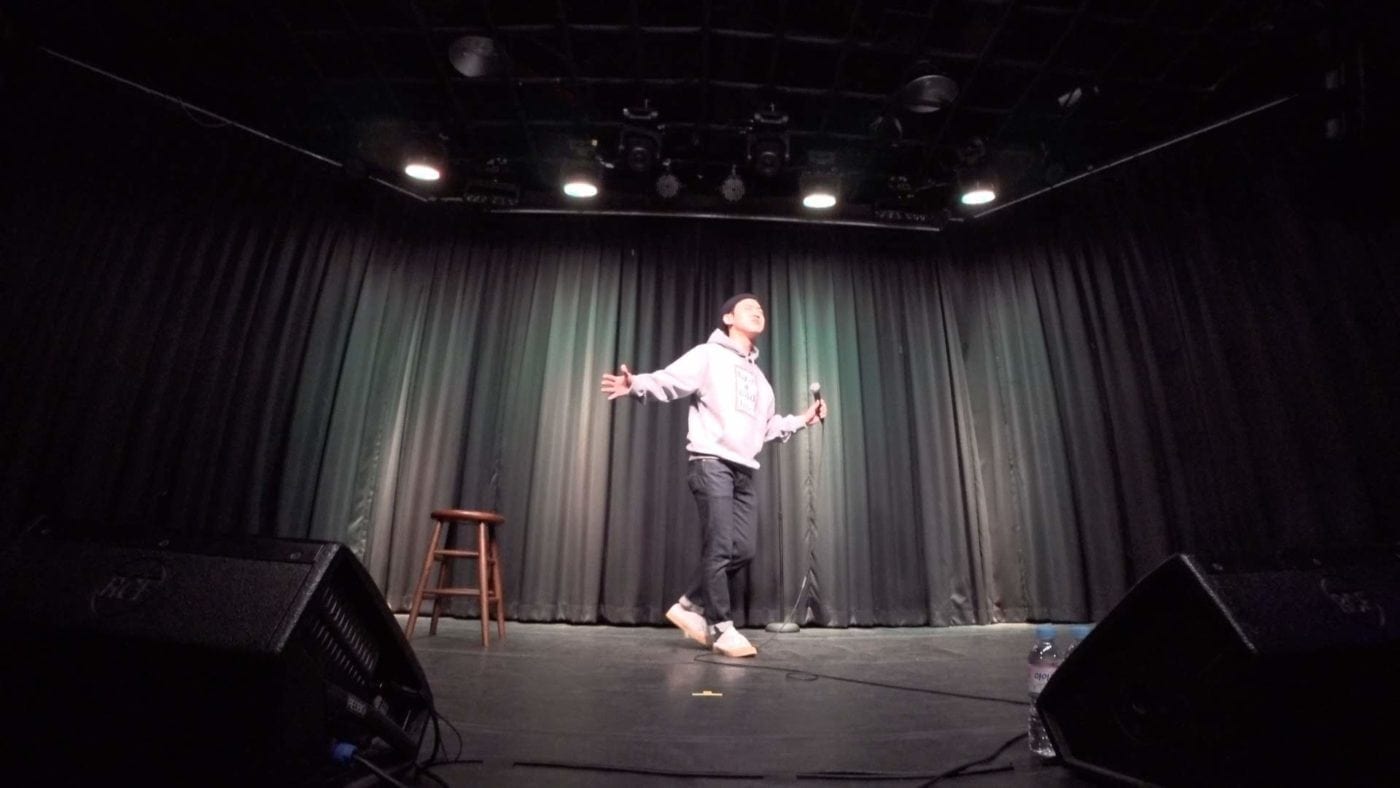 Both Lee and Jung see a fresh opportunity for the coming of age of stand-up in Korea after the success of Yoo’s “Black Comedy.” However, they also understand that because of Korea’s strict broadcasting regulations, cultivating the grounds for stand-up in the country will take a lot of work.

They remain optimistic, however. Whereas both Lee and Jung acknowledge that there are quite a few topics that are still off limits with Korean audiences, they also believe that the very act of doing away with the abstraction of sketch comedy and commenting on life to a room full of strangers head-on is a rebellion against the old guard.

Park Cheol-hyeon (27), a veteran of the Hongdae show, expresses similar reservations about the limited comedy field in Korea and appreciates the freedom of the stand-up format. Since he was a teenager, Park has watched Western stand-up comics like Dave Chappelle and Ali Wong online and believes that the form is “a good way to speak to social issues.”

However, he also understands the scale of the work that has to be done to legitimize stand-up in Korea. Park has done stand-up for almost two years now, sharpening his act and trying new material. He does not have a day job but instead devotes himself full-time to stand-up comedy. Like many comics, his material touches on and pokes fun at social issues in the country.

The idea of using stand-up as a vehicle for discussing important issues resonates just as deeply with Oh Dae-hyeon (28), who this summer will open “Comedy Haven,” Korea’s first stand-up comedy club in Gangnam. Having performed at the Hongdae show in the past, Oh says that he sees an increasing interest in stand-up among Koreans. 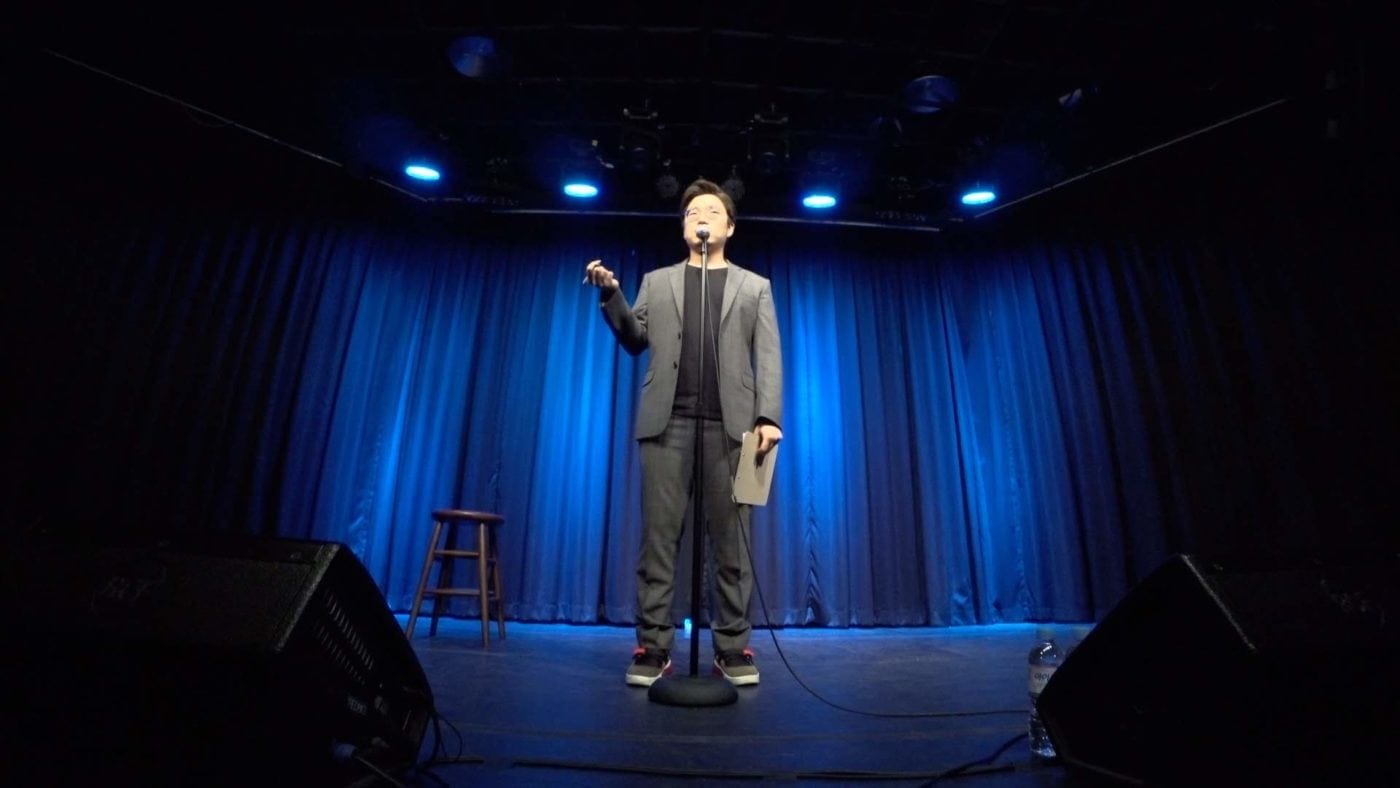 Having grown up in Chicago, Oh believes that comedic talent here needs to be cultivated outside the rigid boundaries of Korea’s broadcast and entertainment industry, which at its current state leaves little room for artists to have a creative say in their own productions. A club circuit, as opposed to a rigid broadcasting company, is a much better system for developing stand-up as a viable art form in Korea in Oh’s opinion.

“There needs to be an infrastructure,” Oh says, “a place where young comics can learn their chops and hone their skills organically.” The opening of a comedy club in Korea is, in Oh’s opinion, an essential step in ensuring a stable environment where artists and audiences have a say in the comedy making process.

Park said this of standup in Korea: “There is a wave coming. I don’t know how big it will be or how long it will last, but it’s coming.” Whether or not standup becomes a permanent fixture here will depend on a lot of things that are difficult to predict. Will the entertainment industry get involved? How comfortable will audiences be with controversial topics? Who will invest in venues? Regardless of these challenges, the potential of a movement toward self-expression and creativity, at a time when the future on the peninsula is uncertain, is welcome news.