A Taste of Korea: When Barley Met Rice Boribap 보리밥 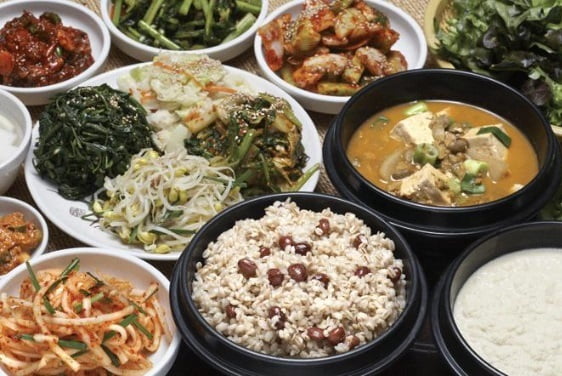 In a country where so many dishes are claimed to either ensure your “well being” or endow you with mystical powers of virility, boribap has its own special place as the healthy option.

It’s safe to say I’ll never be described as a health food nut, so those who know me may be surprised by this month’s featured dish. Boribap is essentially a dish of steamed rice and barley that is often served with doenjang jjigae or doenjangguk (similar to Japan’s miso soup) and assorted banchan (side dishes).
Rice, of course, has long been at the core of Korean cuisine, but back in leaner times, it wasn’t always in plentiful supply. During periods when the rice allocation was strictly controlled, other grains including barley were added to the rice to give it volume. Boribap has come from this less-than-glamorous background to become a popular cuisine of its own.

While cooking this rice-and-barley combination, the ratio of each is a matter of personal taste, but barley should be in greater proportion to keep the dish authentic. Barley takes a little longer to cook than the rice so it can be parboiled before being added to the rice pot. The rice starch will help keep the whole mix together when cooked.

Again, what to serve on the side is a matter of choice, but doenjangguk is the most well-known. When I first tried it, the boribap was served almost like a version of bibimbap with a lot of greens and sprouts added to the barley and mixed together with gochujang (red pepper paste) Naturally, kimchi makes an appearance along with whatever namul (greens) the restaurant has made that day. You’ll also find grilled fish and meat at some places.

As one of the highlights of my time in Korea, I was served a small dish of boribap at an amazing temple cuisine dinner in Suwon last year. Buddhist monks have apparently made this vegetarian dish their own by adding plants and herbs from the mountains to the barley rice. In fact, the city of Suwon actually served 2,010 portions of boribap cooked at once in a huge pan as part of one of their annual festivals. Who said vegetarian food was just a passing trend?

This restaurant specializes in boiled barley and provides cheonggukjang along with eight side dishes made from fresh veggies. Finish up your meal with sungnyung (숭늉), a soup made of the burned rice (and barley) at the bottom of the bowl.
1064-6 Gyesan 3-dong, Gyeyang-gu, Incheon. borigol.co.kr 032-544-1101

Experience the traditional flavors of Jeolla Province at this boribap restaurant. The barley is served first, and nearly twenty side dishes follow. Mix the boiled barley with bossam for the perfect combination.

Looking for an inexpensive buffet where you can enjoy hefty servings of healthy boiled barley with a wide variety of side dishes? This is the place to go.