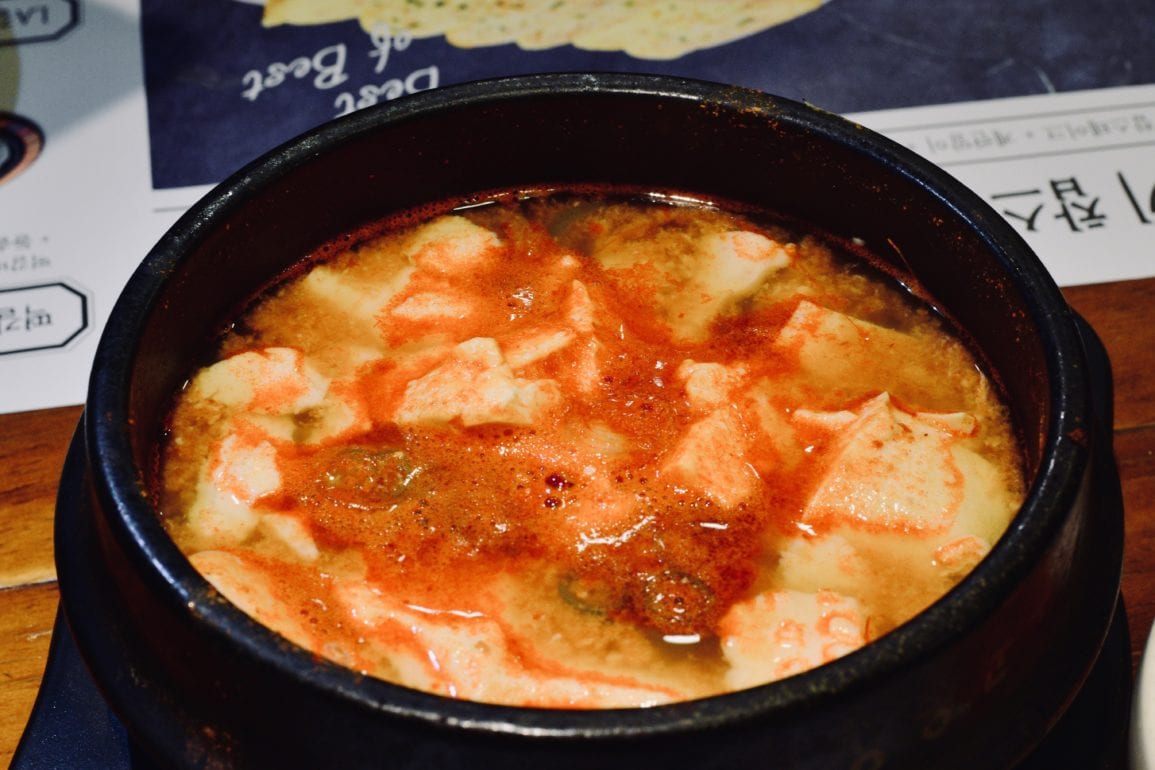 I’ve got to admit it: sundubu jjigae (soft tofu stew) was my entrance into the world of Korean cuisine. Initially a lot of jjigaes downright scared me as I was never quite sure what surprise was lurking below the surface of the stew. This dish, however, was soon on my list of good eats as it contained two of my favorite things, pork and clams. It actually reminded me of the Portuguese dish that I had tried years ago on a European tour. It’s surprisingly similar in ingredients and concept. They even use red chili flakes in Portugal, but of course no tofu.

Basically, sundubu jjigae is a simple spicy stew made with soft uncoagulated tofu. This tofu is produced without being pressed fully to remove the water, thus forming the block that is known as soft tofu  in the United States. Tofu by nature is one of the food world’s blank canvases, with no dominant taste or smell of its own. It simply absorbs whatever it is introduced to. Despite having a bad rap since the California “tofu burger” vegetarian era of the 70s, it is of course a staple of many Asian cuisines, and Korea is no exception.

Sundubu can vary with the region. In Gangneung on the east coast of Korea, for example, sundubu is made with seawater to give it a salty flavor. There’s even an entire village (Chodang-dong) dedicated to serving versions of this local delicacy.

As with many Korean dishes, there seems no right or wrong way to make sundubu jjigae so long as the basic ingredients are the same: tofu, clams and red-pepper powder (gochugaru). For novice Korean cooks, it is a beautifully simple dish to make at home. Like most rustic dishes around the world, the quality of the basic ingredients is what makes the dish.

In the case of sundubu jjigae, the stock has to be rich and full-bodied or you will end up with a watery stew. The Korean red pepper flakes are beautifully perfumed with a red pepper aroma and flavor quite unlike their overseas cousins, giving the jjigae a rich base flavor, not to mention spiciness. Use as much or as little as you like.

Here is a basic and foolproof recipe for adventurous souls who want to try their hand at sundubu jjigae. What I find interesting is that Koreans often put the ingredients into the pan and then turn up the heat, while I am used to adding the ingredients to an already heated pan. Either way, be sure to release the flavors of the pork before finishing the dish. The final addition of a raw egg on top is a surefire way to recognize this dish.

1.  Combine gochugaru, minced garlic, pork and cooking oil. Mix well and put in a large pot.
2.  Cook for approximately 3-4 minutes and then add the clams.
3.  Put the tofu on top and add the stock. Simmer over low heat for 5 minutes.
4.  Add the green onion and mushrooms, check the seasoning for salt. Simmer for 1 more minute.
5.  Remove from heat and crack in the raw egg just before serving so that the egg is cooked by the hot stew.
6.  Serve with plain steamed white rice. Serves 2.

Sundubu Is Served
by David Carruth

Nationwide
Start your sundubu jjigae journey at Kongmiga, literally meaning soybean beautiful house.Drawing upon three generations of homemade soybean cuisine, Kongmiga is a great choice not only for sundubu jjigae but also other related dishes like seafood tofu jjigae and cheonggukjang. The original store started in 1995 near Suwon City Hall in Gweonseon-gu (031-206-5004), but it has since expanded into a nationwide chain. To find the closest location, call their toll-free customer service line at 080-333-0031.

Gyeongsang Province
Gyeongju’ s famous for Seokguram Grotto, Bulguksa Temple, and also this unassuming restaurant that happens to be a famous place to try sundubu jjigae. Maetdol Sundubu didn’t start in the Silla Dynasty like a lot of the relics in this former capital, but it does cater to hungry travelers taking a break from sight-seeing. The main (and only) dish here is quite reasonable at W7,000. Find it by Bomun Lake on the east edge of the city.

If you’re curious about other dishes made with sundubu, try out this popular stop on a street lined with other sundubu restaurants. Recommendations include the sundubu set menu and the sundubu jeongol. Across from the Seorak Pine Resort west of Sokcho.