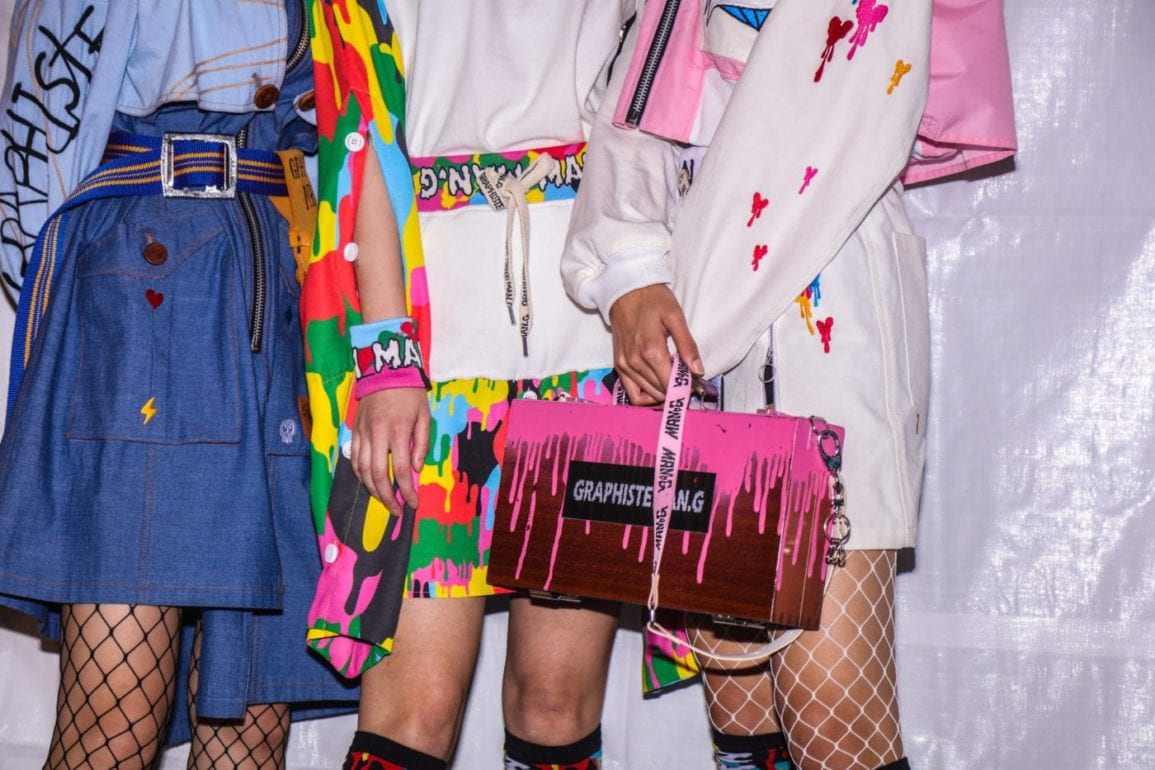 Every year, Korean designers showcase their newest collection in Seoul Fashion Week. With the social and political climate of South Korea and North Korea being at it’s best in history, some Korean designers are sending a message out to the world about peace, future generations, and the identity of the youth.  The following designers showcased an exceptional representation of social and political topics in modern day Korea.

The use of soft and vibrant colors throughout Ti designs explored new styles that made the wearer stand out. Combined with a strong emphasis on recycling and conservation, the designs symbolized the beauty of the Earth and hope for environmental awareness. The natural colors of green, blue, and shades of purple were used throughout the designs to emulate the soft tones found throughout nature. During the final walk, the designs showcased custom recycled bags full of ferns and houseplants, wearing the phrase, “Please Save My Earth”. The Greenery was directly used as a symbol of peace and the abundance life. Instead of featuring typical handbags, Ti featured recycled bags that symbolized the process of trying to make Earth a little greener with each step.

The soft music throughout A.Bell’s show set the tone for the clothing. The neutral colors were abundant, along with loose and flowing fabrics. The garments were wearable, yet freeing. The clothes directly represented freedom and comfort, aligning with South Korea’s hope for unification one day. The shapes were functional, but also fashionable, and the minute details added a twist, quite literally, to the garments one typically finds. A.Bell did not directly state the idea of peace in Korea, but instead the tailoring and the attention to detail brought the viewer to peace. The designs were very sophisticated and delicate, almost as if they were speaking directly to the North and South Korean relationship.

Graphiste Man.G’s set the tone for the show as a younger and more DIY production featuring looks resembling a clash of the Americana style of tattooing by Ed Hardy, and a painter after a hard days work. The show was done in an untraditional way, with the models often skipping and spinning down the catwalk. Youthful, big smiles adorned their faces, leaving a feeling of bliss and the burning passion of youth floating in the room. Graphiste Man.G’s collection did not adhere to the much-used traditions of the  but instead created their own bold vision of a youthful future. The constant use of old-school hearts and splatter paint was reminiscent of youthful fashion. In addition, the oversized clothing contrasted the sharp and well-fitted suits that usually flood the runway.  This collection was the direct response to the old and conservative ways of fashion. Man G re-introduced the vibrant and unique youthful twist that resonates the youth of Korea.

Ul:Kin traced its roots to emerging artists. The designs make a high-end, yet casual line that seamlessly blends art and culture into fashion. This collection presented a new, but still wearable style, that is able to fit in with everyday wear and life. There were a lot of experimental silhouettes, mixed with a 90’s neon vibe. The backdrop of the show was looping video of the surface of the ocean, viewed from below, representing the new identity and emerging style Ul:Kin shows so well. Ul:Kin as a brand, prides itself in reusing thrown away painting of young artists to recycle and give value to art as a medium in fashion. Ul:Kin’s presence of keeping art alive, matches the youths hunger to break into the art industry.