Words and shots by Joe McPherson 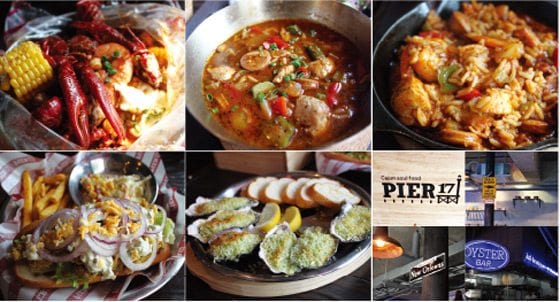 Jambalaya. Why has this not become a trend in Korea? It has all the elements Koreans like—rice, meats, heat. With the bold new restaurant Pier 17 in Garosu-gil, its time likely has come. A diamond in the briefly shining food street that has since devolved into a rough of overpriced franchise coffee shops, Pier 17 serves the most authentic Cajun cuisine I’ve had in Korea outside my own kitchen.

As with other successful restaurants based on foreign concepts, the owners of Pier 17 went overseas and studied, studied, studied the secrets of their target cuisine and then obsessively perfected it at home. There are a few head scratchers, but stress is put on “few.”

The vibe is of a seafood shanty oyster bar in the middle of the bayou. Weathered wood and exposed concrete house Bourbon Street bric-a-brac and warnings of sharks in the water. That’s to set the tone for their signature drink, the Shark Attack: a blue margarita that arrives at the table in a glass schooner. It’s followed by a toy shark that vomits a thick grenadine and pureed strawberry mixture into the glass before diving in.

There’s also an oyster bar, and the place certainly specializes in oysters. You can get them raw on the half shell, Oysters Rockefeller, or au gratin. Meanwhile, the gumbo comes in two flavors: chicken and sausage, and seafood. It’s swampy and robust with real okra.

Pier 17’s Po’ Boys reminded me of the ones I grew up with—almost. Fried shrimp, oysters, or chicken are piled into a French roll with lettuce, tartar sauce, and shaved purple onions. The only odd thing is that they sprinkle cheddar cheese on top, which isn’t bad—just not traditional. Yet the taste is spot on and decadent.

One of the pure joys here is ordering a big bucket of boiled seafood. A seafood boil in Cajun country consists of potatoes, onions, sausages, a ton of spices and of course seafood thrown in. At Pier 17, it comes wrapped in a large plastic bag and placed in a metal pail. Plastic gloves are supplied for you to go to town on your chosen order, be it a combination of shrimp, blue crab, snow crab, or—a first in Korea—crawfish. To traditionalists, I warn that they split the crawfish lengthwise (though that does make for easier pickin’s). The broth at the bottom is a thick stew that is begging for the baguette slices at the table. The only complaint I have is that the restaurant is finicky on how you order. Many times, our server would say to us, “Oh, the owner doesn’t want to do it that way.”

Despite that, the food, drinks, and atmosphere guarantee a great time. Pier 17 has more Big Easy faves like bread pudding, Hurricanes, and soft shell crab salad with an ample hot sauce collection. The prices are also reasonable—especially if you try the generous lunch specials and bring friends.

Good: Crawfish and the most authentic Cajun cuisine in Korea

532-4 Sinsa-dong (13 Apgujeong-ro 10-gil), Gangnam-gu, Seoul. From Sinsa Station, exit 8, turn left into the alleyway of Saerosu-gil (the alley just before Garosu-gil). Walk a good ways. It’s on a five-way intersection.