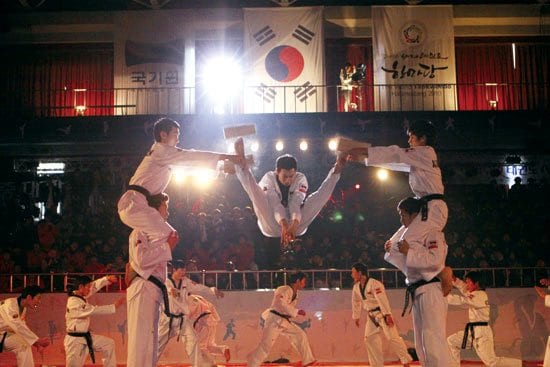 When someone says they train in martial arts, what do you imagine? Do you see them dancing around in white pyjamas? Battling through an army of villains like Jackie Chan or Bruce Lee? Pummelling their opponent in a UFC fight? 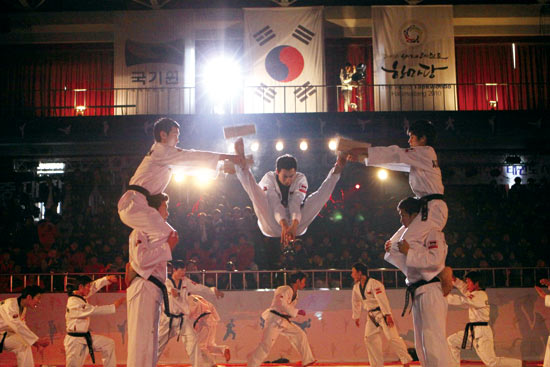 The truth is, the martial arts mean different things for different people. Their origins, history and traditions are as unique as the cultures that produced them. For those living in Korea, the opportunity to become part of this centuries-old tradition is everywhere, but many people don’t know where to begin.

The long road to mastering a martial art

First of all – don’t be scared – most modern martial arts gyms are welcoming, friendly and open to all. The martial arts are big business, both here and around the world, and any good instructor will be happy to see new students who want to train.
Don’t let the ease of finding a gym fool you, though. Training in the martial arts is a long and difficult process.

Forget any ideas you may have of training with Mr. Miyagi and becoming an expert over the course of a five-minute montage of scenes. Studies have shown that mastery of most anything requires 10,000 hours of continued, dedicated practice. If you attend a two-hour class, five nights a week, you’ll “master” that activity in about 1,000 weeks, or a little over 19 years. So be prepared to commit for the long haul if you really want to succeed and excel in the martial arts.

The good news is that as you train you will see benefits. Flexibility, strength, and fitness are just some of the physical benefits to regular training, but martial arts are not just about the physical: you will also be trained in the mental aspects of the art.

You won’t learn how to shoot fire out of your hands (sorry folks, no hadouken here) but training can lead to increased confidence, focus and self-discipline. 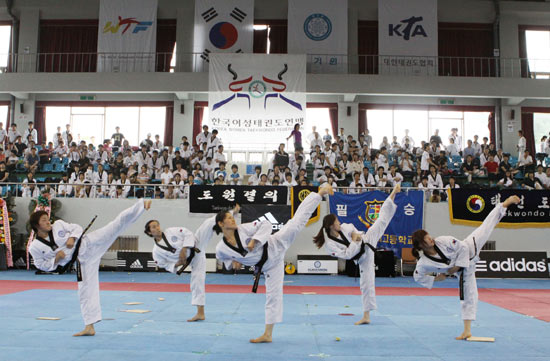 In Korea, you have the opportunity to train in various styles. Of these, probably the most well-known is taekwondo (태권도), and there are thousands of gyms dedicated to the art in Seoul alone. Taekwondo is split into two groups: The ITF (International Taekwon-do Federation) and WTF (World Taekwondo Federation).

Sadly, the in-fighting and politics between these two groups would make Machiavelli look away in disgust. Their history is long and intricate. But luckily, you don’t need to get involved in any of that to enjoy training in either style!

The ITF is commonly seen as the martial arts-focused version of taekwondo. This is due to its focus on self-defence training. In most ITF gyms you will train a hybrid style of fighting, focusing on the kicks and strikes that make taekwondo famous, but also incorporating throws, breakfalls and joint-locking. There is an emphasis on breaking or “destruction” techniques in ITF belt tests.

Very early in your training, you may be asked to break wooden boards using kicks or strikes to demonstrate your power and precision in techniques. An ITF sparring session also looks closer to kickboxing or karate than the WTF counterpart, and many ITF practitioners are successful full-contact kickboxers (and some have even made the leap into the Ultimate Fighting Championship or UFC!).

In Seoul, the only ITF school is The Way Martial Arts, offering hapkido and MMA (Mixed Martial Arts) classes alongside taekwondo.

The WTF (or World Taekwondo Federation) is perhaps the more famous style. This is thanks to WTF taekwondo becoming an Olympic event in 1980. This was a double-edged sword, however; although the art has become iconic, the obsession of some instructors to “win, win, win” has led to a dilution of the realistic side of training. A lot of WTF gyms have let parts of taekwondo fall by the wayside in favour of focusing on aspects that will net them trophies and medals.

This is how WTF taekwondo got the reputation for being a sport rather than an art. It is still possible to find traditional gyms which will teach you all the aspects of taekwondo (not just how to win medals), but you need to be VERY careful when choosing your gym. Arirang Taekwondo is a very friendly international club in Seoul. It can be found on Facebook or online at cafe.daum.net/arirangtaekwon. 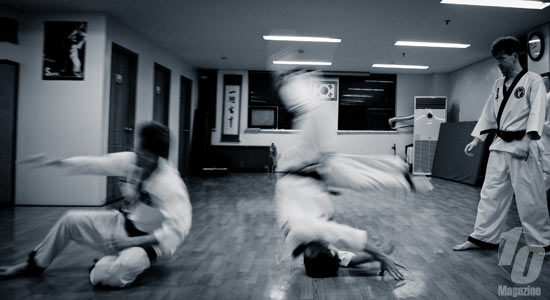 Hapkido: many kwans and one philosophy

If kicking and punching are not really your bag, then hapkido (합기도) may be more your style. Hapkido’s history is also long and detailed – and once again the different kwans (schools or styles) can get quite venomous in their attacks on each other. Without going into too much detail, all hapkido kwans follow a similar philosophy – using pressure point attacks and strikes to help set up joint locks and throws. Its main philosophy is on early interception of techniques and moving your body smoothly and quickly to absorb and ultimately divert any oncoming attacks.

This doesn’t mean that hapkido is purely defensive, however. Since hapkido incorporates the throws and joint locks commonly found in soft styles while also borrowing kicks and strikes from styles like taekwondo, it covers a wide range of techniques and applications.

Of course, all of this depends on which style you train in. At present there are at least a dozen different kwans of hapkido around the world, all with slightly differing approaches and techniques, and that’s not even counting the hundreds of independent gyms out there. Luckily for us, though, hapkido gyms are almost as common in Korea as taekwondo gyms. Another bonus is that hapkido is seen as a more respectable art for adults to study as well, so you probably won’t get as many weird looks if you ask your Korean friends to help you find a place to train. If you want a truly traditional experience here in Seoul, you could do worse than Sangmukwan International Training Center in western Seoul. sangmookwan.com.

Finally, we come to a lesser-known Korean martial art: kumdo. Kumdo is a sword-fighting art which is also divided into two distinct styles like taekwondo. Daehan Kumdo (검도) is the Korean equivalent of Japanese Kendo. It is a duelling style (similar to European fencing) which uses jukdo (죽도 bamboo swords) to attack specific body parts. Training involves drilling set attacks and defences and has a heavy focus on sparring. Students in Daehan Kumdo will wear hogu (호구 armour) to protect themselves when sparring against each other.

Winning attacks are delivered to the hand, shoulder or head (all of which are heavily padded) and only count if these body parts are struck with the sword – which, for obvious reasons, is built from strips of bamboo rather than folded steel! There are two main organisations, the KKA and WKA. The KKA is the dominating group and it also has the easiest-to-find schools. For classes and locations please check out kumdo.org (note that you’ll need the help of someone who can read Korean).

The second major variety is Haidong Kumdo (해동검도), the battlefield sword art of Korea. Focusing on facing multiple opponents, it uses forms and fixed sparring drills to train sword techniques as they would have been used on the ancient battlefields of Korea. Practice in Haidong Kumdo involves “live” sword-work, which means cutting posts and bamboo with an actual sword, and qi gong training which focuses on meditation and controlled breathing.

Perhaps surprisingly, Haidong Kumdo is a meditative and spiritual art. Its primary philosophy is an idea called shimgum, or the unification of the mind, body and spirit expressed through the use of the sword. Haidong Kumdo trains the student to look beyond technical perfection and try to find a balance or centre where everything comes together effortlessly. The teachings and philosophy of Kaidong Kumdo come from the warrior class of ancient Korea, and they might seem strange to Western, modern minds.

Still, that doesn’t change the fact that this is the only style on the list where you learn to use a sharp pointy sword to cut things (and honestly, who doesn’t love that idea?). More information, and locations of gyms, is available at eng.hdgd.org

Whatever style you choose, remember to enjoy your training, have fun, be safe, and work hard. Enjoy your first steps towards mastery – it’s a long road ahead.

Deciding on a Dojang
Here are a few general points to consider when choosing a gym to train at.

Distance If your chosen gym is on the other side of Seoul, it’s a problem. Try to find something close to home.

Language If you can’t ask questions or understand the instructions, your training will suffer. Either find an instructor competent in English, or start brushing up on your Korean!

Student Progress Watch a class and take a look at the students. As the students progress, you should see a marked difference in ability. If you don’t, it’s worth asking why.

Testing Ask about the gym’s policy on this. A lot of clubs will promote new students depending on how regularly they train, so don’t be upset if you train once a week and aren’t progressing. As a general rule, two-three classes a week should mean a new belt every two or three months.

Facilities Is it clean? Is the floor padded to allow for safe breakfalling? What equipment is available? Are there showers and changing rooms? All these things will affect your training!

Your Gut Feeling Trust your gut. You’re the one who has to train there. If you’re getting good vibes, go with it.

The Best Defense
A lot of readers may be a little daunted by the idea of entering the world of martial arts. Still, living in a big city like Seoul means it can’t hurt to know a few fundamental martial arts moves just in case you get in trouble. These self-defense techniques, illustrated by Nikia Noel and Mike Durkee, can help you get out of an attack and give you peace of mind when you’re walking alone at night (or even during the day). We’ve included Nikia’s notes so you can read how it works.

Mike Durkee (the bad dude here but normally a pretty nice guy) has made a video demonstration of this self-defense technique. You can find it on our website at 10mag.com/self-defense-video.