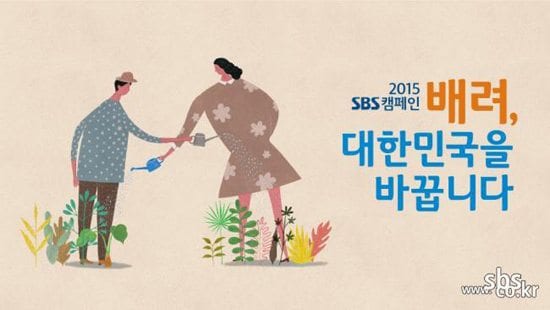 This article is the preliminary ramblings of a future Cover Story for 10 Magazine on courtesy in Korea. Your input in the comments either here or on Facebook will be greatly appreciated and could be incorporated into the article.

Korean organizations are always having “campaigns.” Google image search the Korean word “캠페인” (campaign) and you’ll find thousands of past campaign posters looking to change people’s habits regarding everything from illegally downloading software to diets and recycling. Just about every government agency in the country has mounted a campaign to help change things, as do NGOs, private companies and even local municipalities. This country is awash in campaigns.

Consideration: It will change Korea! 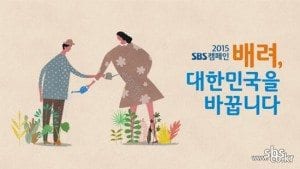 One of the nation’s 3 major networks, SBS, has decided to take on rudeness for their 2015 campaign. Frequently on the channel you will see the call to arms against inconsideration. The obvious implication of the campaign is that too many Koreans are not considerate enough – or just plain rude.

The Korean title of the campaign is, “배려, 대한민국을 바꿉니다!” (Consideration, it will change Korea!) It is worth noting that this is a new kind of campaign, and one which goes after a completely new issue that few would normally consider the subject of a “campaign.”

– Are you a [considerate] person?
– Am I a person [who receives respect]?
– For survival and success we have all worked hard.
– Different from me, unrelated to me, but…
– To someone else they are a good, beautiful, valued person
– Living together happily starts with consideration
– Consideration: It will change Korea.

It’s hard to measure the level of consideration in a society, but the anecdotal evidence of a problem is certainly there – and it goes beyond being just rude. Just last night, SBS covered a man who set fire to an illegally parked car – rude behavior in and of itself, although whether the car should have been set on fire may be a matter for debate (sarcasm folks). Customers have been known to assault store clerks; security guards have been abused to the point that they light themselves on fire; and perhaps the most legendary shocker happened December 5th of last year – what’s come to be known as the Nut Rage Incident (the final impetus for SBS’s campaign?).

I’ve discussed this issue with friends, family, and the team here at 10. Many have come to the conclusion that Korea has changed in many ways for the better in recent decades, but consideration and caring for others outside your immediate family and friends is not one of them.

Multiple Koreans have expressed to me a sentiment displayed in the video – that the population worked so hard to grow the economy and their personal means that competition overtook courtesy. Particularly, those who have achieved wealth seem to feel that those who have not become wealthy are somehow inferior. This is especially disheartening in a country where some of the poorest people are the elderly who fought in the nation’s civil war and worked exploitative hours during their most productive years to grow the economy in the 70s and 80s – and who now frequently work as security guards.

Does Korea have a consideration problem? Is the campaign useful? With 2015 half over, is the campaign achieving its goals? What do you think?