In the Kitchen with Chef Federico Rossi of the Sky Lounge 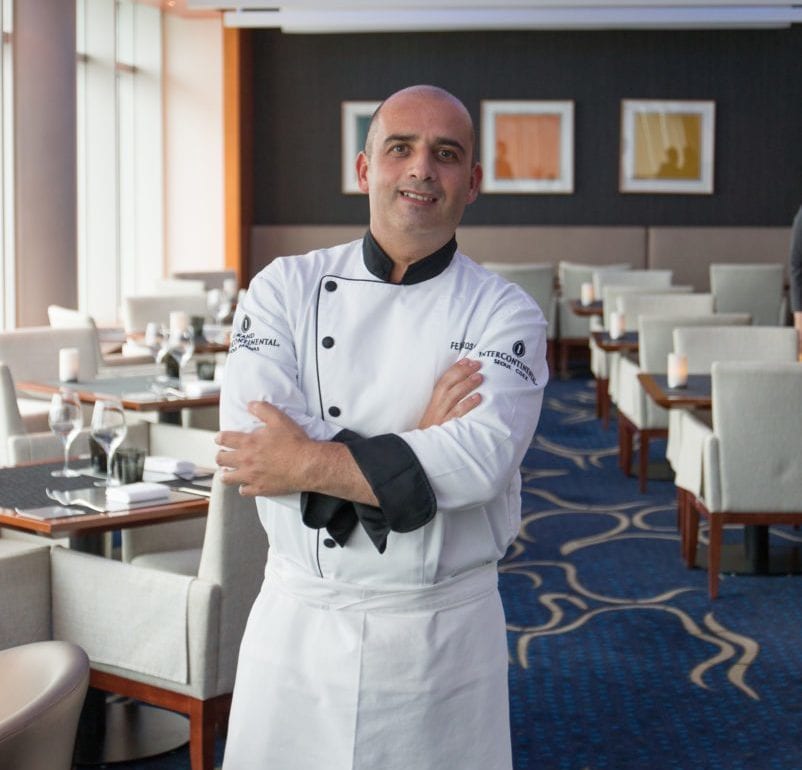 In The Kitchen with Chef Federico Rossi of The Sky Lounge

The Sky Lounge at the InterContinental Seoul COEX offers a vast stock of wines, top-shelf alcohol, and deity-like views of Gangnam which can only be seen from 30 stories up. In 2013, the interior was redesigned with dark blue hues and silver highlights, obvious choices to complement the cityscape during the day and the city lights at night. Not as apparent, but no less impressive, is the food which is largely thanks to resident Italian chef at the Sky Lounge, Chef Federico Rossi.

Chef Rossi arrived in Korea nearly 15 years ago, mostly on a whim. Growing up in his mother’s kitchen, he’d been able to learn the basics of home-style cooking while his lessons in Venice grounded his skills with modern techniques. By the time he arrived in Korea, he’d already cooked in Germany, Switzerland, Taiwan, and, most interestingly, Kuwait. Landing in Korea, he was ready for another country to add to his repertoire.

He laughs now but his pit stop in Korea lasted longer than he expected thanks, in no small part, to his wife who he met during his stay. When he talks about those first weeks in Seoul, it’s not just the new sights and sounds that he remembers but also the culture clash. For a man who has crafted his skills, impressive as they are, on feedback, Chef Rossi was starving for a response for the gastronomic wonders he was crafting. Thankfully, years of working in the country and the influence of his wife remedied his troubles. 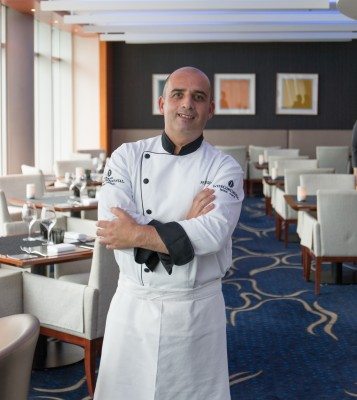 What never changed during that time was Federico’s philosophy of cooking. His philosophy reflects the personality of a well-traveled man. He smiles with a grim grin, but Chef Rossi has an open-mind when it comes to food – any food. This is a man who enjoys Korean barbeque as much as the Mediterranean food he grew up on and can’t stop talking about how much he loves kimchi. For 23 years, Chef Rossi has kept to, what he calls “the philosophy of Italian cuisine:” the less you touch the food the better it will taste.

That’s really one of the largest things that separates the fare at the Sky Lounge from other Italian restaurants in Seoul and, in reality, throughout South Korea. Chef Rossi and his staff serve up delicious plates of homemade that you won’t find anywhere else. Working at a large hotel like the InterContinental, Chef Rossi doesn’t have to settle for non-authentic ingredients. In fact, as long as he justify the costs, his culinary stockroom has very few limits, but he does include local ingredients in his recipes. For anyone rolling their eyes at the idea of fusion cuisine, roll them back. Chef Rossi isn’t looking to create fusion cuisine, he’s looking to add something new while keeping the identity of the food the same.

Any visitors looking for an easy entry into Chef Rossi’s food might want to take a close look at the Ricotta Crab Ravioli. The ravioli is filled with crab, ricotta cheese, nutmeg and zucchini while the plate is streaked with parmesan cream and drizzled with a green pea sauce. Whether it be a bit of seaweed for coloring, sesame oil for texture or Korean chili paste for flavoring, the pasta at the Sky Lounge is a unique gastronomic experience. But let’s be honest, you can’t really go wrong with any of the dishes. Just make sure you don’t forget to enjoy the view.