The K-drama “Itaewon Class” is one of the hottest shows in Korea right now. It’s based on a webtoon, and the easy-to-follow plot, hopeful message, impeccable acting, and charming cast starring Park Seo-joon and Kim Da-mi all play a part in the show’s success — but the characters’ trendy outfits are also a low-key add to the overall entertainment. Let’s dive in and check out what the cool kids on the Itaewon block are wearing.

The character Jo Yi-seo (Kim Da-mi’s role) is an intelligent teenage power blogger with a huge following on social media who boasts a brutally honest and perfectionist personality with sociopathic tendencies. Her first main appearance truly sets the tone for her rebelliously chic sense of style. She flies off of a motorcycle by accident and falls on Park Sae-roy (Park Seo-joon’s role) — indeed a dynamic start to their love-hate relationship. Here, she is seen wearing a tailored leather blazer instead of a traditional moto leather jacket. Fans of the show know that Yi-seo loves leather and with this leather blazer that is so on-trend right now she has already proven herself to be a trend-setting influencer.

Jo Yi-seo finally turns 19 (the legal age for drinking in Korea) and goes out with her friends to a bar in Itaewon. The girls end up drinking with a group of guys that are eager to “get to know” them, but Yi-seo expresses pure disinterest and occupies herself by secretly judging them — she just wants to be with Sae-roy! As for her going-out outfit, she adds a touch of femininity to her rather tomboyish style by wearing some darling jewelry. Throughout the show, we can see that Yi-seo mix and matches bolder, chain link jewelry pieces with more dainty, feminine pieces to highlight both the fearless and lovely sides of her character.

Another character that we shall not forget is Sae-roy’s high school sweetheart and third player in the show’s love triangle, Oh Soo-ah (Kwon Nara’s role). She is the head of the strategic planning team at a renowned food company, Jangga Group. As a young adult and corporate employee, she often appears in business casual outfits. A woman’s suit can seem quite boring at times, but Soo-ah pulls off the businesswoman look with the more trendy, belted blazers. Specifically, she seems to love checkered or striped blazers with belts that accentuate her slim figure.

Now, curious what Sae-roy wears? He is all about practicality, and as an ex-convict he has been out of the loop for recent trends for a while. Thus, in almost every episode he appears in a true normcore outfit: a hoodie and a bomber jacket, which he still pulls off amazingly (hello, Park Seo-joon fans!). He switches up his hoodies though and adds some pops of color to pair with his neutral-colored bomber jackets. Bomber jackets never really go out of trend for men, so he is in luck! 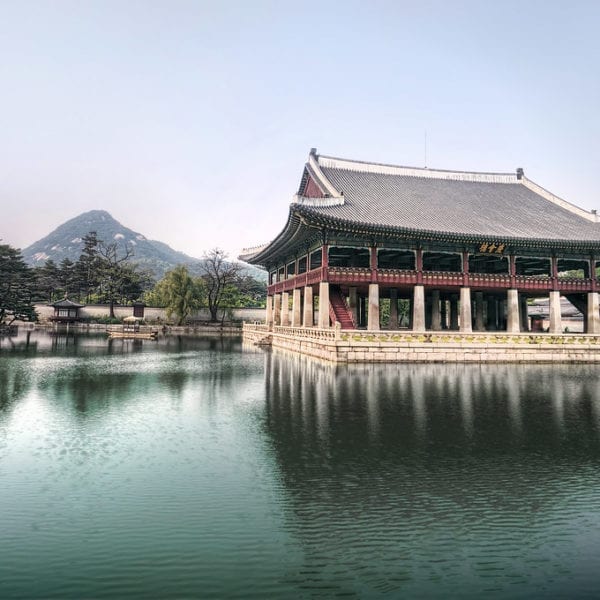 Throughout the show, a recurring fashion trend across all characters is checks and plaids. The DanBam staff including Yi-seo, Geun-soo, and even Sae-roy (who usually wears only basics) all appear in various versions of the plaid pattern, proving it to be a popular K-fashion trend across both genders this transitional season. Yi-seo wears a bright red coat when she boldly confronts the Jangga Group’s president, goody-good boy Geun-soo wears a preppy plaid shirt on the night he goes clubbing, and Sae-roy wears an oversized plaid flannel overshirt with his inseparable hoodie.

There are a few weeks left until the show is over, so if you aren’t on it already, now is the time to catch up! And if you are already a fan of the show, let’s see how things turn out for Sae-roy and his DanBam adventure, as well as his love triangle!