As varied and delicious as Korean dining options might be, there are times when you crave the taste of something more familiar – something that doesn’t involve rice, kimchi, or dozens of side dishes. Enter fusion cuisine.

Generally classified as any sort of mash-up combining elements of different regional cuisines, fusion food melds together the best bits of your favorite dishes. Some of the most popular dishes in Korea are, in fact, fusion-based – mouthwatering fare like jjajangmyeon, tangsuyuk, or even the simple yet hearty bokkeumbap. This is hardly surprising given the rich history that China and Korea share, a prime example of how Koreans have added their own local flavors and fillings to what is essentially imported cuisine.

When it comes to Western options, the choices are predictably far fewer. You might even expect raised eyebrows when asking about Western cuisine in a country like South Korea, their most infamous take being the potato-on-pizza debacle. Fortunately, for more discerning diners the fusion scene in South Korea has come on in leaps and bounds. No longer are customers resigned to poor imitations of their favorite dishes. Rather, South Korean restaurants are beginning to get Western (and non-Korean dishes in general) food right.

Dongmyeong-dong in the Jeollado capital of Gwangju has emerged as a neighborhood with particularly exciting fusion flair. It’s a fascinating blend of dimly lit Korean pochas (pubs) sitting alongside more polished Western restaurants. Cafes line the street and a distinctly younger crowd come here to enjoy their weekends. The neighborhood itself was home to the well-heeled prior to the Provincial Government offices moving to Muan. With the arrival of the nearby Asian Culture Center, however, it regained its status as Gwangju’s cuisine hotspot. It’s distinctly more upmarket and refined than the nearby downtown district, and the selection of restaurants and cafes reflects this.

Let’s go on a tour of four highly recommended fusion restaurants in Dongmyeong-dong. While these restaurants might specialize in Western dishes, we’ve classified them as fusion by virtue of the inevitable Korean influences that find their way into the menus.

This pasta restaurant previously went under the name Nordique, and despite the Scandinavian moniker, you won’t find any pickled herring or Swedish meatballs here. Instead, prepare your palate for some of the finest Italian food in the city. It’s not just fusion in terms of menu but setting too, set in a traditional Korean hanok – hardly the first place you would think to find a pasta joint.

The menu – although thinly scored – aims for quality over quantity, with the pasta prepared fresh. The gnocchi is my personal favorite; the delicately creamy truffle sauce a perfect pairing with the melt-in-your-mouth dumplings.

Most encounters with Mexican food in South Korea tend to be disappointing experiences. Not for lack of trying, as some restaurants either don’t have the ingredients or the expertise to pull off one of the most popular food genres in the world.

Ahorita manages to nail the Mexican dining experience, however, from the quesadillas to the enchiladas and even the Frida Kahlo print which adorns the main pillar. It truly is rare to find a Mexican restaurant as authentic as this, no less in a city like Gwangju, which makes it something of a gem. They also have specials running from time to time, so if mid-week tequilas and tapas sound like your vibe then Ahorita should definitely be on your foodie list.

It’s a well-known fact that a good few of South Korea’s dishes are Japanese adaptations – think fried pork cutlets, katsudon, and the many variations of ramyeon. Fasuto Food showcases a more authentic Japanese menu, however, with an honest selection of mazesoba and various donburi. This restaurant is also something of an upstart in an area packed with Japanese fusion joints. The interior feels more contemporary and trendier than its peers but the food is still relatively down-to-earth. Safe to say then, that this is the type of place that gets full pretty quickly. I’d have to recommend the Iberico Steak Bowl as the stand-out dish here, as the chefs do a superb job of preparing the meat sous vide. 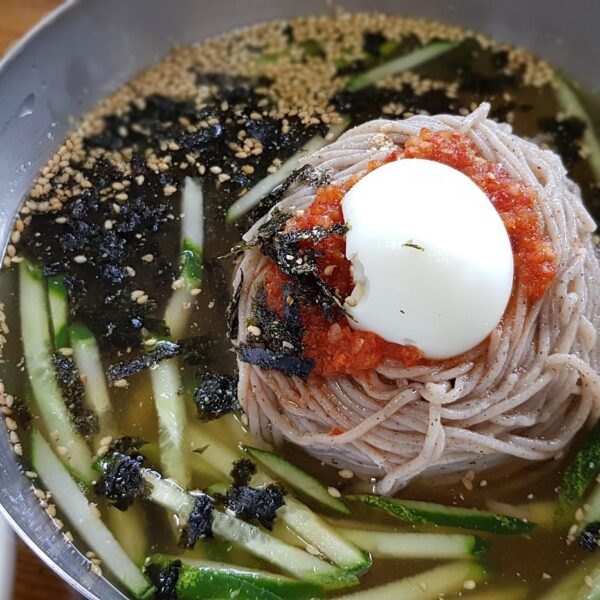 Ordering pasta is not without peril in some Korean restaurants, but fortunately Raffine gets it just right. Apart from the usual pasta and pizza options, there’s also steak and risotto on offer, the latter something of a rare find for Italian restaurants in South Korea. Choose either the risotto or the Rose pasta along with the Diablo pizza for the perfect pairing. The velvety pasta is a great foil to the decidedly spicier pizza.

If you’re in Gwangju and feel like sampling something other than Korean food, these restaurants will be sure to satisfy even the most discerning palate. In fact, be sure to take a stroll around Dongmyeong-dong and explore the hidden alleyways of this historic enclave – you may be surprised by just how many fantastic fusion eateries line the streets.