Euljiro is a single long street—stretching along from Euljiro-1ga to -7ga—in the ancient heart of downtown Seoul. Running parallel to the Cheonggye Stream, the Euljiro district is where people go to buy lampshades, buckets of paint, bathroom tiles, and neon clown-face signs. Wander into the network of alleys and you will discover a lost world of gritty tradesmen and restaurant delivery women scuttling about with trays on their heads.This is the setting for one of Seoul’s more exotic and lesser known food alleys: the sea snail street of Euljiro 3-ga. Surface from subway exit #11 or 12 and you will come upon about a dozen snail establishments, some of which are almost half a century old. After dark the signs light up and the plastic tables on the sidewalk begin to gather customers and accumulations of large beer bottles.The customers are the working-class types that one would expect to find in Euljiro, and the mood is decidedly relaxed and open (unlike many of the soju and beer “hofs” around the country with their isolating booths and cubicles).Whether seated inside, next to walls covered in graffiti scribbling, or along the sidewalk, every party will have ordered the street’s signature dish of golbaengi(골뱅이) as a drinking snack, or a perhaps a drinking meal. Golbaengi is Korean for sea snail, also known in some places as whelk.The most popular of the combined restaurant/drinking dens and also the closest to the subway exits is Yeongrak Golbaengi (영락 골뱅이), with an original establishment across the street from a branch location. Like all the other snail joints, Yeongrak serves a domestic brand of canned whelk called Euljiro Golbaengi. You will see these distinctive cans stacked on the shelves and the empties serving as ashtrays.

Ordering is simple in Yeongrak Golbaengi, as there is only one dish and it comes in only one size. The dish is a layered bowl of yellow on red on green on shiny rubbery white. The top layer is a dollop of garlic paste, under which is a mound of red pepper powder. Below this are the bedding of shredded spring onion, the structural reinforcements of dried fish slices, and the foundation of enormous sea snails. Before mixing this simple concoction, you may want to spoon off some of the ground red pepper, depending on your level of tolerance.

The dish is an exotic medley of flavors, and spicy enough to make it last the table life of several tall beers. Thankfully, a Korean egg loaf (계란말이) will be on hand to quench the spiciness. Extras that can be ordered and mixed into the snail salad include ham (spam), thin noodles (소면), additional dried fish, and additional snail. While the golbaengi experience may seem pricy at W25,000, keep in mind that the dish is meant to be shared between at least two people and that the domestic beer is only W3,500 for a large.

On the way out of Yeongrak Golbaengi I noticed hanging on the wall a 1957 ode to golbaengi by a poet named Bang Nam-su. He was writing about the golbaengi scene in nearby Chungmuro where, indeed, a few restaurants still exist. Proving himself a connoisseur, Bang wrote:

Galchi Jorim Street Namdaemun
Cutlassfish braised in soy sauce (갈치조림), served on rice, was an expensive and rare dish in less modern times. Nowadays, it can be enjoyed at a cheaper price in one of Namdaemun Market’s two famous food streets. Find Galchi Jorim Street outside Exit 6 of Hoehyeon Station. 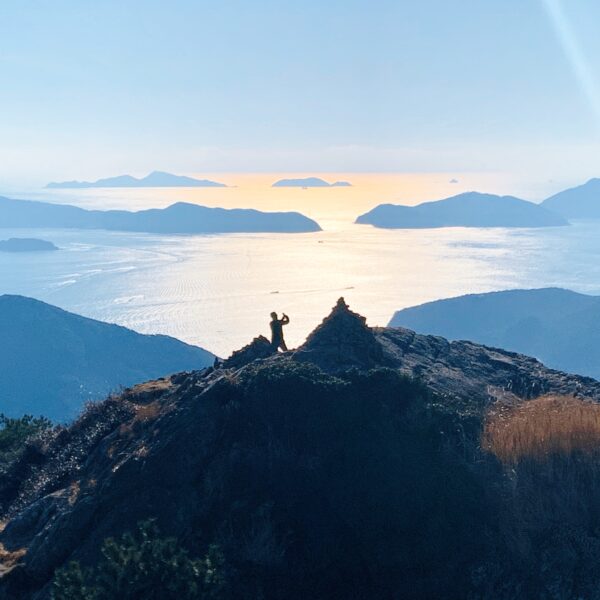 Gamjatang Potato Stew Street Eungam
The word for potato, gamja, is pronounced the same as another word that refers to a type of pork—and so Eungam’s famous potato stew is also filled with hearty pork ribs. After finishing your gamjatang, try bokkeumbab (fried rice) made on-the-spot using the leftover broth. Order it at Exit 2 of Daelim Market near Saejeol Stn.

Barley Bibimbab and Kalguksu Street Namdaemun
While barley was a poor man’s food in the old days, it’s now known as a nutritious alternative to white rice. Namdaemun’s bibimbap is made with barley, and it comes with a small serving of kalguksu as an extra or dum (덤) side dish. Take Exit 5 of Hoehyeon Station and turn right to find the street, marked by its tiny entrance made of plastic bags.

Do you want to get a firmer skin without surgery? Then according to local wisdom, you should visit Mapo’s Jokbal Street. Jokbal is boiled pig’s foot, and it’s filled with natural collagen. Try it with sauces of tiny salted shrimp or bean paste, as well as the ultimate side dish, soju. Jokbal Street is at Exit 5 of Gongduk Station.

Tteokbokki Town Sindang-dong
Tteokbokki or spicy rice cakes is the beginner’s Korean street food. The dish was supposedly first made in Sindang by Mama Maboklim, whose store still stands here. For those who aren’t good with spicy sauce, try the fusion version made with jajang black sauce. Take Exit 7 of Sindang Station to get to Tteokbokki Town. 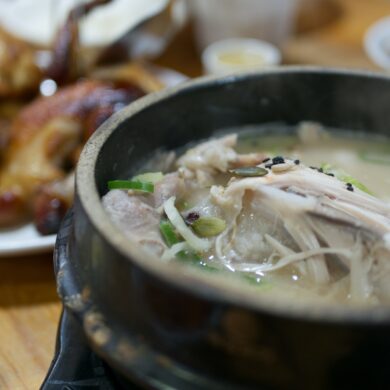 Beat the Heat Korean Style with a Boiling Bowl of Samgyetang