Expat Expertise: Pedal to the Metal 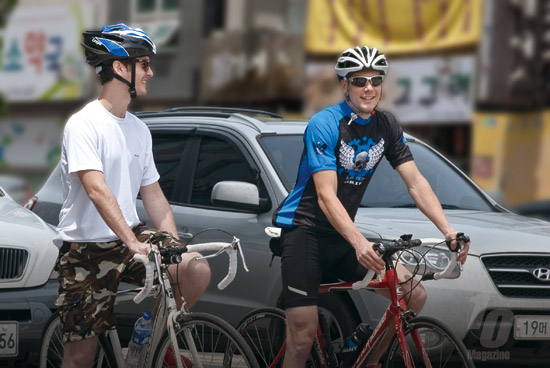 Learn the rules of the Korean road and join the other cyclists donning spandex and slicing through the wind at 40-plus kilometers an hour.

So what makes cycling in Korea so special? As a foreigner, it can be a challenge to find the right equipment. If your Korean is limited, bet on getting lost. Races are difficult to find too. So why are more and more people cycling in Korea? Let’s run down a list of why Korea is an amazing place to cycle.

Cyclists in Korea are a growing group that search out newbies, cradle them, wean them, and nurture them, until they are comfortable to ride out on their own two wheels. They are a tightly-knit group that is always willing to help anyone out.

If you’re looking for a local group most major cities in Korea already have them. If your town has a scarcity of spandex clad cyclists, what better way to get more roadies out there than convince a friend to start cycling! If that isn’t an option visit your local community center or ask a Korean-speaking friend (if you can’t yourself) to look up groups on Naver in your town.

On top of the amazing groups, let us not forget the endless stories of friendly strangers helping cyclists; A warm smile, free water or fruit, a hot meal, help with directions – the list goes on. The unrelenting support alone, makes cycling in Korea worth it.

Luckily most major road signs in Korea are written in English and Hangul. If you’ve left your map at home (the Korean Tourist Organization usually stocks them in English), make sure you try and stick to the Korean national routes (blue ovals with white numbers), and the Korean local routes (yellow rectangle, black numbers). The former roads run through nearly all-major cities and are generally cyclist friendly, but always have a good reflector, a flashing light and stay on the right hand side. The Korean local routes are a little harder to navigate, but are great for scenery. If you’re ambitious (or have a GPS) try some of the farmer fields outside the cities. They are virtually abandoned, and most are paved.

The best times to plan your cycling trips around Korea are the spring or the fall. Winter = ice + freezing wind burn and
summer = monsoons + exhaustingly hot. Avoid them if you can, but if you absolutely must get your two-wheel riding fix, make sure you’re geared up before setting off.

If you’re coming to Korea with your bike, check your airline for baggage allowance. Once here, transporting your bike on intercity buses is no problem. It’s best to avoid the subway with your bike, as you can be ticketed. If you take the risk, take the first or last cars, avoid rush hour, and keep your bike close to the walls. As for city buses, why bother? You can pedal faster!

The proximity of cities to rivers, lakes, and mountains make Korea a mecca for beautiful scenery and challenging routes. Paths are abundant around rivers and lakes, or check out the Korean local routes around your town or city. Big or small, cities have sights and temples just beyond their limits. Or plan a route into your neighboring province; it’s closer than you think!

Stay at a lovely minbak (a cheap version of a B&B), yeogwan (motel) or a jjimjilbang (sauna) and make it a mini “cyclation”. Climbing your thing? Korea stocks plenty of climbs throughout its mountainous land. Head to Gangwon-do for the big mountains and the best autumn scenery. No need to worry about refueling on your way either, as the amount of convenience stores throughout the country is baffling.

Although the infrastructure for cycling in Korea isn’t up to par with, say, the Netherlands, it is growing and for the scenery alone it’s worth creating that eight-car trail behind you. Who knows, it might just make a driver slow down and enjoy the view enough to pick up cycling as well!

There are expat-organized tours that are regularly posted on Facebook groups like Han River Riders and Cycling in Korea, but Korean organized races seem to be scarce for foreigners.  One massive ride coming up is the Korea Randonneurs’ event, a 1000 km Seoul-Busan-Seoul tour in October (korea-randonneurs.blogspot.com).

Korea’s cycling community is always welcoming (and exceptionally helpful), so gear up, clip in, and get pedalling! 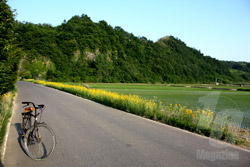 If you’re starting out:  adventurecycling.org/features/buyersguide.cfm
To improve your riding: road-bike.co.uk
A great place to post cycling questions: bikeforums.net/forum.php