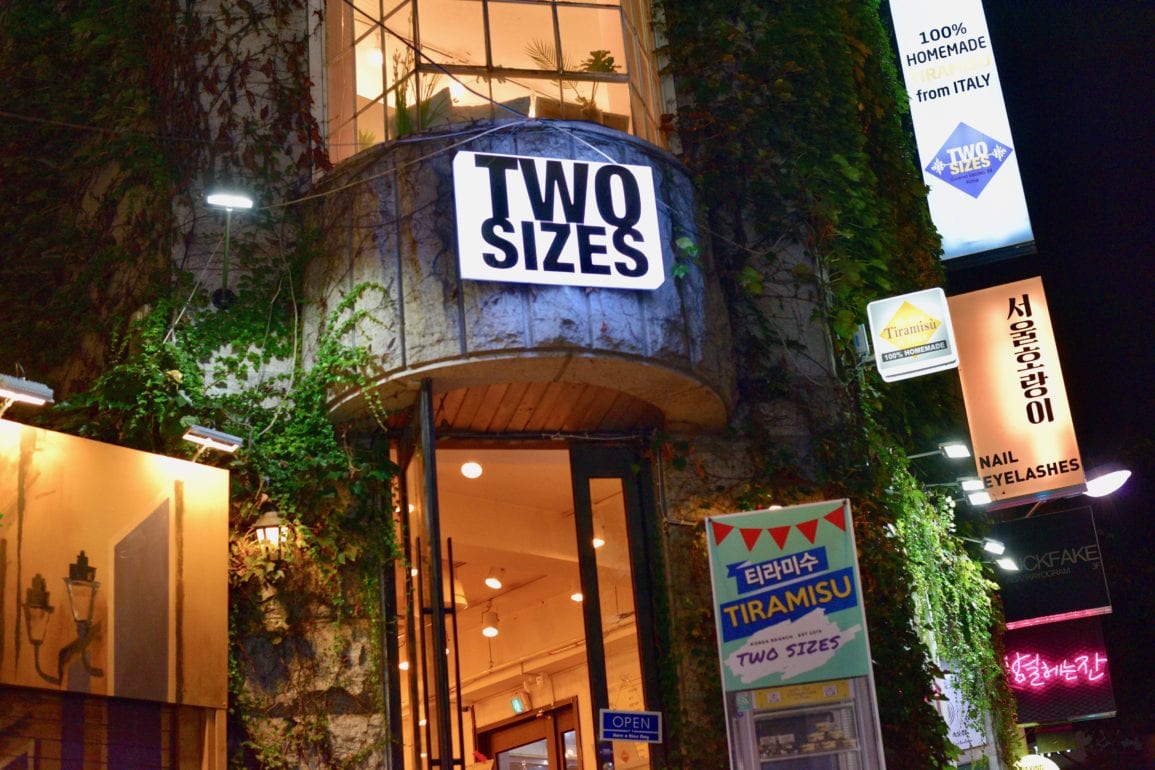 At least once in a lifetime, we eat something that lingers in the back of our minds for far longer than it should. Whether it’s a fancy meal that you share with someone special, or a foreign cuisine that opened your eyes to a new culture, it’s an experience that a lot of people can share.

When Korean-American Joseph Kim visited Rome in October 2018, he wasn’t expecting a small tiramisu shop to change his life course. A friend and tour guide took him to the original Two Sizes, which is the highest-rated dessert shop in Rome on Trip Advisor. Although stating, “I’m not a dessert guy”, the tiramisu left such an impression that a year later, he opened the first Two Sizes franchise in Hongdae.

“I’m not normally one who craves food, but I had this tiramisu while on vacation and I would just think about it even after I was back in Korea,” said Joseph.

A couple of weeks after returning to Korea from his trip, he messaged the Two Sizes Facebook page, asking if he could bring a Two Sizes tiramisu shop to Korea. He wasn’t expecting a reply, let alone a yes.

As the wheels on the project started turning, Joseph started looking for spaces and had the original Italian owner, Chef Francesco Cutrupi, come to visit Seoul in April to help find suppliers and lay foundations for the shop. In June 2019, Joseph went to Rome for 2 weeks in order to learn the recipes from the original owner himself.

“We use authentic Italian ingredients because it is very important for myself and the Two Sizes owner to replicate the taste that they have in Rome. We definitely don’t skimp or look to cut costs when it comes to the ingredients,” says Joseph.

Tiramisu is no exception to Korea’s affinity for changing traditional recipes of cuisines in order to fit the local taste and budget restraints. Many dessert and coffee shops in Korea use cream cheese instead of mascarpone and don’t use the correct amount of layers (which according to Italians should be 4!). Joseph says one reason that the original Italian owner was so keen on having Joseph operate in Korea was his commitment to keeping the recipes, ingredients, sizes and all the same. The only differences between the original shop and the Korean shop would be the use of American peanut butter (which the owner believes tastes better), and the substitute of caramel flavor for chocolate. Joseph stated they couldn’t find a proper caramel supplier in Korea, so they opted for a recipe with chocolate instead.

But the big question is the taste, right? We’ll be the ones to say that Joseph backs up his talk. It’s easily the most authentic tiramisu I’ve had in Korea, and one of the best desserts I’ve had in my life. The fact that they use the same ingredients and recipe as the Italian location — yeah, that one with thousands of amazing reviews in Italian, English and more — means you really are getting some authentic and delicious tiramisu. The 10 Magazine ranking for Two Sizes flavors would be peanut butter, original, strawberry, pistachio then chocolate, but we encourage everyone to try them all.

You can follow the Two Sizes brand story through their Facebook and Instagram pages. Check out their location via the 10 Directory and make sure to visit to try the tiramisu yourself.