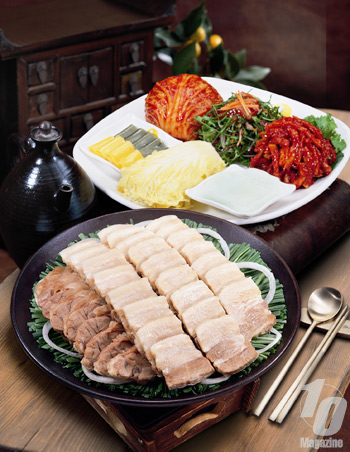 One of the earliest food memories in my career as a chef was picking up a prawn from the salad area, putting it in a lettuce leaf with a spoonful of cocktail sauce and eating it at one go. Years later, you wouldn’t believe how glad I was to discover that Koreans enjoy this as much as I do.
In the Korean kitchen, bossam means steamed pork wrapped with a leaf of any sort. The pork is slow-cooked in stock flavored with soy, sesame and ginger among other ingredients and then served warm and sliced on a platter with the lettuce. Various condiments can then be added, and that’s where the fun begins.
First of all, it’s essential to add a dab of the special sauce ssamjang (쌈장), a mixture of soybean paste, red pepper paste, chopped garlic and sesame oil. Raw onions, green Korean peppers, kimchi, and garlic can also be included in the wrap depending on your taste. Traditionally, a dish of saeujeot (새우젓, pickled shrimp) is provided to dip everything in. This took some getting used to when I first tried it, but if it helps it’s not unlike Thai fish sauce in flavor.
As I have discovered with a lot of Korean dishes, there are a few bossam variants out there. Pickled cabbage leaves can be used to replace the lettuce used for wrapping, which gives it a completely different flavor. The types of lettuce that are used can also vary. At home, I use butter lettuce hearts, but I have mostly seen red oak lettuce used in the restaurants here. It’s even possible to use beef instead of pork belly for the meat portion of the dish, though of course pork is much more common.
This down-home Korean dish rocketed to the top of the culinary world recently thanks to one of New York’s most celebrated chefs, David Chang, who has developed recipes based on his Korean heritage. He named one of his restaurants Ssam Bar, where he serves his own original take on bossam, which has captured the imagination of New Yorkers. He adds a raw shucked oyster to his dish, a distinctly Korean move.
Bossam is a great stop on our journey through wonderful Korean dishes, but be sure to stay with us for more in the months to come. 

Famous Bossam Franchises
Nolbu Bossam 놀부보쌈
The “Nolbu” here refers to the greedy, scheming older brother in a Korean folk story who takes the whole inheritance for himself. True to form, the Nolbu Bossam portions are bigger and cost more, starting at W27,000 for two people. The Heungbu (referring to the unlucky younger brother) portions are a bit trimmer and cheaper. If you’re the type who likes to bring home the bacon, you can have the bossam delivered to your door with a call to 1599-5382.
nolboo.co.kr, 02-574-5511

Won Halmoni Bossam 원할머니 보쌈
Even if you can’t read Korean, you’ve probably seen the wrinkled grandma on this franchise’s distinctive orange sign. We’re not sure how much a grandma had to do with  original grandmothe’s bossam (what the name means), but it sure tastes good. Pig out on pork starting at W23,000 for 350 grams. For fun, you can also try jokbal (족발), or pig’s feet, a dish often found alongside bossam. Call 1599-5353 for delivery.
bossam.co.kr, 02-3408-2000

Korean  Picks for Bossam
Samhaejip삼해집
Maybe this is where David Chang got the oyster idea. At Samhaejip in the Jongno district in downtown Seoul, your boiled pork comes with oysters on the side. The small bossam portion (W20,000) might not be enough for two if it weren’t for the gamjatang (a Korean potatoe/pork spine soup) served after the main meal (with free refills!). Don’t get there too late if you don’t like long lines. Head out of ex. 15 of Jongno 3-ga Stn. (lines 1, 3, and 5) and squeeze into the tiny alley to the left just past the pharmacy (약국­). Hang an immediate right and Samhaejip will be the second bossam place on your left. 42 Gwansu-dong Jongno-gu, Seoul 02-2273-0266