Art with a View: SkyArt Gallery at Building 63

Words and shots by Davis Jung 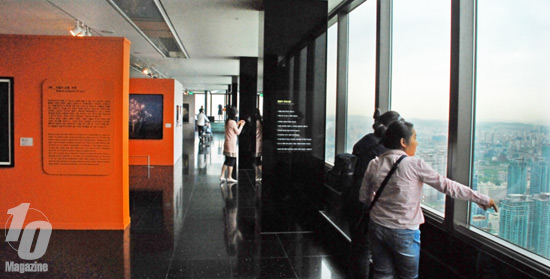 It’s a strange feeling to have your ears pop while trying to access an art gallery. But it’s an experience you’ll have to undergo in order to reach the photography exhibition entitled”The Moment” at the SkyArt Gallery in the 63 Building, located on the southeast tip of Yeouido in Seoul. The 63 Building itself is a famous architectural space, having once held the title of the world’s tallest building outside of North America. Located near the building’s peak, the SkyArt Gallery is literally the highest art gallery in the world. Getting there almost rivals actually being there: you ride a glass elevator that shoots straight up to the 60th floor, offering you an escalating and astounding view of the city of Seoul.

Once you reach the SkyArt Gallery, you may feel a bit overwhelmed by the visual offerings. Glass walls encase the gallery so that wherever you roam you are offered fantastic panoramic views of the city’s skyline. At the same time, “The Moment” has collected some of the best works of internationally renowned Korean artists. For me, I wasn’t sure which of the two to appreciate first, eagerly gazing at one series of prints and then rushing back to press my face against the windows, seeing the Seoul skyline vanish into the clouds. 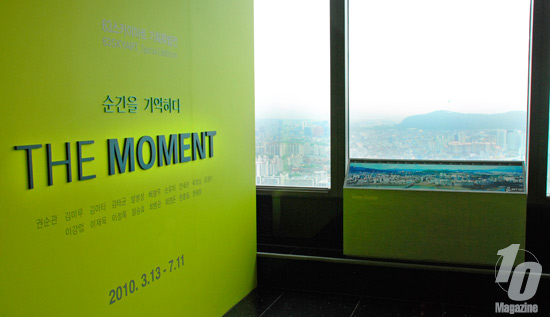 After I had enough of feeling like I was on top of the world, I turned my attention to the photography assembled in SkyArt. Separated into three sections, “The Moment” manages to exhibit a wide variety of Korean photographers while finding recurring motifs throughout. This allows each photograph to stand on its own while at the same time being enhanced by the photographs around it. For example, Yook Myong Shim’s elegantly traditional series of black-and-white portraits offer a striking contrast to the neighboring photos by Yoon Jeong Mee featuring children in cluttered rooms filled with super-saturated primary colors. In the section entitled “Nature,” Bang Byung Sang’s bright portrayals of beaches employ overexposed whites, tans, and beiges, giving us a breezy and sunny worldview.  This is in stark contrast to another artist’s perspective on a similar subject: Kim Tai Kyun’s photography on the abstract serenity of the ocean is a Rothko-esque reflection on the deep blueness of the sea.

The best section, though, was entitled “City: A Common Space.” What was so successful about this part of the exhibition is that the photographs are not only enhanced by their collective theme, but by the actual location of the gallery itself. As I said earlier, it’s impossible to escape the amazing views of Seoul while making your way around the gallery. One could almost say that the windows are picture frames, and the city itself a perpetual piece of art on display. By then showing photographs with a city motif, one cannot escape noticing the “real” world of Seoul outside the windows and the imagined perspectives of the city by artists on the walls. I was most excited to see that the collection had included photographs by Kim Miru.  Quickly becoming an internationally recognized photographer, Kim Miru takes brilliant photos depicting herself naked in abandoned city spaces. The often threatening and jagged expanse of city wastelands in juxtaposition to Kim’s vulnerable naked body contains a powerful message about body versus space.

The clever combination of the real city outside with the fantasy of the photographs inside gives each the properties of the other: viewers know that fantastical depictions of cities in the photographs are rooted in real places with real people, while the outside city of Seoul takes on more character and personality. While many other exhibits only offer the chance to escape into a beautiful if ephemeral world of fantasy, “The Moment” uses its unique location overlooking the city of Seoul to suggest that art and life are not so separate after all.

Insadong Art Shops and Galleries
Whether you want to hang up some inexpensive Asian art in your officetel, go antique-hunting for Joseon Dynasty relics, or view contemporary art while enjoying soothing traditional Korean tea, Insadong has it all.

Bakyeongsukyo (박영석요) At this famous traditional ceramics shop, you can not only get a sampling of high-quality Korean pottery, but also see traditional potters at work. A favorite of European royalty (including Queen Elizabeth II of England!), the celadon porcelain can be a bit steep for the average art shopper.
7 Gwanhun-dong, Jongno-gu, Seoul. 02-730-7837

Gyeongin Museum of Fine Art At the heart of Insadong, this museum has three gallery halls, an outdoor garden and stage, and a traditional hanok teahouse. Sip some fragrant Korean teas in the hanok house and garden after browsing through the art in the gallery halls. 30-1 Gwanhun-dong, Jongno-gu, Seoul. kyunginart.co.kr
02-733-4448