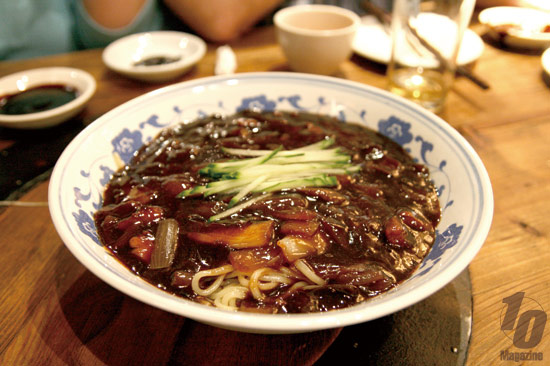 If your lack of a love life is getting you down, turn to these black noodles for a quick pick-me-up.
Ihave to admit it—I never liked the look of jajangmyeon. But then again, I was only coming across it on the golf course where it is one of the choices at the half-way snack bar. This probably had something to do with its color and the overuse of cornstarch. Of course, once I had the authentic version, I understood why it’s one of the most, if not the most, popular dish in Korea.
Jajangmyeon is basically a dish of noodles covered with a sauce of black bean paste and meat, mostly pork, and vegetables. Despite being one of the unofficial symbols of Korean cuisine and the single most-ordered take-out food in the country, it is in fact an import, brought across from China over 100 years ago and now adjusted to Korean tastes.
Let’s start with the noodles, known as sutamyeon (수타면). They are hand-made with regular flour (rather than potato starch like their cousins in japchae) and then quickly blanched in boiling water and set aside for the final preparation. The sauce is made by cooking the vegetables and pork in a pan and then adding the black bean sauce. Next, stock is added to cut the saltiness, and it is finally thickened by adding a little cornstarch, a typical Chinese touch.
No dish is an island in Korea, of course, so there are also side dishes to consider. Danmuji (단무지, yellow pickled turnip) is the usual accompaniment together with a dish of raw onions marinated in rice vinegar. I have also been served a dish of the black bean sauce itself to dip into, although this isn’t really necessary. Ironically, jajangmyeon prepared in the Korean way is now becoming popular back in China, completing the circle started by the Chinese immigrants years ago.
But this particular dish’s real claim to fame is the role it plays on Black Day, which takes place on April 14th. On this day, the poor single souls who missed out on the chocolate and gift-giving on Valentine’s Day and White Day get to drown their sorrows with other singletons and eat jajang noodles, the black color representing the gloom of their situation.
So if April 14th rolls around and you need something to fill that empty space in your life, call your local restaurant and have a bowl of jajangmyeon sent over. While it may not fill the void in your heart, it will definitely fill your stomach.

10 Tip
If you pay careful attention to spoken Korean, you will eventually hear jajangmyeon pronounced (and even written) as 짜장면 (jja-jang-myeon). This isn’t standard Korean, so if you hear your Korean friends make this blunder, you can demonstrate your mastery of the language (and pretentiousness) by correcting them.

Bokseonggak 복성각
This restaurant is especially popular with young people. Come here to taste unusual jajangmyeon dishes with colorful sauces in yellow or red and a variety featuring flat noodles.
31-8 Changcheondong, Seodaemungu, Seoul. 02-364-1522
–
Hyeonraejang 현래장
If you want to see how jajangmyeon noodles are made, this is the place. They’ve been hand-crafting pasta for 60 years, and the chef has appeared on numerous TV shows as a master of the art. Visitors can see him tossing the dough as he prepares your dish.
Dabo Building B1, Mapodong 140, Mapogu, Seoul. 02-715-0730
–
Gonghwachun 공화춘
Opened in 1905, Gonghwachun was the first Chinese restaurant in Korea and not so coincidentally the place where jajangmyeon was first served here. Their old restaurant building is registered as cultural property No. 246, and the current restaurant is housed in a new four-story building about 100m from Incheon Stn. (line 1).
China Town, 5-6 Bukseongdong 3-ga, Junggu, Incheon. gonghwachun.co.kr 032-765-0571