A Taste of Korea: Hitting the Duck Trifecta 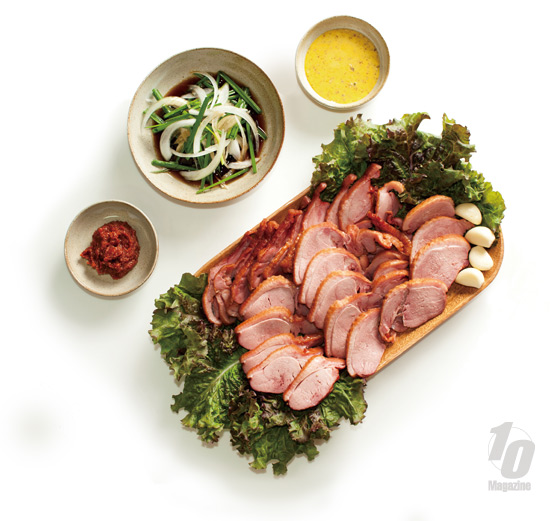 Duck-loving gourmands in Korea can have their favorite bird smoked, baked with sulfur, and stewed.

As in most Asian countries, duck is widely available in Korea, though it doesn’t reach the height of popularity it enjoys in China. It will always be playing second fiddle to hanwoo (한우, Korean beef) and dwaejigogi (돼지고기, pork). There are three main ways to prepare duck, however, which are worth a look (and a taste, of course).

Firstly, and without a doubt the coolest of the three is yuhwangori (유황오리, sulfur duck), which is a whole duck baked in a special clay pot. There is a place in Jamsil close to my apartment that does this but you need to give them a heads up as it takes hours to bake the dish. The whole duck is treated much like the chicken in samgyetang (삼계탕). It’s stuffed with rice, grains and various other medicinal herbs and spices. In some cases, the duck is apparently fed sulfur, which is said to have health benefits for humans. The duck is then wrapped in cheesecloth and baked for about four hours in a special clay pot that keeps the steam and cooking juices in.

Once cooked the duck is served for the whole table together with the usual suspects at any Korean meal, the banchan (반찬, side dishes). The heat inside the clay pot makes the skin very crispy, not unlike Peking duck. The texture of the meat is similar to the Southern-style barbecued pork shoulder used in pulled pork sandwiches and it’s surprisingly not as greasy as duck can sometimes be.

The second style of cooking duck is in a soup or casserole called oritang (오리탕, literally “duck soup”). This is quite similar to other Korean soups. Generally, the broth is clear, but it can also be served slightly thickened. Regional preferences play a big role in how it is presented and which spices are added to the broth. Gwangju lays claim to the dish, with an entire street in Buk-gu devoted to oritang restaurants, and the soup is also featured in the Korean drama Jewel in the Palace (대장금). While not technically a health food, duck soup is firmly in the “well-being” camp of Korean dishes.

Finally is my favorite: hunje ori (훈제오리, smoked duck). I had this first at an outdoor Korean cultural festival in Yangjae and have been a fan ever since. We cook it a lot here at the hotel and the smell alone will draw me from wherever I am to find it. It’s best when served hot right out of the oven just like in supermarkets where you will see the entire duck being cut up and packaged. I have even had bossam (보쌈, boiled pork) prepared with smoked duck. In this interesting dish, the pork is more roasted than boiled as in regular bossam. It goes especially well with crunchy cucumber and lettuce.

While it may not have the fame of Jeju black pork or first grade hanwoo, Korea’s duck dishes are definitely worth seeking out.

This Old Testament-inspired restaurant handles its ducks from the cradle to the grave: breeding them, feeding them, and then feeding them to customers. Along with your meaty portions, get as many helpings as you want of the vegetable and side dishes. For dessert, try the sweet potatoes baked under the grill. 591-2 Pung-dong, Ilsandong-gu, Goyang-si, Gyeonggi Province. canaanduck.com 031-907-4940

Golden Duck Farm 황금오리농장
Visitors to this “farm” find themselves seated at a stone table which also doubles as the duck grill. Along with generous servings of our de-feathered friends, the restaurant offers other treats including danpatjuk , red bean porridge) and noodles. 873-1 Sinjeong-dong, Yangcheon-gu, Seoul. 02-2699-6974

Ttungattunga Oritdae 뚱아뚱아오릿대
If you’re looking to dine on duck that is as affordable as it is delicious, this is the place. For something completely different, try out duck served as tteokgalbi (떡갈비), which ironically is pronounced rather like “duck galbi.” 3-4 Yonghyeon 1-dong, Nam-gu, Incheon.
뚱아뚱아.kr 032-867-0092