Words and illustration by Jonathan Burrello 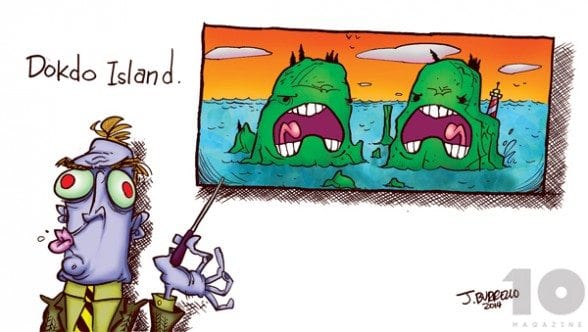 They sat upright, uncharacteristically tense, mouths agape. Twenty-two individual eyeballs scrutinized me with incredulity-betraying widened sclerae. Well, twenty-one individual eyeballs anyway. Lucas had an eye thing. It was my afternoon adult debate class and my second week on the new job and our topic was Dokdo.

The atmospheric discomfort in the tiny room was palpable. In addition to the content itself, the wording of the motion had also added to the discomfort. “Dokdo belongs to Japan,” read the PowerPoint slide. My god, that sounded final.  Involuntarily, I think I muttered, “sorry.” I split the class in twain, giving one half the task of preparing the negative case and the other half the unenviable task of supporting the motion for the affirmative case. They looked as horrified and disgusted as I did that one time I met a girl for a blind date and she had all black contact lenses.

Dokdo, a comically small pair of islands in the East Sea, is notorious chiefly for the territorial dispute surrounding it. This dispute is not just about the islands, but more concerning the adjacent waters. I learned very early on when I first arrived in Korea that one must never say “Sea of Japan” or do or say anything that might insinuate that Dokdo is not wholly and indisputably Korean territory. I learned a lot of things about Dokdo during that debate. Mainly, every single Korean website says it is unquestionably Korean and every single Japanese website says it is unquestionably Japanese.

I also learned that while Korea calls it Dokdo, the Japanese have dubbed it Takeshima and the English speaking world has rather dismissively labeled it the Liancourt Rocks.

It wasn’t long before our class debate devolved into fiery defenses of Korea’s ownership, even citing savage Japanese war crimes during military occupation over a century ago as points. The affirmatives donned mock-Japanese accents and mannerisms to satirically declare Japanese ownership via venomous false arguments obviously intended to deface Japan’s character rather than present a legitimate case. A better teacher might not have laughed so hard.

Sensing my ideological ambivalence toward what was truly a very personal issue for them, they joined forces and turned to me to ask, “Teacher, what do you think?” I wish I could have said that I knew Dokdo was really Korean and that we were just playing devil’s advocate in class to get everyone thinking abstractly, but I couldn’t. “The truth is I have no idea,” I told them. “I’m a stranger here and I don’t have a dog in this fight.”

A cop-out? Perhaps, but I seized the opportunity to commandeer the class and tell them that countries aren’t real and that all culture and national borders are imaginary and we all simply maintain these collective illusions out of a psychotic fear of being confronted with the fact that we truly are not that different from one another, because if we realized that then maybe we would never have any wars. After I got off my hippie soapbox, still high from my anti-jingoism rant, I prepared for the onslaught of scorn and confusion. Instead I heard Clara say, “I like that.” This was accompanied by more nodding and murmurs of approval throughout the class.

Sometimes it’s easy for outsiders, such as myself, to assume too much about Koreans and the stereotypical nationalism. I wrongfully presupposed my class would latch onto this Dokdo thing like a Kodiak bear on a forgotten ham resting atop a hastily vacated picnic area. The tone of the debate shifted drastically. We learned a lot about each other that day.

“Teacher, we all agree with you,” said Maria. A unanimity of affirming guttural noises followed. “But Dokdo is still ours.”