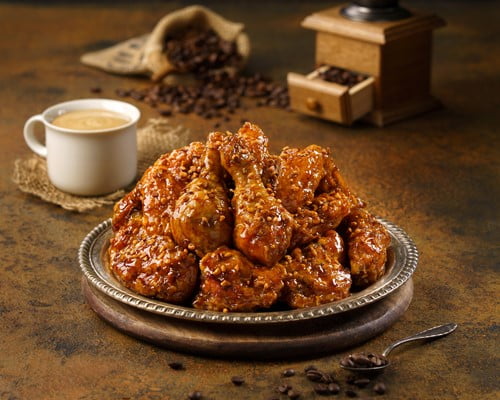 Koreans have a knack for taking popular Western dishes and transforming them into something new and bizarre. Like fried chicken. Some of these Korean fried chicken dishes are (arguably) tasty; others are downright strange. Regardless of how they taste, they are all unique eats, and you can get them through delivery from a Korean fried chicken restaurant near you.

The top strangest creation is Mexicana Chicken‘s Sweet Latte Chicken (also called Dal-La Chicken), which made most people very confused when it was launched. The Korean Economic Institute of America found out that a Korean has approximately 12 cups of coffee per week, so Mexicana created this latte-flavored fried chicken menu to target Koreans’ immense love for coffee.

According to those who have tried it, the dipping sauce that comes with the menu is the one with a strong latte flavor, while the chicken seasoning itself is soy sauce-based, with only a light scent of coffee. The consensus reached by these people is that the taste is unexpectedly good, but that having the chicken without the dipping sauce might be better.

The Pumpkin Chicken creation belongs to BHC. The dish consists of crispy fried chicken covered in a sweet pumpkin-flavored gangjeong (강정) sauce (slightly spicy soy sauce and garlic base). It’s hard to imagine what that would taste like, but some say it’s similar to the taste of sweet potato. A true Korean fried chicken menu indeed!

This is nowhere near as disturbing as the latte or the pumpkin chicken, but it’s still a little odd. It’s featured on the menus of chicken companies such as Kyochon Chicken. The skin of this Korean fried chicken is embedded with rice grains. Trypophobes, beware: it looks somewhat like fried chicken with a bad case of white zits or smallpox.

If you don’t like your cheese in powder form, BBQ Chicken offers a menu called “Cheddar and Gouda Cheese Chicken” (체고치), which is fried chicken coated with a melted mixture of cheddar and gouda cheese. While this one, in particular, looks like it has lots of potential in terms of taste, we’re more concerned about the number of calories involved.

Also in Mexican Chicken’s menu, we find fried chicken covered with hot spicy curry powder. No curry sauce, from the looks of it, but it might be an interesting experience of a unique taste. A similar menu can be found in BHC’s menu, under the name “Curry Queen” (커리퀸).

While honey butter garlic chicken is not unheard of, this Korean version found at BBQ Chicken looks like a dessert more than anything. Catering to Koreans’ sweet tooth (remember sugar is an ingredient in many Korean dishes), we wonder if this chicken would go well with a bag of the very popular Honey Butter Chips on the side.

We hope you have the chance to try these funky menus and we look forward to what other strange creations Korean fried chicken restaurants will come up with in the future.

If you’d like to find out more about how Korean fried chicken came to exist and why it became so popular, check out our article here.

Which strange Korean fried chicken creation are you most curious about? Have you tried any other strange fried chicken menus in Korea? Let us know in the comments!